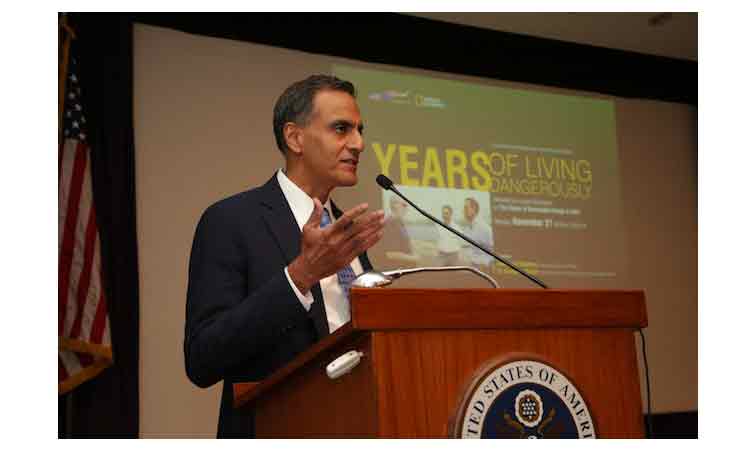 Good afternoon everyone. I’m delighted to welcome you all to the American Center today for a screening of Years of Living Dangerously. This is a National Geographic series starring David Letterman, who was for many years a leading American comedian and late-night talk show host. The episode we are about to watch focuses on the role of solar energy in combating climate change, and some of the challenges we face in India and the United States.

Participating in this series was one of my most memorable experiences as Ambassador to India, and not only because it gave me the opportunity to share the screen with David Letterman (although that wasn’t something I’ll forget anytime soon). This all came about because of the hard work of the U.S. Embassy public affairs section. I read about David Letterman’s trip to India and asked my public affairs teams to get in touch with Letterman’s producers. And before we knew it, they wanted to feature us in the episode to talk about the ways in which our two countries are working together to combat climate change.

U.S.-India leadership on climate was illustrated by our nations joining together to ratify the Paris Climate Agreement, as well as the more recent – and in many ways equally monumental – Montreal Protocol meeting, which has put the world on a path to eventually eliminate the use of heat-trapping hydrofluorocarbon gases.

Clean energy will be one of the biggest areas for joint U.S.-India collaboration in the years ahead. Between now and 2035, investment in the global energy sector is expected to reach nearly $17 trillion. That’s more than the entire GDP of China and India combined. The United States has mobilized nearly $2.5 billion for clean energy projects in India and another $1.4 billion in climate finance for solar projects was announced during the Prime Minister Modi’s June visit to Washington. We’re also supporting India’s landmark solar initiative that was announced at COP21, the International Solar Alliance. Dr. Arunabha Ghosh, the CEO of the Council on Energy, Environment and Water, has been a critical force behind ISA and he is featured in this episode.

Every day we see a new example of how India is harnessing the force of the sun to power its future. One of the more memorable scenes from tonight’s film – and I apologize in advance for the spoiler – is set at the Azure Power solar installation on the banks of the Yamuna River. This 1-megawat facility happens to be located adjacent to Indraparshtha Thermal Power, a decommissioned coal-fired plant. It was a very striking dichotomy of the past and the future– a facility that harnesses the power of the sun to provide clean energy for thousands of homes sitting on ground previously used to store sky-blackening coal.

The scene is also indicative of what our two countries are capable of achieving when we work together. Azure Power, the owner of the solar facility, has enjoyed a long-standing partnership with the United States, starting in 2009 when our Overseas Private Investment Corporation financed its project in the Punjab, which represented India’s first privately-financed, grid-connected solar installation. Coming at a time when Indian solar energy providers struggled to obtain financing, this assistance was critical to the company’s remarkable success. And I’m happy to note that Azure Power made its debut on the New York Stock Exchange last month.

Azure has received multiple additional rounds of U.S.-provided funding, has benefited from state-of-the-art U.S.-manufactured solar panels, and has received best-in-class technical assistance from the Department of Energy. The silver racks holding its solar panels – which you will see in the film – were designed and manufactured by a California-based company, NEXTracker. The racks use high-tech sensors to track the sun’s daily arc and automatically pivot each panel to directly capture its rays, greatly increasing the plant’s power-generating capabilities. And last month, Azure inked yet another deal with OPIC, this time for a $20 million loan to construct 19 megawatts worth of new rooftop solar projects across the country.

And the story of Azure’s cooperation with the United States is not unique. SunLink Corporation, a California-based company, is partnering with Indian companies to deploy 1.4 GW in solar over the next five years. And operating through PACE – the Partnership to Advance Clean Energy – our two countries are hard at work to generate the energy our economies need in a manner that won’t harm our fragile planet. Listing the examples of our collaboration would take too long to do now, but believe me when I say they are many and wide-ranging, from a multi-million-dollar greening-the-grid program that will enable the national power grid to handle green energy, to research and development efforts aimed at creating a new class of energy efficient air conditioners.

There will of course be challenges to these ambitious renewable goals. One of the things I like most about this documentary is that it showcases the obstacles facing renewables in both India and the United States, and the energy of ordinary citizens who are leading the charge and demanding from their governments a clean energy future. That’s not going to change – the fight against climate change is a cause embraced by ordinary citizens which provides it with a powerful momentum. So as we turn our attention to this excellent series, I hope that you will leave this theater both concerned about the need for drastic change and also energized by the exciting new opportunities we have to create a new future for our planet, a planet in which economic growth and environmental justice go hand in hand. Thank you again for joining us and I hope you enjoy this episode.