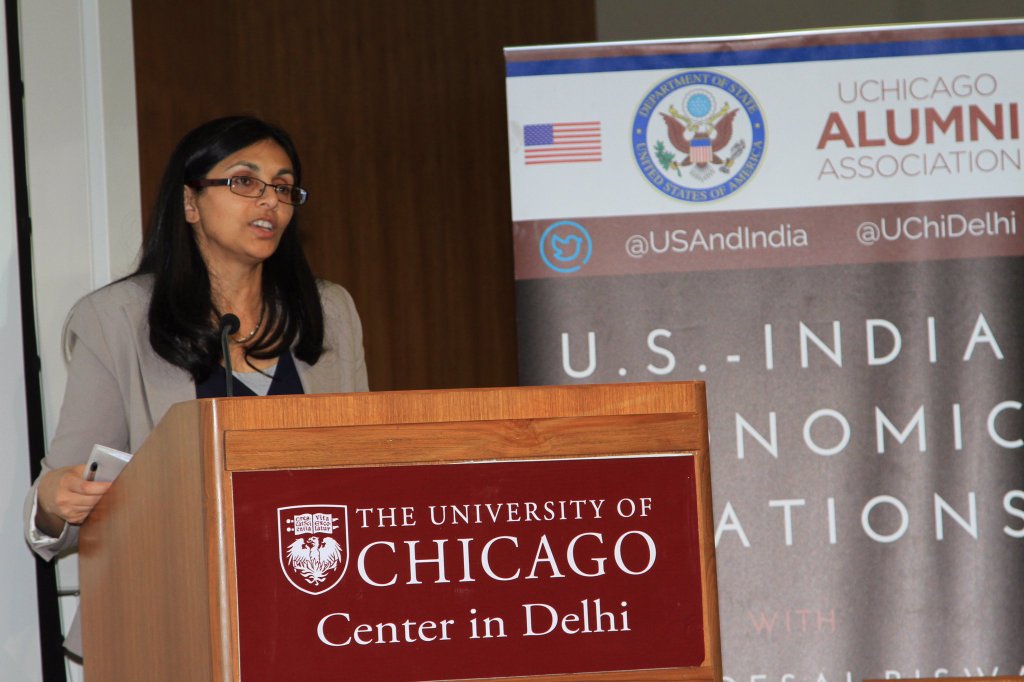 Thank you for that kind introduction Aditi and thank you all for a very warm welcome, and of course a big thanks to the University of Chicago Alumni Club of India for hosting this event.  It is wonderful to be back here.

After my last visit to this center, which was exactly a year ago, I made it a point to visit the University and walked around the beautiful Hyde Park campus.  I had a chance to meet with with the mayor’s office and, to look at some of the innovative approaches to urban planning, as well as to see how some of the solutions they’ve developed there could translate to India’s own urbanization challenge.  The University’s new Mansueto Library, the planned Institute for Urban Innovation, and the EPIC-India program at the University’s center here in Delhi are all great testaments to the groundbreaking work that UChicago is doing in this field.

I learned a lot of interesting things, including the fact that Delhi and Chicago have a sister city relationship.  But one statistic that really struck me, which I haven’t been able to get out of my mind, is that each year India’s cities alone will grow by the equivalent of the entire residential and commercial square footage of the city of Chicago. So India will basically be building, in aggregate, a new Chicago every single year.

The pace and scale of India’s past and future urbanization is simply staggering. Twenty-five years ago, if you drove 30 kilometers south of here to Gurgaon, you’d see mostly farmland, and the population then was about 120,000. Today, Gurgaon has 2.3 million residents and a gleaming skyline of glass and steel.

India’s cities have added 90 million new residents over the last 10 years, and in the next 15 years, 250 million more Indians will have moved into cities, bringing the urban population to some 600 million – nearly twice the population of the United States today. Delhi will likely surpass Tokyo to become the largest city in the world, and Ahmadabad, Bangalore, Chennai, and Hyderabad will all become megacities, with over 10 million people each.  The GDP of Mumbai’s metro area alone will be larger than Malaysia’s is today.

So when we talk about economic growth in India, we’re basically talking about the growth of its cities. Over the next decade and a half, India’s cities could account for 70 percent of all new jobs and 70 percent of GDP. The cities are where most of the one million people entering India’s workforce every month will find their jobs. But to pull all this off will require a tremendous amount of investment – about one trillion dollars over the next 15 years, an unprecedented amount of funding and about eight times what India is spending today. According to McKinsey, 70 to 80 percent of the infrastructure that India needs by 2030 is yet to be built.

So the right investments in urban infrastructure and services will be critical for India’s economic growth. The right policies could help India leverage its demographic dividend and launch hundreds of millions of people out of poverty and into the global middle class, transforming India and the region. According to the National Intelligence Council, by 2030, “India could be the rising economic powerhouse that China is seen to be today… a strong economic engine in India could lay down new foundations for prosperity and regional cooperation in South Asia.”

India’s economy could drive global economic growth, bringing shared prosperity across the world, including to the United States. And that is why we have made economic diplomacy such a major pillar of our relationship. Trade between our nations has grown by a factor of five over the last 15 years, to over $100 billion. And we are working hard to accelerate that growth. Last year, we elevated our economic ties by holding our first-ever Strategic and Commercial Dialogue. The new commercial track of the dialogue had several work streams, such as facilitating help to build India’s smart cities, and strengthening the business climate.

As part of that latter effort, we’ve also reinvigorated our CEO Forum, which gives our business leaders input into government policy-making in trade and investment, technology exchanges, and workforce development. We were also able to break through a deadlock on the Trade Facilitation Agreement at the WTO, and, through our Trade Policy Forum, we agreed on comprehensive work plans in services, agriculture, intellectual property, and manufacturing.
These moves are already paying dividends, and American investors are showing with their dollars that they believe in India. According to data compiled by the U.S. Treasury, our companies now invest more in Indian equities –over 12 billion dollars in 2015 – than they do in China. And according to the U.S.-India Business Council, U.S. firms invested over $15 billion in India in the last two years, and will reportedly sign deals worth another $27 billion over the next two years.

And we believe that U.S. FDI could double if India continues to liberalize its investment regime. That could mean more U.S. firms bringing their comparative advantages in technology, expertise, and capital, creating more jobs, skills, and growth. We strongly support Prime Minister Modi’s “Make in India” campaign, which envisions India as an elite manufacturing hub. But companies involved in global manufacturing need transparency, predictability, and legal certainty.

India’s government is working on some important reforms to make it a more attractive destination for FDI, including the announcement of the Single-Window Clearance process for foreign investors, and the easing of FDI restrictions in sectors including construction, insurance, stock markets, and railways.

These are all great moves, and our companies are excited about them. They want to invest more in India because they know that it will be one of the 21st century’s great growth stories. And one of the best tools out there to increase U.S. investment in India would be a high-standard bilateral investment treaty (BIT). A high-standard BIT would send an important signal to U.S. investors that India is open for business.  It would also support some of India’s top initiatives, such as Digital India, Smart Cities, and Make in India.
We realize there’s some work to be done before we get there, and we’re anxious to get started. In the meantime, our governments are working to strengthen the ties between our innovators and entrepreneurs.

For example, we recently connected the Los Angeles Cleantech Incubator with Ahmedabad’s Center for Innovation, Incubation, and Entrepreneurship. Last year, they signed an MOU at an event in California, with Prime Minister Modi standing right beside their representatives. Ahmedabad’s incubator is now part of the Los Angeles incubator’s Network for Global Innovation – giving it new opportunities for investment and partnership. The two organizations also agreed to create a Landing Pad, a reciprocal program that enables cleantech entrepreneurs to better access the California and Indian markets.   And our long-running U.S.-India Science and Technology Forum has connected more than 14,000 American and Indian scientists.  The Fulbright and Fulbright-Nehru programs, meanwhile, have resulted in the exchanges of more than 18,000 Indian and U.S. students and scholars across the full range of academic disciplines – and we can proudly count some in this room among the distinguished alumni of those programs.

We’re building these connections because we know that our own future success is inextricably linked to India’s success. We know that a strong, prosperous India can be our equal partner in addressing some of the most pressing regional and global challenges of our time, whether it’s securing the seas or fighting climate change.

And while achieving that potential will take a lot more legwork by our diplomats, and negotiations by our trade representatives, and cooperation by our military officers – it will ultimately be built on the connections between our people, especially between the types of entrepreneurs and innovators that are filling this room today.

So I want to thank you, not just for the opportunity to address you today, but for the time and the effort that you are also putting into this relationship between our two great nations, what President Obama has rightly called the “defining partnership of the 21st century”. We appreciate all that you’ve done, and we look forward to your future achievements. So thank you, I’m looking forward to our discussion.