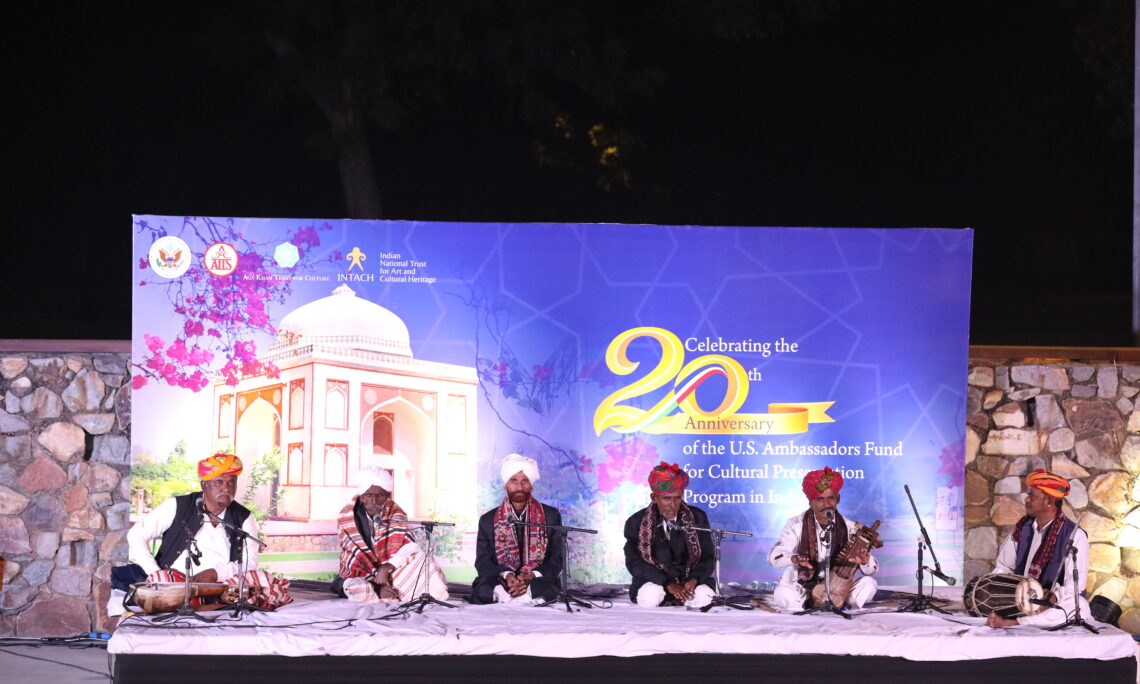 New Delhi:  On November 29, the United States Mission in India commemorated 20 years of cultural collaboration with India through the Ambassadors Fund for Cultural Preservation by welcoming guests from the Ministry of Culture, the private sector, and civil society to a special celebration.

“India’s rich cultural heritage has had a profound impact on the United States, and on the world.  We’re proud to have helped to preserve aspects of this heritage by investing more than $2 million over the past two decades for the documentation, conservation, and restoration of 23 key historic sites and intangible heritage properties in India,” noted U.S. Chargé d’Affaires Patricia Lacina in her remarks at the event.   “The United States is proud to partner with India.  We remain committed to our joint efforts to protect, preserve, and promote cultural heritage and look forward to continuing our important work in the future.”

“Cultural heritage preservation is much more economically valuable than we think.  Not only does it bring in tourism; it also empowers local communities with jobs, education, and autonomy,” said Ratish Nanda, CEO of the Aga Khan Trust for Culture.  AIIS Director General Purnima Mehta highlighted how AFCP projects “promote and advance mutual understanding between the citizens of the United States and India.”  Vandana Manchanda, INTACH Projects Director, added, “the AFCP brings together conservation and museum experts, architects and designers, and skilled craftspeople – all with a shared passion for preserving and protecting India’s cultural heritage.”

Organized by the U.S. Embassy in collaboration with the Aga Khan Trust for Culture, the American Institute of Indian Studies (AIIS), and the Indian National Trust for Art and Cultural Heritage (INTACH), the AFCP 20th Anniversary celebration took place at the outdoor amphitheater of the Sunder Nursery, located adjacent to the UNESCO World Heritage site Humayun’s Tomb in Delhi.

The program included remarks by senior officials, the release of a monograph that documents endangered musical traditions of western Rajasthan followed by a live performance, a photo exhibition, and the launch of a U.S. Embassy website page (https://in.usembassy.gov/education-culture/ambassador-fund-for-cultural-preservation/) featuring details on AFCP project sites across India.

Background on the U.S. Ambassadors Fund for Cultural Preservation

At the recommendation of the 106th Congress in 2001, the U.S. Department of State created the Ambassadors Fund for Cultural Preservation (AFCP) to demonstrate American values and respect for other cultures.  Since its creation, the AFCP has provided financial support to more than 1,100 projects in 133 countries around the world.  The AFCP grants program is administered through an annual competition by the Bureau of Educational and Cultural Affairs.

AFCP projects preserve a wide range of cultural heritage, including:  historic buildings and archaeological sites; cultural items such as archaeological and ethnographic objects, paintings, and manuscripts; as well as indigenous languages and other forms of traditional cultural expression.  The projects also support post-disaster and post-conflict recovery, create economic opportunities, and build mutual understanding.

The Ambassadors Fund has supported more than 1,100 projects worldwide since 2001.  In India, the American people have invested more than $2 million over the past two decades for the documentation, conservation, and restoration of 23 key historic sites and intangible heritage.  Some examples include:

AFCP has also provided more than $1.3 million to support cultural heritage preservation in Bhutan, including through a project which led to the inventory and documentation of 54 key cultural heritage sites.  For more information, visit https://eca.state.gov/cultural-heritage-center/ambassadors-fund-cultural-preservation.