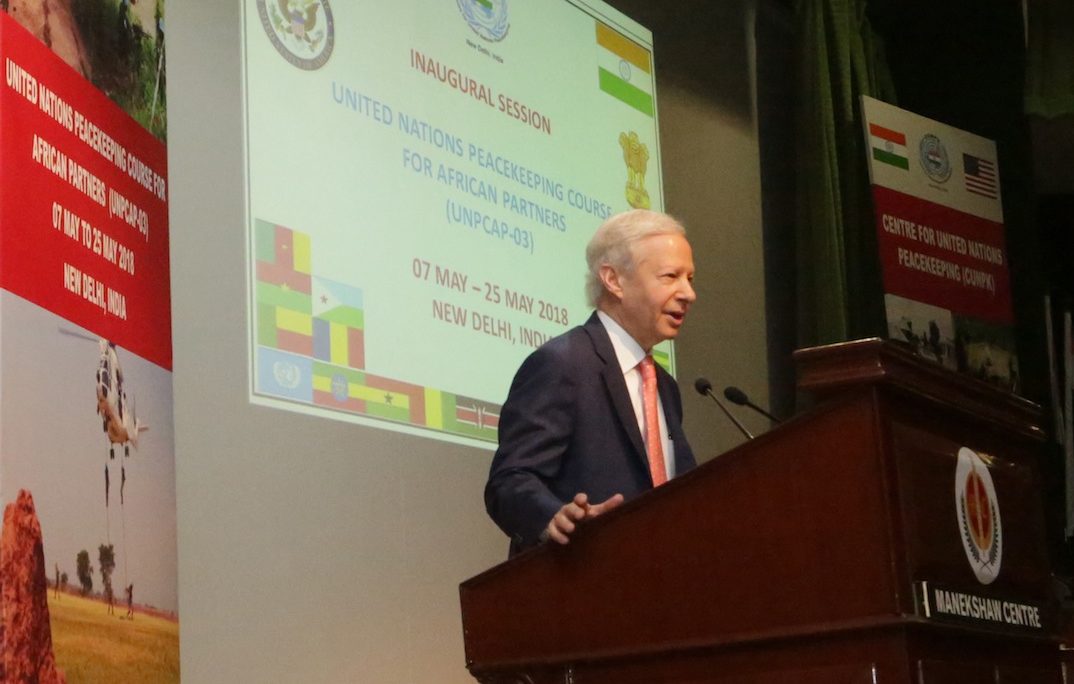 Remarks by Kenneth I. Juster

Director General Sharma, Secretary Ghanashyam, Distinguished Guests:  It is a great honor to be here this morning and have the opportunity to reflect on the important work that all of the nations represented in this room are doing to advance United Nations peacekeeping, and expand our cooperation.  I would like to thank the staff of the Centre for UN Peacekeeping for your hard work and collaboration with our Embassy, the U.S. Africa Command, and the U.S. Global Peace Operations Initiative in Washington, D.C.  And I am most pleased to recognize my fellow Ambassadors, who have joined us this morning, as well as the course participants, who have traveled long distances to be part of this outstanding program.

This is the third iteration of the “UN Peacekeeping Course for African Partners.”  It reflects the strong interest of the United States and India in partnering with African countries to further our mutual interests.  India’s proud peacekeeping tradition is commensurate with its increasing role as a global leader.  Initiatives such as this show that India is expanding its impact well beyond South Asia.

This year marks the 70th anniversary of India’s independence, which coincides with the 70th anniversary of UN peacekeeping, and we certainly welcome India’s continued commitment to peacekeeping.  In his “Tryst with Destiny” speech, Prime Minister Nehru pledged that India would “make her full and willing contribution to the promotion of world peace and the welfare of mankind.”  This idea is also embedded in India’s Constitution, which explicitly aims to “promote international peace and security.”  This makes India one of the only nations in the world whose foundational document embraces such a responsibility.  Indeed, historically, no country has contributed greater numbers to UN peacekeeping than India, which has deployed more than 180,000 Indian troops and police, who have served in 49 of the UN’s 69 peacekeeping missions.  And many of those missions have been in sub-Saharan Africa.

The more than 15 African countries here today have also made significant contributions to peacekeeping.  We thank you and applaud you for that.  And we encourage your continued engagement in these most important efforts.

Today, we celebrate another chapter in U.S.-Indian cooperation, by working with our African partners to enhance UN peacekeeping capacity.  The goal of this training program is to build capacity at a time when the need for well-trained peacekeepers is more critical than ever.  As we reflect on the last seven decades, all of us – the United States, India, and each of the African countries that have sent officers to attend this program – are here because we are of a like mind on the importance of peacekeeping in the furtherance of global peace and security.

It is important to recognize that the challenges faced by today’s peacekeepers – including the peacekeepers seated in this room – are growing and changing across missions.  Two-thirds of all UN peacekeeping operations are now in active conflict zones.  This is the highest percentage ever.  Meeting the challenges of so-called “failed states” and the extremist elements that fill the vacuum created by instability requires troops and police to perform at the highest levels of operational effectiveness.  And this, in turn, requires the will of the international community to build strong and capable peacekeeping forces.

This training course is an important way in which we can work together to share best practices among peacekeepers and trainers.  Our trainers can help to instill a culture of performance that is geared toward effectiveness in missions and strong leadership.  The participation of both police and military officers in this course reinforces the importance of exchanging ideas and sharing experiences.

The United States and India share an abiding commitment to our partnerships with many of the nations of Africa, and we are proud to be working together with you to build your security capacity.  As we have seen with the African Union Mission in Somalia, African nations have shouldered some of the heaviest security burdens in the world.  Yet the demand for UN peacekeepers, especially with knowledge of local conditions and terrain, continues to grow in Africa – and elsewhere.

Through this course, participants will gain valuable knowledge and, as a result, will be able to train others when they return home.  Our goal in this program is to leverage each other’s expertise and to learn from one another, so that you can build self-sustaining programs in your home countries.  This is a collective exercise and a learning opportunity for all of us; your participation and your contributions are not only helpful, but fundamental to the success of the course.

I also encourage each of you to seek to develop personal relationships with your classmates, which can be invaluable over time, especially if you find yourselves serving together at some point in the future.  Our goal is to collaborate as equal partners and learn from one another.

In conclusion, I would like to thank the course participants and instructors, including India’s Centre for UN Peacekeeping; its Director, Colonel Sehgal; and the U.S. instructors who are here today.  Thank you as well to our colleagues at the UN Political Division of the Ministry of External Affairs, who have made this entire initiative possible, and who have continued to be as passionate as we are about increasing our collaboration in this area.  And, of course, our gratitude and respect goes out to all those in blue helmets protecting civilians in dangerous spots around the world.

The United States is committed to this cause and will remain a lasting partner with all your nations.  I sincerely wish you a most productive three weeks of training.