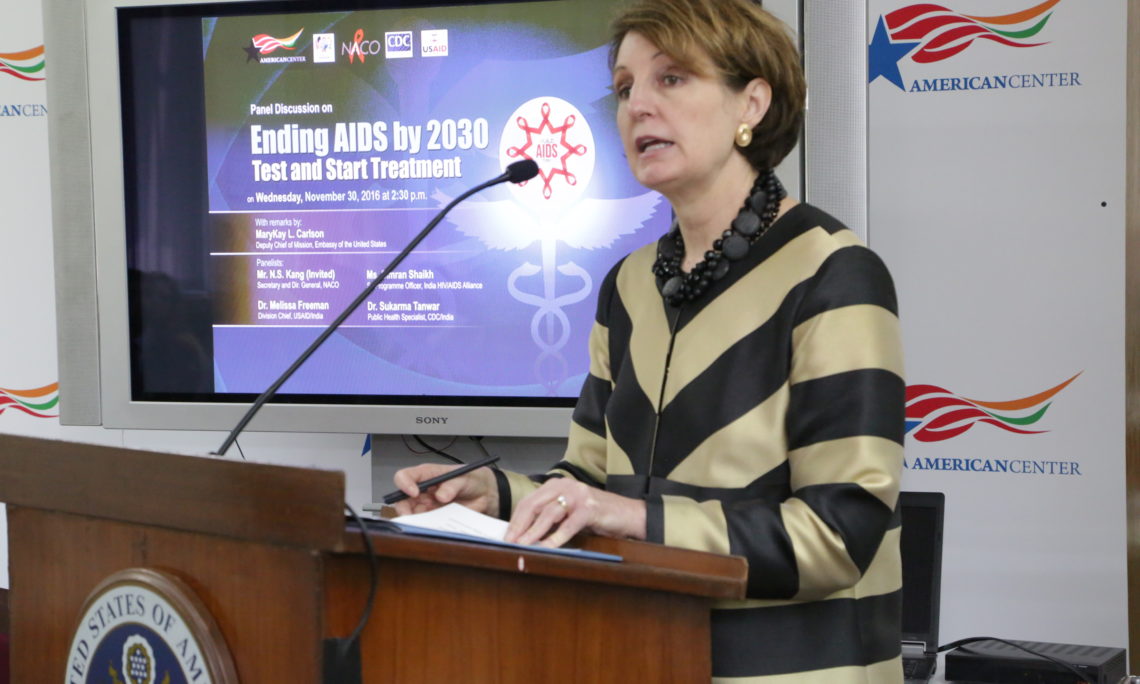 December 1st is World AIDS Day. This is a day of remembrance for those who have lost their lives to AIDS. This day also provides an opportunity for governments, donors, civil society, and other stakeholders to raise awareness, prevent new infections, improve the lives of people living with HIV, and work toward an AIDS-free generation by 2030.

To commemorate World AIDS Day, the U.S. Embassy invited representatives from the Government of India, community-based organizations, technical partners, advocates and patients to participate in a discussion on how we can work together to end AIDS by 2030. During the inaugural address MaryKay Carlson, Deputy Mission Chief at the U.S. Embassy, reaffirmed the U.S. Government’s commitment to fight this epidemic, stating, “With strong partnerships and collective efforts, an AIDS-free India is within reach.”

The U.S. Government commends India’s progress and commitment to end the AIDS epidemic. Through the U.S. President’s Emergency Plan for AIDS Relief (PEPFAR), the United States is heavily invested in tackling the AIDS epidemic. PEPFAR is the largest commitment by any nation to address a single disease. This program has invested over $300 million to support India’s national AIDS program. The United States works closely with the Government of India to prevent new infections, improve the lives of people living with HIV, and support those who are being weighed down by stigma and discrimination against the disease.

The Government of India has made tremendous progress in identifying those who are infected with HIV, and to make treatment available to the people living with HIV and AIDS. Since 2001, new HIV infections have been reduced by 66 percent. This is an indication that the programs and messages are reaching those who are at risk of contracting HIV. This is an impressive accomplishment. In fact, this is why India’s national AIDS program is recognized as one of the most successful public health programs in the world.