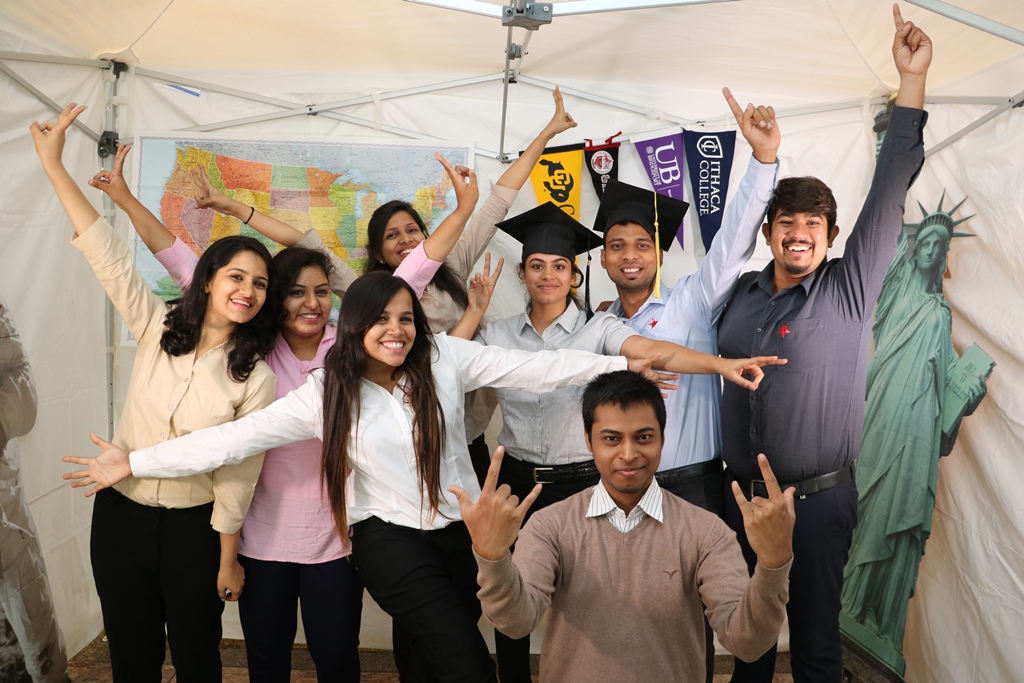 Excited to continue their studies in the United States soon, Indian students at the U.S. Consulate Mumbai enjoyed the Student Visa Day celebrations on June 8.

Mumbai – In tandem with U.S. consulates across the country, the U.S. Consulate General in Mumbai heralded opportunities for higher education in the United States by declaring June 8 to be “Student Visa Day.”  Consular officers spent the day adjudicating visas only for students who had been accepted into U.S. institutions, speaking with more than 1,300 students in one day.  In addition, the consulate hosted a roundtable discussion featuring alumni, current students, and parents of current students who shared their personal stories about the educational and professional development opportunities offered by American colleges and universities.

Consulate Deputy Principal Officer Jennifer Larson said that more than 4,500 students appeared for visa interviews today across the U.S. Mission to India’s five visa-issuing posts.  “With nearly 5,000 colleges, universities, and vocational schools certified to enroll international students, the United States offers numerous choices for students looking to study abroad.  Whatever they choose, I want students to know that the United States welcomes international students and recognizes how they enrich our classrooms and our communities,” said DPO Larson.  Larson added: “The United States offers a world class education to students.  And students who come to the United States benefit from a lifetime relationship with our country, as well as the fantastic, career-enhancing alumni networks that schools provide.  I had the fortune of experiencing a rich, multi-cultural environment during my days at University of California, Berkeley.  The exchange of thoughts and ideas with my international classmates, many of whom are dear friends today, greatly enhanced my worldview and career path.”

TV presenter Leeza Mangaldas, who studied English and visual art at Columbia University, attributes her worldview to the inclusive climate she enjoyed at Columbia.  “My time at Columbia truly shaped how I think, as well as how I express myself.  American universities prepare you for a long-term global appreciation of the subjects of your choice and connect you with like-minded people who you keep learning with throughout your life,” said Mangaldas.

Mohun Bagan and Delhi Dynamo’s star footballer Kean Lewis, who studied sports administration at the Fairleigh Dickinson University in New Jersey and played as a midfielder on his college soccer team, said, “My family was apprehensive initially when I decided to study in the United States, as they thought that studies would take a backseat to my love for sports.  Thankfully, the strong infrastructure in place at Dickinson not only helped elevate my football skills, but also ensured I balanced my academic pursuits with equal flourish.  The warmth, the acceptance, and the encouragement I received during my stint at Dickinson is cut out deep in my memory and is a big part of who I am today.”

Panelist Ryan Pereira, the regional officer for the United States India Educational Foundation (USIEF), shared information about EducationUSA—the official source of accurate, current, and comprehensive information on higher education in the United States.  Students can begin their higher education journeys with a visit to one of the seven EducationUSA advising centers across India or by logging onto educationusa.state.gov.   EducationUSA advisers can help students know more about a host of topics, such as the admissions process and standardized testing requirements, ways to finance a U.S. education, the student visa process and preparations for departure to the United States.

Student Visa Day is an annual event across the U.S. Embassy and consulates across India.  The U.S. government is committed to helping qualified Indian students reach their educational goals by choosing to pursue an education in the United States.