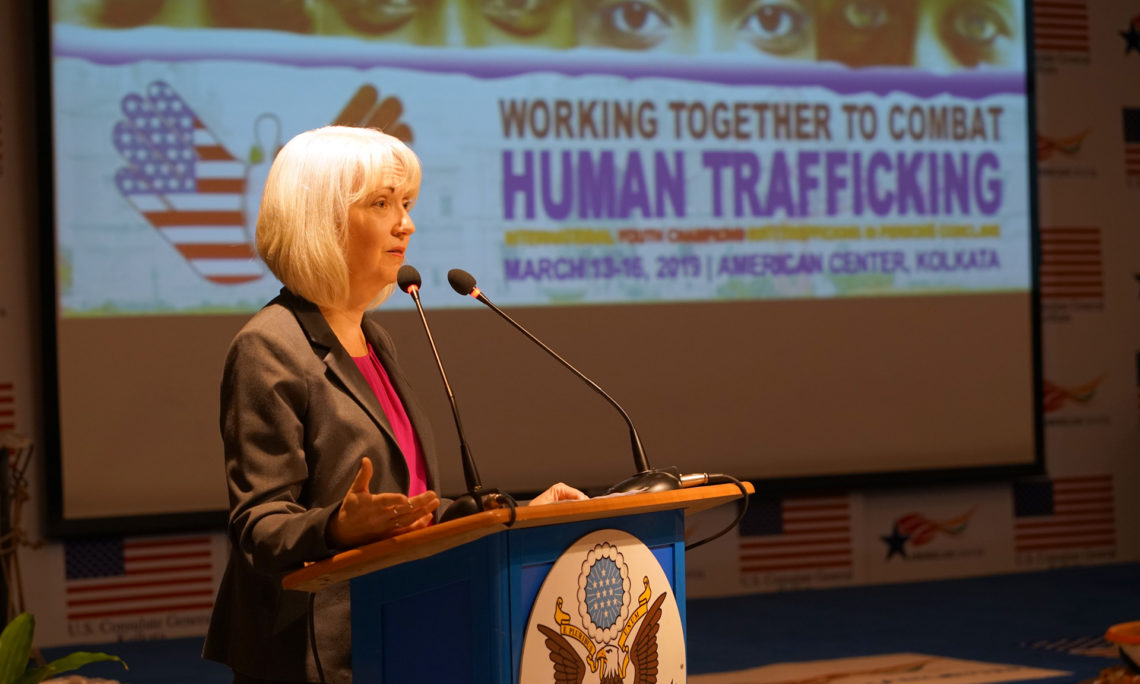 KOLKATA – The Anti-Trafficking-in-Persons Youth Champions Conclave, hosted by the U.S. ConsulateGeneral in Kolkata and the New Delhi based NGO Shakti Vahini on March 13-16 at the American Centerin Kolkata, is the eighth international gathering of stakeholders that will bring over 130 youth leaders and stakeholders from the U.S., India, Nepal, and Bangladesh dedicated to one goal, ending human trafficking.  The U.S. Consulate General hopes synergies between stakeholders at the conclave will lead to real world action after all the participants return to the communities in their respective communities.

In her inaugural address, U.S. Consul General Patti Hoffman said, “Trafficking in persons (TIP) remains a global issue, and the United States is committed to continuing to working together with international partners to end trafficking.  It is not enough merely to denounce this horrific assault on human dignity; we must actively work to prevent and end this barbaric exploitation of innocent survivors. The United States and India, as enduring global partners in the 21st century, are committed to working together to end human trafficking.”

The Founder of Shakti Vahini Ravi Kant noted, “The role of youth is important in the fight againsttrafficking. Youth leaders are the drivers of social change and they are the most affected by this crime.  Anti-TIP issues need to be addressed on Indian campuses.  The youth can contribute significantly to the cause by raising awareness that can lead to real impact. As internet-connectivity has opened up new threats to todays’ young people, the youth need to be ever more vigilant and aware to combat the scourge of TIP in their communities.”

The U.S. Consulate General believes that, when we empower young leaders, we see change.  In West Bengal, there is an example of positive change with the Swayamsiddha campaign, started as a pilot project in the South 24 Parganas district by the West Bengal Police.  This initiative has focused on strengthening response mechanisms in partnership with students and community groups, which has created a battalion of young women peer leaders.  In fact, the model will now be replicated in all districts of the state.  Last year, it was a privilege to showcase the Swayamsiddha success story at our anti-TIP Conclave, and we will continue to work with the West Bengal government to share this model with other states in India.

This year’s conclave will also cover the growing menace of online sexual exploitation and highlight the importance of engaging the private sector as a key partner.  Dr. Vanessa Bouche and some of her students from Texas Christian University in the United States will lead workshops on campus activism, community activism, and professional activism throughout the conclave.

On March 15, the U.S. Consulate General will host a women’s empowerment festival at 2:30 p.m. at the American Center, where the general public can learn about the inspiring work of anti-TIP activists, explore ways to engage with over 20 NGOs working to end trafficking, and purchase various handicrafts and items made by members of the NGOs.  The Consulate will also host a presentation comprising digital and liveperformative storytelling at the Indian Council for Cultural Relations (ICCR) starting at 6:30 p.m., all are welcome.