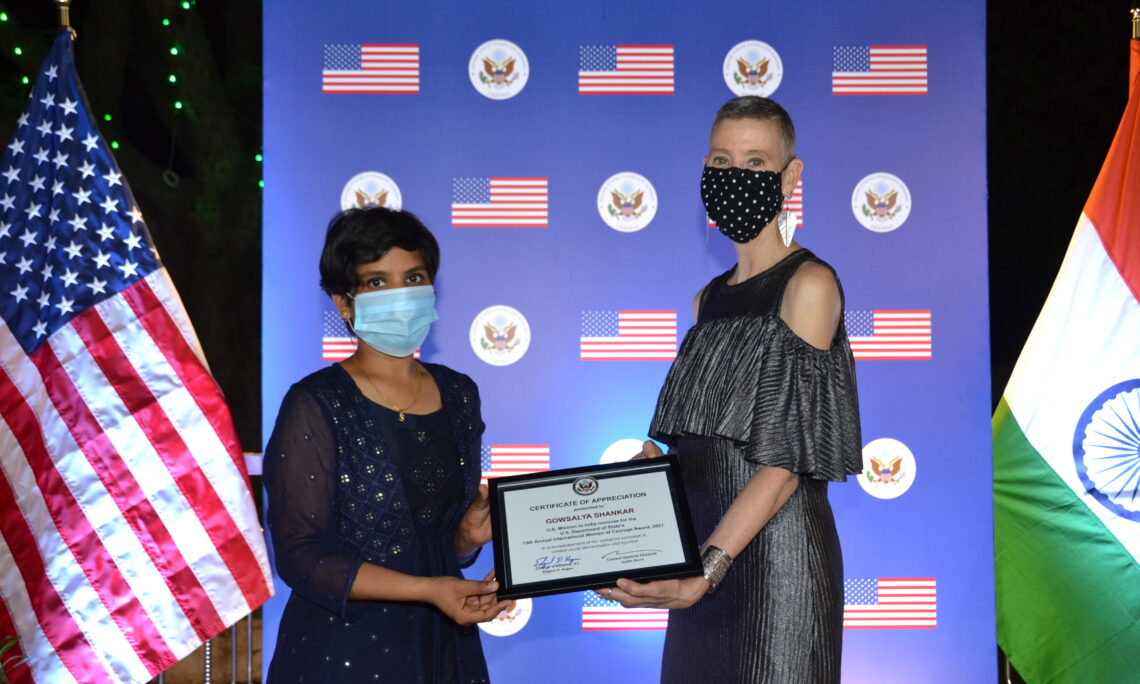 Chennai, March 12:  On March 11, the U.S. Consul General in Chennai Judith Ravin hosted an event titled “Courageous Women Inspire a Better World.” At the event, the Consulate honored Tamil Nadu-based anti-caste activist and human rights defender Gowsalya Shankar. Ms. Shankar was U.S. Mission India’s nominee for the 2021 U.S. Secretary of State’s International Woman of Courage (IWOC) Award. This award honors women who have demonstrated exceptional courage, strength, and leadership in acting to improve the lives of others, from families to communities to countries – often at great personal risk and sacrifice. The Hindu Chairperson Dr. Malini Parthasarathy and National General Secretary of the People’s Union of Civil Liberties Dr. V. Suresh also spoke on the central theme of courageous women.

In her late husband’s honor, Gowsalya launched the Shankar Social Justice Trust in March 2017 to fight atrocities against caste-based violence. The trust provides psychological, legal, and moral support to victims and builds awareness against social discrimination and injustice. Speaking on the occasion, Gowsalya said: “Women’s History Month is not just another occasion to celebrate.  This is the time for women to take a pledge to fight for their rights…. The moment I resolved to fight against caste-based discriminations that dehumanize human beings, I grew new wings.  It gave me confidence and courage to fly higher and higher and touch the sky.”

U.S. Consul General Judith Ravin presented Gowsalya with an IWOC Award Certificate of Nomination at the event. Addressing the socially distanced guests, U.S. Consul General Judith Ravin said: “The United States is committed to gender equality, social inclusion, and advancing the status of women and girls globally as a foreign policy priority. Global prosperity, security, and stability cannot be achieved without the full participation of women and girls in the economic, social, and political spheres.”

Each March, the president of the United States designates Women’s History Month to shine a light on the extraordinary legacy of trailblazing women and girls who have built, shaped, and improved upon our societies. In this year’s proclamation, U.S. President Joe Biden noted that in our current moment of crisis, women continue to lead.  From vaccine researchers to public health officials to the countless heroines on the frontlines, women are working around the clock to defeat COVID-19.  Women, and particularly women of color, also make up the majority of America’s essential workers, including educators and childcare providers, grocery store workers, farmworkers, and others who are keeping our families, our communities, and our country afloat.  This year has also marked an historic milestone of women’s leadership 232 years in the making, with the inauguration of America’s first female Vice President Kamala Harris.

Background: Since the inception of the International Women of Courage award in 2007, the U.S. State Department has recognized more than 155 women from more than 75 different countries. U.S. diplomatic missions overseas nominate one woman of courage from their respective host countries, with finalists selected and approved by senior Department officials. On March 8, U.S. Secretary of State Antony J. Blinken hosted the annual IWOC virtual ceremony to honor a group of extraordinary women from around the world, including Muskan Khatun who has been instrumental in bringing about new legislation criminalizing acid attacks and imposing strong penalties against perpetrators in Nepal. The First Lady of the United States, Dr. Jill Biden, delivered remarks to recognize the courageous accomplishments of these women. Learn about this year’s IWOC award recipients: https://www.state.gov/2021-international-women-of-courage-award-recipients-announced/