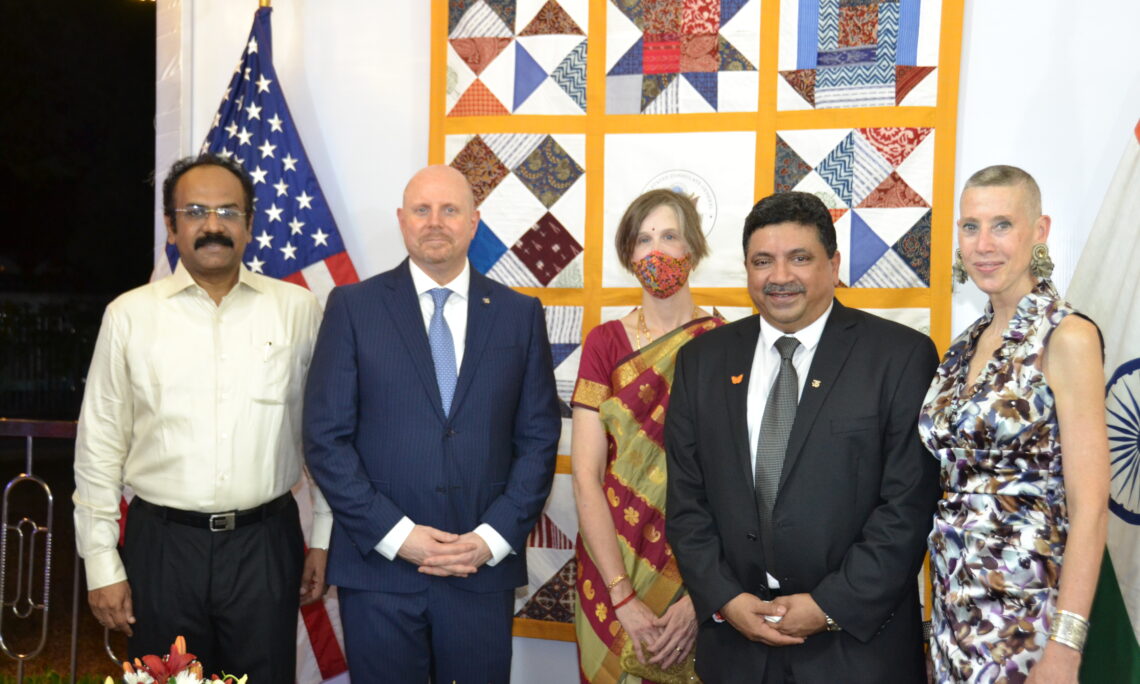 Chennai, June 17:  The U.S. Consulate General in Chennai celebrated the 246th anniversary of U.S. independence as well as 75 years of U.S.-India partnership in Chennai on Thursday, June 16, 2022.  Independence Day, also referred to as the Fourth of July in the United States, commemorates the adoption of the Declaration of Independence on July 4, 1776.

Consul General Judith Ravin was the master of ceremonies.  Acting Deputy Chief of Mission (A/DCM) for the U.S. Embassy in New Delhi Brian Heath presided over the celebration this year from the Consul General’s residence in Chennai, while Minister for Department of Industries, Tamil Official Language, Tamil Culture, and Archeology Thangam Thennarasu and Minister for Finance and Human Resources Management Dr. Palanivel Thiaga Rajan attended as Chief Guests representing the government of Tamil Nadu.  The event included a video highlighting historical moments over the past 75 years of official U.S.-India diplomatic relations.  Chennai-based neo-jazz singer Susha Raja performed the national anthems of both the United States and India.

A/DCM Heath addressed the guests and spoke about the strong bond between the United States and India.  He said: “United in this shared vision, we are tackling some of the world’s most pressing challenges together.  From fighting the climate crisis, to leading the global pandemic response, and advancing a free and open Indo-Pacific, the United States and India are collaborating across nearly every field of endeavor to improve the lives of our peoples and contribute to the global good.  Our partnership at 75 demonstrates how vital U.S.-India cooperation has been in realizing a more prosperous, free, connected, and secure world and how much potential there is for our partnership to grow further.”  He also thanked the guests for their role in the extensive ties between the two countries.  “You are increasing our bilateral trade and investment, conducting research to combat emerging health threats and address climate change, fostering innovation across a diverse range of sectors, and sharing best practices through academic and professional exchanges.”

Representing Tamil Nadu Chief Minister M.K. Stalin, Industries Minister Thangam Thennarasu and Finance Minister Palanivel Thiaga Rajan were present to deliver remarks.  Industries Minister Thennarasu extended greetings in honor of the U.S. Independence Day and the 75th anniversary of U.S.-India partnership.  He invited U.S. businesses to invest in the state, noting that “Tamil Nadu has some natural advantages in seaports and airports and is strategically placed for industrial growth.  The state is now a preferred destination for investment because of the progressive and proactive government.”

Finance Minister Dr. Palanivel Thiaga Rajan commented that the years he spent in the United States helped shape his life.  “In a lot of ways, America gave me a special kind of niche.  People-to-people connect runs a lot deeper and we are sure these ties will grow and strengthen the U.S.-India relationship.”

Chennai-based quilt maker and Bespoke designer, Cognac by Manjeri, created a signature piece for the occasion that incorporates American quilt patterns used to guide enslaved people escaping to freedom on the underground railroad in the late eighteenth century.  Quilting is an early American folk art that is still popular today.  The piece merges the symbolism of Flag Day and Juneteenth, bookend U.S. national holidays in June.