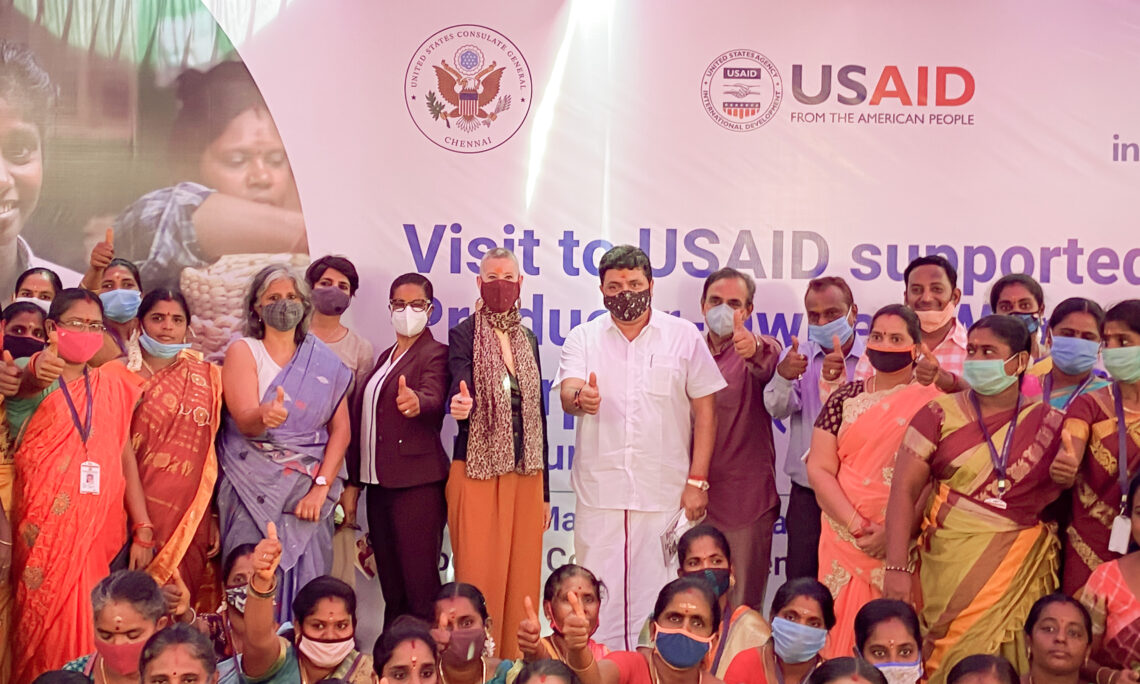 Initiated in September 2019, USAID’s POWER project empowers women from rural communities to become micro-entrepreneurs by helping them shift work closer to their homes and offering them a steady source of income.  POWER also empowers rural women to become micro-entrepreneurs who collectively own and operate their enterprises.  Developed in partnership with the Industree Crafts Foundation (ICF), the program works in Tamil Nadu, Karnataka, and Odisha.  Due to the new formalized employment, women have access to social security promoted by the Tamil Nadu Government and more income for themselves and their families, especially during COVID-19.  The women micro-entrepreneurs from Tamil Nadu have sold products worth more than $900,000 to retailers such as IKEA.

Speaking at the site, U.S. Consul General Judith Ravin said, “It is wonderful to visit and meet with local women today and hear how this project is transforming their lives.  The POWER project is a great example of the strong commitment that the U.S. Government has made to advance women’s economic empowerment in India and I hope to see many more women-owned and operated businesses in Tamil Nadu and throughout India.”

Neelam Chibber, Co-Founder, Industree Crafts Foundation, added, “We are very proud of the work being undertaken here.  The POWER project has helped establish 12 women-owned enterprises, directly impacting 2,400 women and their families, and is aiming to reach a goal of 3,600 by 2022.  The women producers, mostly from marginalized communities, were either laborers or doing small, odd jobs that did not contribute much to their household income before becoming micro-entrepreneurs.  The support received from USAID has helped bring about remarkable transformations.”

On Monday, U.S. Consul General Judith Ravin visited a USAID-supported WASH Institute at the Sanitation Park in Reddiyarchatram, which aims to increase the number of skilled professionals in the Water, Sanitation and Hygiene (WASH) sector.  The Sanitation Park, established in 2018, serves as a training site to expose students, sanitation and health workers, and sanitation technicians on new technologies and practical applications for safe sanitation services.  In India, USAID works to foster healthier urban communities and improve livelihoods by increasing access to safe water and sanitation.