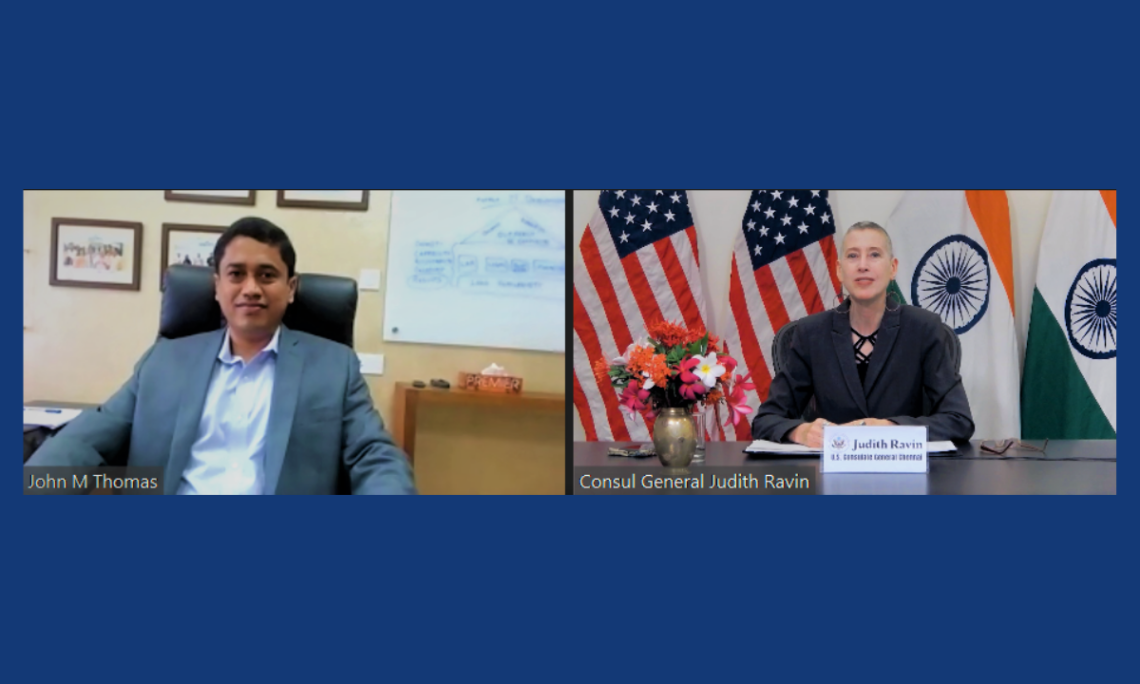 The Consul General said, “Despite challenges to travel posed by COVID-19, it is important that we engage with our friends and partners in Kerala.  My virtual visit to Thiruvananthapuram promoted the United States’ relationship with this important state and addressed key issues of mutual interest.  The day-long virtual visit gave me insight into Kerala’s cultural heritage, socio-economic development, pluralistic ethos, and a strong tradition of tolerance and inclusion.  I am richer today with more ideas for promoting people-to-people and institutional partnerships between Kerala and the United States.”

C.V. Ravindran, Director of the city’s International Airport welcomed Consul General Ravin to Thiruvananthapuram.  A leading economist and a well-known technocrat briefed the Consul General about the Kerala Model of Development and focus on traditional and new sectors including tourism, information technology, space technology, innovation, coastal infrastructure, and service sector.

Chief Executive Officer of Technopark John M. Thomas led Consul General on a virtual tour of the Government of Kerala’s Technopark, the largest information technology park in India.  CG Ravin met representatives from seven major U.S. and Indian IT companies to learn about the current business environment in Kerala.

Following a visit to Technopark, Consul General Ravin met with the alumni and trainers from the Consulate’s English Access Microscholarship Program (Access), conducted in collaboration with the Women’s Muslim Association and the Loyola College Society.  The Access program provides a foundation of English language skills to students between the ages of 13 to 20.  University of Kerala associate professor Dr. C.A. Lal, an Access trainer, and an alumnus of the prestigious U.S. Department of State’s International Visitor Leadership Program (IVLP) moderated the discussion.

Dr. Gopakumaran Nair, Head of the Department of History, Government Arts College, provided the Consul General a presentation detailing prominent historical landmarks of Thiruvananthapuram, their connection with the heritage of the city, and implications for present-day Thiruvananthapuram and Kerala.  Consul General Ravin also interacted with the members of the Travancore Royal Family.