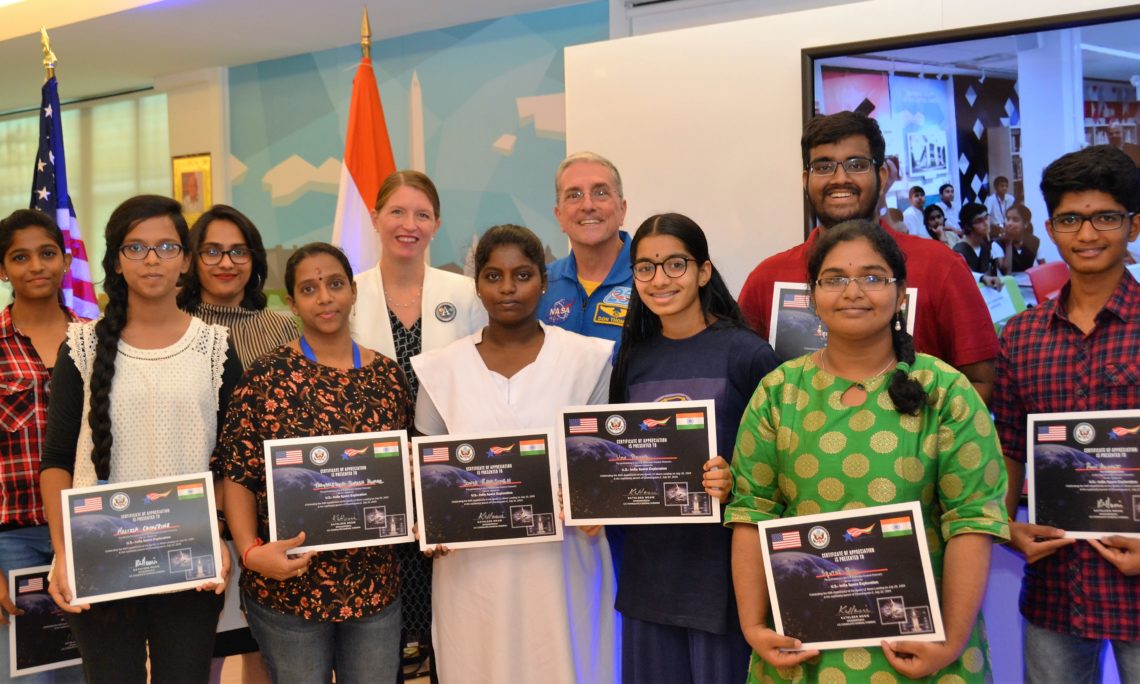 Chennai, August 27:  The U.S. Consulate General in Chennai, in association with EducationUSA and Go4Guru India, hosted a lecture by U.S. Astronaut Don Thomas on his personal journey to fly aboard four U.S. Space Shuttle missions, on Tuesday, August 27, 2019, at the American Center Chennai.  Seventy students from schools and colleges in Chennai and Bengaluru participated.

Commemorating the 50th Anniversary of the Apollo 11 Moon landing, U.S. Consul General Robert Burgess recalled the excitement of watching man’s first steps on the Moon fifty years ago.  He said, “The excitement of space continues today and has grown as more students have become interested and involved in Space.  This summer we saw on July 22 the launch of Chandrayaan-2 from India, which is now in lunar orbit preparing for its mission landing on the South Pole of the Moon.  We are all looking forward to that and wish success to that mission.”

“Work hard, do your best, and never give up on your dreams,” Dr. Don Thomas told students.  Dr. Thomas traced his childhood dreams from watching the Apollo Program to competing four times before being selected in NASA’s 13th group of astronauts in 1990.  He flew four Space Shuttle missions:  STS-65 aboard Columbia in 1994; STS-70 aboard Discovery in 1995; and STS-83 and STS-94 aboard Columbia in 1997.  He spent a total of 44 days in space and orbited the Earth 692 times.  (Visit his personal website:  OhioAstronaut.com)

Dr. Thomas began his presentation saying, “I want to acknowledge the amazing space explorers from India:  Rakesh Sharma, Kalpana Chawla, and Sunita Williams.”  He shared an office with Kalpana for six months, he reflected, “She was in the astronaut class after mine.  She always had a beautiful smile on her face.  She loved talking about flying—she was a great, great astronaut.”

Last month Dr. Thomas spent a few days with Indian American Astronaut Sunita Williams in Wapakoneta, Ohio.  They were commemorating the 50th anniversary of Apollo 11 in the birthplace of Neil Armstrong.  “Sunita Williams flew two times to the International Space Station, where she spent over a year in Space.  Her next mission will be on one of the commercial rockets going up, and I have heard rumors that she may be the first woman on the Moon.  The United States is committed to landing Astronauts on the Moon in 2024, and we are going to send two astronauts—one man, one woman.  Sunita is one of the more senior, experienced astronauts and she has a good shot at being the first woman on the Moon!”

At the conclusion of the event, Dr. Thomas recognized the winners and participants in the U.S. Consulate General Chennai’s July 2019 poster contest on “U.S.-India Space Exploration.”  The Consulate received 66 submissions from across South India, which are on display at the American Center Chennai and viewable online (see Flickr link below).  S Ravi Kumar of ASC College, Bengaluru, took first prize in the 16-and-under category.  Mohammed Rafiq received first prize in the 17-and-over category.

RV Madhuri, a first-year student at National Law School of India University, traveled with her mother from Bengaluru to interact with Dr. Thomas.  Her poster was inspired by the late Indian American astronaut, Kalpana Chawla.  Poster contest participant Srihari Balaji of Chennai, also attended with his mother, and will be studying Astronomy and Mechanical Engineering at Union College in New Jersey in the 2019-2020 academic year.

The event was livestreamed and is available at the below links:

Thank you to all who submitted inspired and artistic renderings of U.S.-India Space Exploration! ***