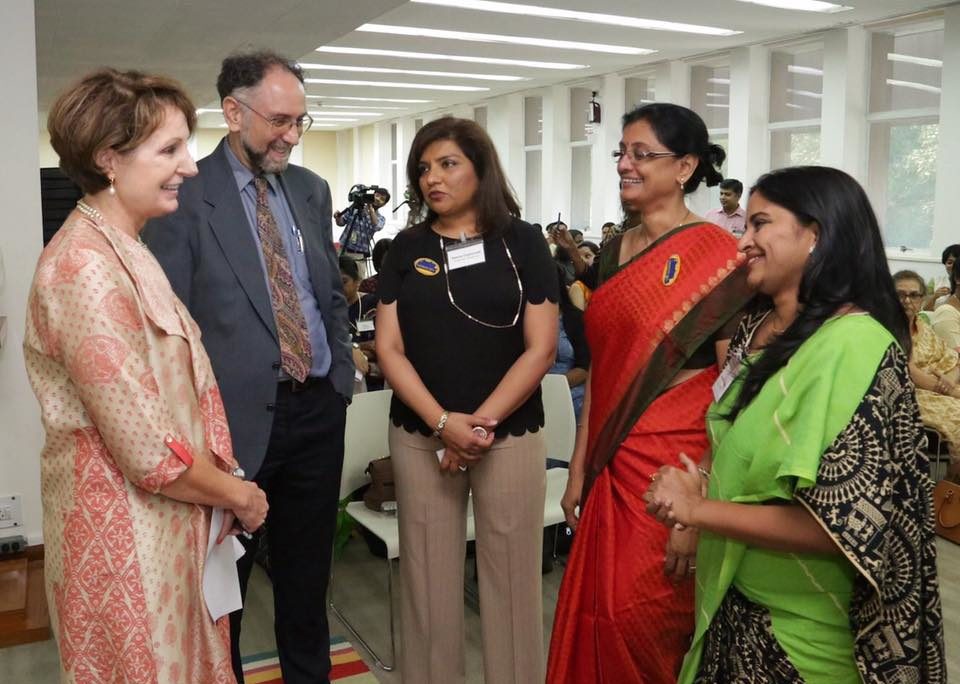 An important Milestone on the Road to the Global Entrepreneurship Summit  (GES) announced by P.M. Modi recently

TiE Global awarded a second year of funding for Scaling Up Women’s Entrepreneurship in India.

In order to uplift women’s entrepreneurial spirit in India, TiE Global has organized a two-day Women Entrepreneurs Conclave in the capital today. The conclave was inaugurated at the American Center to mark the success of a year-long partnership with the U.S. Government to promote entrepreneurship among women from smaller cities in India.

The California-based TiE Global has created significant economic impact by mentoring 125 women from 27 mostly Tier 2 and Tier 3 Indian cities.  A first-of-its-kind program, the All-India Road Show on Women’s Economic Empowerment through Entrepreneurship (AIRSWEEE), was initiated in September 2016 with the objective of educating and inspiring women in smaller Indian cities to consider entrepreneurship as a viable and rewarding career path so as to empower women.

The September 11-12 conclave will host a convocation ceremony for the AIRSWEEE women participants, and a workshop titled “HER POWER: A Women Entrepreneurs Conclave.”

The AIRSWEEE program was funded by the U.S. Department of State, which is committed to promoting entrepreneurship in India.  Towards this goal, the United States and India are co-hosting the 2017 Global Entrepreneurship Summit (GES) in Hyderabad, India, November 28-30.  The theme of the Summit will be “Women First, Prosperity for All,” highlighting the critical role women play in fostering global growth and prosperity.  Ivanka Trump, Advisor to the President, will lead the U.S. delegation.

AIRSWEEE has been a significantly impactful program in catalyzing access to capital for women entrepreneurs. Seema Chaturvedi, Managing Director of Accelerator Group LLC. an investment banking and knowledge services firm with offices in US and India announced Accelerator Group’s commitment to seed the launch of a $25 million early stage private equity fund, Achieving Women Entrepreneurs (AWE) Fund I, specifically for women owned and led enterprises.

In a first for TiE and the U.S. Mission in India, eight leading American entrepreneurs/mentors, along with their Indian counterparts and alumni of U.S. exchange programs, shared best practices, providing practical tools, skills and mentorship opportunities to early stage Indian women entrepreneurs.  The mentors were selected for their proven track records in launching successful businesses and for their passion and dedication to promoting entrepreneurship. The U.S. mentors came from cities across the United States including Santa Clara, CA, Denver, CO, Philadelphia, PA, Miami, FL, Detroit MI, and New York, NY.

Commenting on the success of Project AIRSWEEE, Dr. Craig Dicker, Acting Public Affairs Officer, U.S. Embassy in India noted, “India is a country bursting with potential, particularly among entrepreneurs, but it’s largely untapped, especially with respect to women in Tier II cities.  The U.S. government’s objective through this program is to tap into this amazing potential women in second tier cities have, to encourage them, to support them, to help them network, to mentor them to believe in themselves, not only to launch a start-up but to reach commercial success.  Our objective is to empower women in second tier cities through entrepreneurship, so that they can become leaders. Based on the significant impact created by Project AIRSWEEE we are delighted to annouce the award of a second round of funding to TiE Global to amplify the outreach of AIRSWEEE to additional cities in India.”

Speaking of the impact and the second grant, Ms. Seema Chaturvedi, Chairperson, Project AIRSWEEE noted, “The program has created a multi-dimensional impact. Economic empowerment of a woman creates a ripple effect, which not only catalyzes gender equality and resulting positive social reforms but can also truly have a multi-generational impact. We are very appreciative of USG’s recognition of the impact Project AIRSWEEE created and seek to create a bigger impact in the second year by setting a target of impacting 450 women entrepreneurs in India.”

TiE Global, is a not for profit organization dedicated to fostering entrepreneurship around the World. TiE strives to inspire entrepreneurs through mentoring, networking, education, incubating and funding programs and activities.  With nearly 2000+ events held each year, TiE brings together the entrepreneurial community to learn from local leaders, as well as each other.  For more information, please visit our website at tie.org