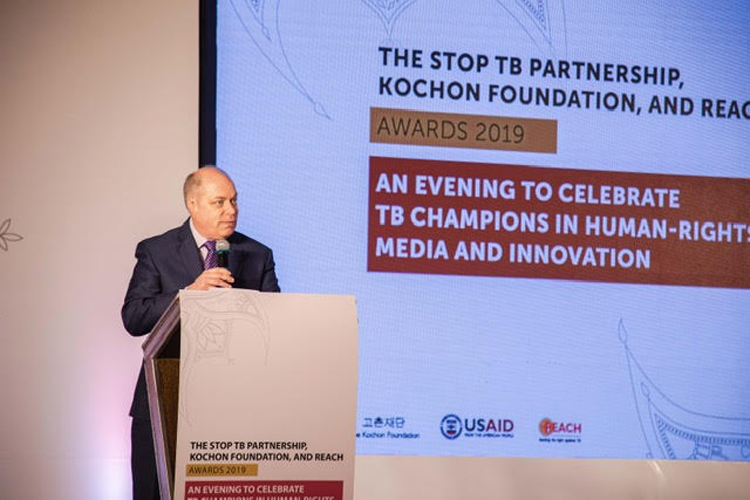 Hyderabad, October 31: At an event on the sidelines of the 50th Union World Conference on Lung Health in Hyderabad today, the United States Agency for International Development (USAID), the Resource Group for Education and Advocacy for Community Health (REACH) and the Stop TB Partnership honored corporations and journalists who have made significant contributions to eliminating tuberculosis (TB) in India.

The event opened with the presentation of Certificates of Appreciation to Brihanmumbai Electricity Supply and Transport, Becton Dickinson and Company, Gas Authority of India Limited, and Medanta, companies that have demonstrated exemplary leadership in India’s fight against TB.  All four have signed on to a United States supported “Corporate TB Pledge” that encourages companies to devote their resources to combatting TB, raising awareness of TB as a curable disease, and ultimately improving TB health outcomes.

Speaking at the event, the United States Consul General in Hyderabad, Mr. Joel Reifman, articulated the important role Indian companies can play in assuring a healthy, TB free India.  “Across India, companies are finding innovative solutions that are helping their workforces and the communities in which they work to raise awareness about this deadly but treatable disease; fight TB stigma; encourage people to get tested; support those who test positive; and encourage them to stay on treatment.”

The event saw four journalists recognized for outstanding and responsible reporting on TB. The REACH Media Awards, given annually since 2010, highlight the vital role the media plays in informing the public and decision-makers about TB prevention and care.  Speaking at the event, USAID Mission Director Keith Simmons noted, “Accurate, sensitive, effective and timely journalism can improve public understanding of TB, increase access to TB services, and dispel the many myths and misconceptions that persist about the disease.”

In the English language category, awards were presented to Menaka Rao, a Delhi-based independent journalist, for her series on Kerala’s TB response in IndiaSpend, as well as to Maitri Porecha of The Hindu Businessline, for her story on the rollout of new drugs for people affected by TB.

Commenting on the event, Dr. Ramya Ananthakrishnan, Executive Director, REACH said, “One of the biggest challenges we face in India is ensuring that people know about TB, its symptoms, where to seek care and that it is a curable disease. High-quality reporting by trained journalists can bridge this information gap, address the stigma associated with TB and save lives”.