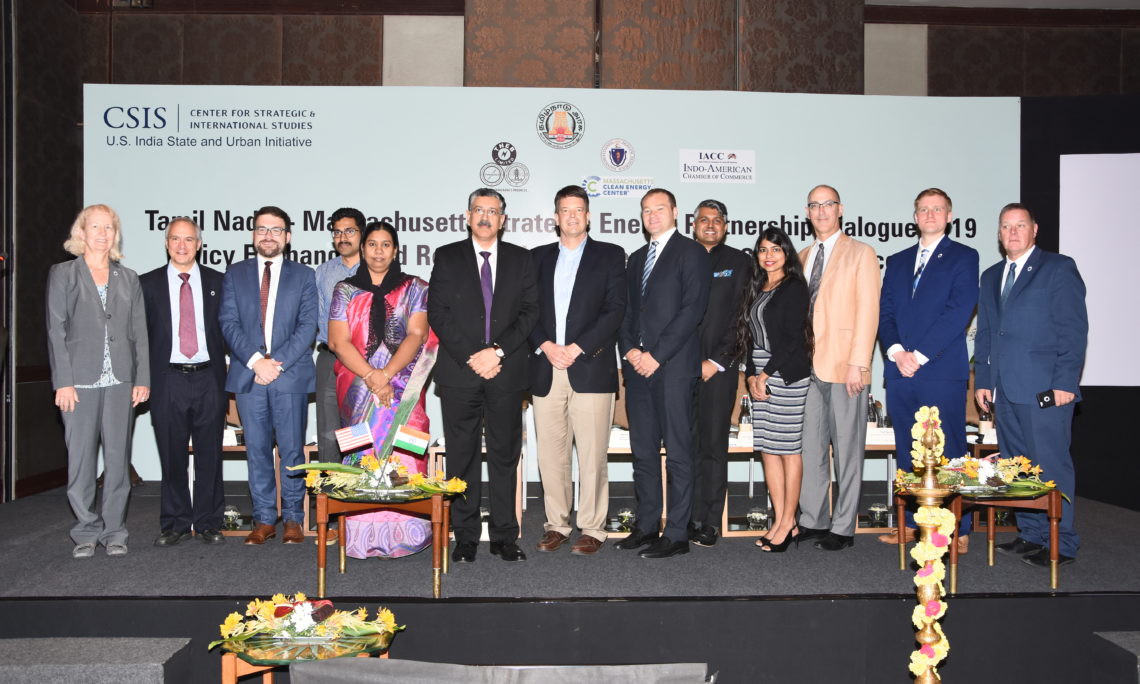 Chennai, Oct 25:  Energy experts from the U.S. State of Massachusetts and the Government of Tamil Nadu conducted a formal Massachusetts-Tamil Nadu Energy Partnership Dialogue in Chennai on October 23.  The Washington D.C.-based Center for Strategic and International Studies (CSIS) organized the Dialogue as part of the U.S.-India State and Urban Initiative.

Led by the Massachusetts Executive Office of Energy and Environmental Affairs, a nine-member delegation from Massachusetts, the city of Boston, and private sector and research institutions traveled to Tamil Nadu for the dialogue and a series of site visits and discussions between October 21 and October 25.

The discussions helped deepen U.S.-India energy cooperation by linking the energy sectors of Massachusetts and Tamil Nadu.  Participants exchanged strategies for managing energy resources and integration of renewable resources.  The visit laid the groundwork to identify specific linkages between research institutions, the private sector, and the energy agencies of the two states.

Vikram Kapur, IAS, Additional Chief Secretary/Chairman and Managing Director of TANGEDCO, said, “I hope that the present dialogue would facilitate better understanding between the two states in the areas of energy policy, education/research as well as trade and investments.”

Patrick Woodcock, Undersecretary of Energy, Commonwealth of Massachusetts, said, “Massachusetts is pleased to work with India and Tamil Nadu in collaborating on the policies, technologies, and partnerships that will lead to cost-effective greenhouse gas mitigation.”

Tamil Nadu has been working closely with the Massachusetts Clean Energy Center and the University of Massachusetts at Amherst to further the priorities of India’s National Institute of Wind Energy in establishing a blade testing facility and enhancing wind technology education and research opportunities.  Similarly, the city of Boston has liaised with the Chennai Municipal Corporation’s climate change division to support a broader state-to-state agenda.

Supported by the U.S. Department of State and several philanthropies, the U.S.-India State and Urban Initiative has facilitated 15 partnerships during the past three years between U.S. energy stakeholders and Indian state governments, including the states of Gujarat, Maharashtra, Madhya Pradesh, Rajasthan, Telangana, and now Tamil Nadu.