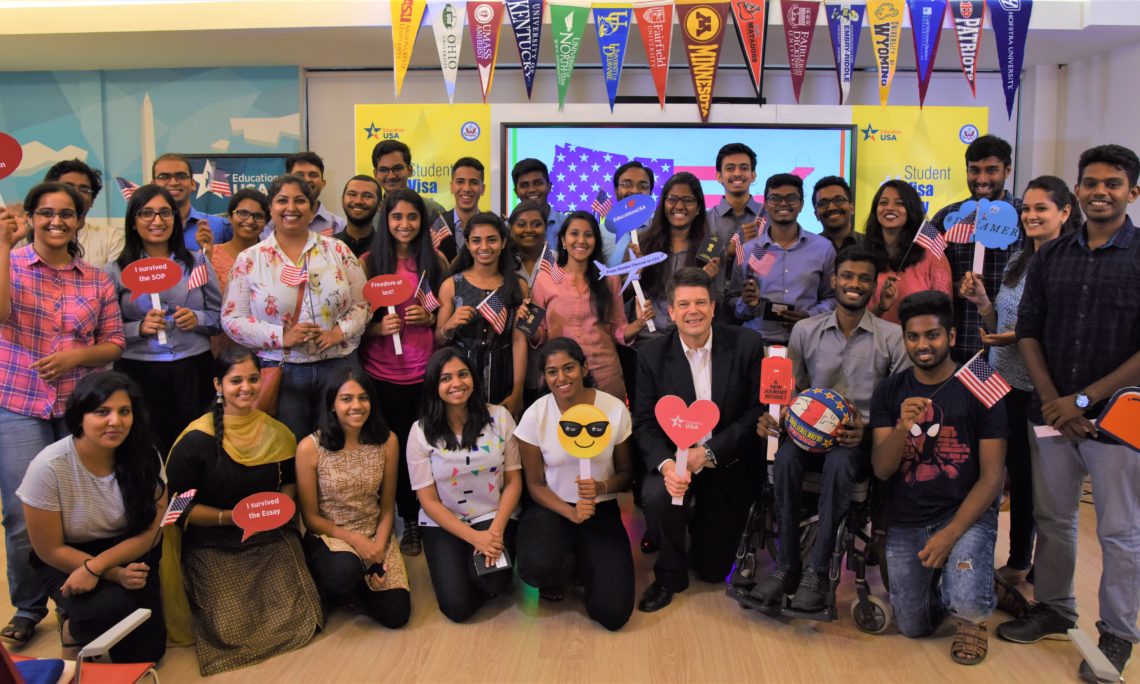 Consul General Robert Burgess seen with the students, who received their visas to pursue higher education in the United States, at a function held at the American Center in Chennai on Wednesday (June 12).

Chennai, June 12:  On June 12, the U.S. Consulate General in Chennai joined the rest of U.S. Mission India to mark the fifth annual Student Visa Day.  This yearly event celebrates higher education ties between the United States and India and helps qualified Indian students prepare for study in the United States by connecting them with EducationUSA for pre-departure information.

“I congratulate the students and parents who have taken this life-changing step to pursue higher education in the United States.  I warmly welcome you to the campuses of our 4,700 accredited academic institutions, whose communities are enriched by diverse student bodies, and whose many and varied educational programs offer academic rigor, fulfilling experiences, and lifelong friendships,” said Consul General Burgess.

In conjunction with the celebration of Student Visa Day across India, the U.S. Embassy and United States-India Educational Foundation (USIEF) launched the EducationUSA India mobile application on both iOS and Android platforms to provide Indian students current, comprehensive, and accurate information on studying in the United States.  EducationUSA is a U.S. government program and is the official source of information on U.S. higher education. Please visit www.educationusa.state.gov for more information.

This free app is the first point of information for students, parents, school counselors, and others who want to know about U.S. higher education but don’t know where to begin.  The app, which is easy to download, links to other EducationUSA resources.

Here are the download links for Android and iOS –

Photo Caption:  Consul General Robert Burgess seen with the students, who received their visas to pursue higher education in the United States, at a function held at the American Center in Chennai on Wednesday (June 12).