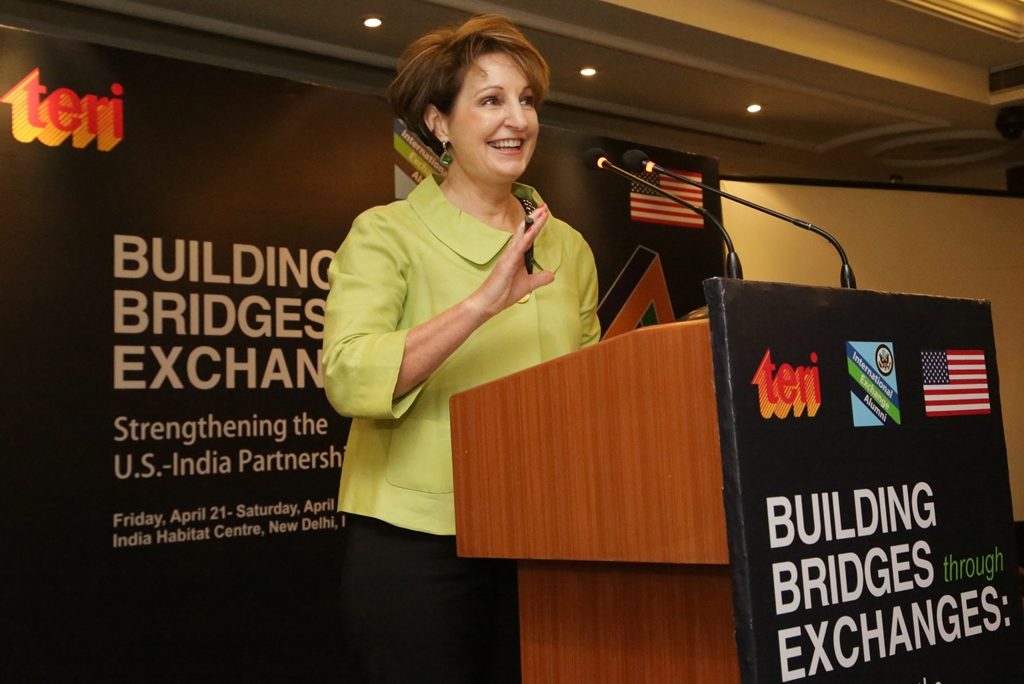 Good morning exchange alumni!  I am honored to be here today for the first U.S. government exchange alumni conference for India and Bhutan.  A special thanks to the event organizers – TERI who have been working on this event for almost a year.  I also want to recognize the Alumni Steering Committee, which has provided feedback and guidance throughout the process.  I hope this two-day conference leads to closer alumni ties, a stronger national and regional network, and continued personal and professional development.

People-to-people ties among our three countries are strong and growing stronger: from Swami Vivekananda’s influential visits to the United States in the late 19th century to Mahatma Gandhi’s lasting impact on the civil rights movement to the over three million Indian Americans in the United States today.  Indian Americans are currently serving at the highest levels of U.S. government including in President Trump’s Cabinet – the U.S. Ambassador to the United Nations Nikki Haley – the U.S. Senate and House of Representatives, and the U.S. Court of Appeals.

Each year almost 500 people from India and Bhutan participate in more than three dozen exchange programs funded by the U.S. government of various lengths from one week to two years.

Some of the closest and strongest people-to-people ties are those forged through study abroad or through an exchange experience.

I personally know about the power of intercultural exchanges and the life-long bonds that they form.

Since 1950 when the first cultural exchange between the United States and India began, approximately 16,000 Indians have visited the United States on an educational, cultural, or professional exchange program.  Over 200 Bhutanese citizens have participated in U.S. government-sponsored exchange programs since 1971 when the first Fulbright Fellowship was awarded to a Bhutanese student.  From students of underserved communities to the who’s who of politics, business, media, and the arts, the Mission’s alumni represent the best of India and Bhutan’s regional, linguistic, religious, and socio-economic diversity.

Exchange alumni such as you hold a unique position in these long-standing and outward-looking relationships.  By placing yourselves outside of your comfort zones, pushing your boundaries, and connecting with others, you are part of a global community of exchange alumni promoting mutual respect and cooperation.

It is exciting to see how our exchange and alumni programs are creating global communities of change makers, especially in the fields of entrepreneurship, environment, civil society, and higher education.  Each of you is doing some amazing work – at different stages of your careers – and I wanted to highlight several examples.

There are a number of alumni who are spearheading innovative efforts to build an entrepreneurial ecosystem, who are not afraid to take risks with their ideas, and who mentor others through the challenges of starting out on one’s own.

For instance, a former journalist and International Visitor Leadership Program – or IVLP as many of you know it – alumnus from Chennai, Peer Mohammed, has received funding to expand the pilot project he began in 2015 to take technology and journalism to underserved communities through his bilingual app, “Ippodhu” meaning “now” in Tamil.  This was funded through the Alumni Engagement Innovation Fund, which you will hear more about today and tomorrow.

Another Alumni Engagement Innovation Fund project is helping young individuals develop their vocational and entrepreneurial skills and helping communities become more energy efficient.  Teaching Excellence and Achievement program alumnus, Mr. Rajesh Majumdar and his team in Uttarakhand have teamed up with the NGO Society of Pollution and Environment Conservation Scientists (SPECS) on their project “Lighting Up Lives.”  This project brings together rural youth from across the country to train them on how to build and repair LED lightbulbs.

I would be remiss if I did not mention the work of TERI, our hosts for the conference, which includes IVLP alumni such as Shresth Tayal and Mini Govindan , who are paving the way to find sustainable and inclusive solutions to environmental effects on glaciers and cities.

Another conference theme is civil society.  Illustrious alumni such as Ela Bhatt, founder of SEWA and leader of the self-help movement in India, continue to champion the cause of gender and economic empowerment in the region and across the world.  Another IVLP alumna, Mamta Borgoyari, Delhi-based CEO of FXB India Suraksha, works in nine states to uphold the rights of children and vulnerable people affected by poverty and disease, especially those affected by HIV/AIDS. From Mumbai, Harish Iyer is the only Indian national listed in the World Pride Power List, a list of 100 most influential LGBT people in the world.

Turning to education, educational cooperation is a key component to the relationships between the United States and India and Bhutan.  Alumni based at educational institutions such as Panjab University, the University of Calcutta, the Indian School of Business, and the Royal Thimphu College in Bhutan, many of them present here today, are increasing student and faculty exchanges and forging closer institutional partnerships with U.S. higher education institutions.

As we speak, there are two International Visitor Leadership Program groups in the United States – Salt Lake City to be more precise – focused on higher education – one from India and another from Bhutan.  They are right now attending a conference on graduate admissions as part of their three-week, multi-city exchange program.  We look forward to their return and their engagement with the higher education sectors in India and Bhutan and their future partnerships with universities in the United States.

Last year, the U.S. Embassy supported a pan-India alumni mentoring program that paired over 150 youth alumni with over 60 more senior alumni mentors.  I believe that this conference – bringing together 150 people from across sectors, regions, and ages – will create additional mentoring and professional relationships.

I encourage you to use these two days together to develop this shared alumni identity.  What is the shape that you’d like to give to the alumni network in India and Bhutan so that the community can be strengthened?  How can the U.S. Embassy further support you in your endeavors?  I look forward to learning about the outcomes of your discussions regarding next steps for our alumni community.

The Indian and Bhutanese exchange alumni community includes two former Presidents and five Prime Ministers, including the current Indian Prime Minister Narendra Modi, and countless CEOs, entrepreneurs, artists, academics, and media persons at the forefront of their fields.  You are an inspiring group of people and I am impressed by your contributions in your fields.

Thank you for allowing me to share some remarks and observations with you on the power of exchanges.  I look forward to interacting with you later this evening during the cultural performance and dinner.