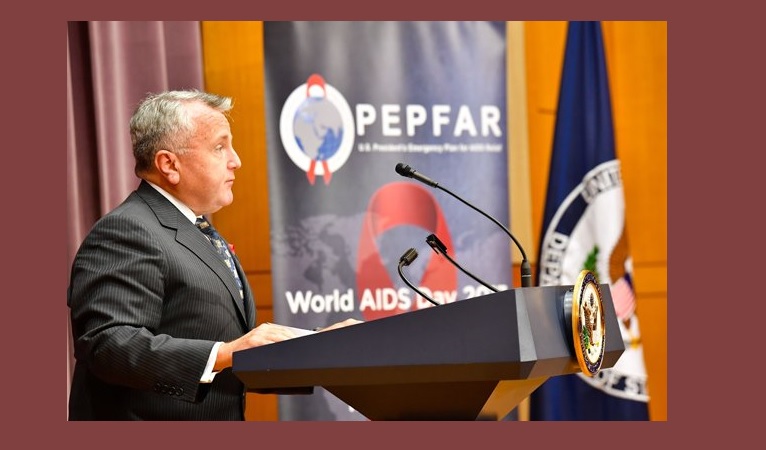 DEPUTY SECRETARY SULLIVAN: Thank you, Ambassador Birx. You and your team at the department, and the efforts you lead throughout the interagency, are why we are able to stand here today and reflect upon so many positive stories. Thank you for all you’ve done, you and your team. We’re grateful for your leadership and for your commitment to ridding the world of HIV/AIDS.

And let me thank also the many people who have made this event possible: leaders from the United States Government, from Congress, members of the Diplomatic Corps, the private sector, the faith-based community, and civil society.

This group represents an entire community of people who are helping us to better understand the epidemic, and to develop a course of action for how we can further accelerate our fight against it.

So it’s my honor to be here today as we recognize World AIDS Day – honoring those who lost their lives to AIDS, celebrating the progress we have made, and looking forward to other areas where we can work together toward our goal of ridding the world of this disease.

Today’s program highlights the United States response to AIDS and the success we have seen throughout the world, which is in large part due to the program’s commitment to transparency, accountability, and fostering partnerships, and, of course, ultimately due to the tremendous compassion and generosity of the American people.

I happened to travel to Nigeria last week, and one thing that I prioritized during my trip was to see firsthand the vital work of the President’s Emergency Plan for AIDS Relief, as we know it as PEPFAR. I visited the Asokoro Hospital in Abuja, where I met mentoring – “mentor-mothers,” mothers who’ve lived with AIDS who are empowered to help improve the lives of others. These women, and so many like them across the globe, are doing what they need to do to help themselves and their children – and by doing so, also assist their country.

It was really a remarkable thing to go into that facility I was just describing to you, Ambassador Birx, to see those women and their children, to be with them in that facility, to see those lives that have been changed by policies that were adopted – I previously served in government in the Bush 43 administration; I was actually at the Department of Commerce as deputy secretary – to see what the U.S. Government was able to accomplish, the lives that have changed, the lives that – the women and men, children, who are alive today because of decisions that were made here in Washington and implemented so ably by leaders like Ambassador Birx.

Also because of the partnerships that we’ve developed with governments like the government in Nigeria – our relationship with the Nigerian Government working through State, CDC, DOD’s Walter Reed programming, and USAID – all have worked together to build institutional and country capacity to achieve epidemic control.

Today we’re fortunate to have one of PEPFAR’s young DREAMS Ambassadors join us from South Africa. Nontokozo, your work to support and empower your peers to protect themselves from HIV is an inspiration. It’s also a reminder that, at its heart, this battle is being won by courageous efforts of thousands of committed individuals like you and like the “mentor-mothers” I met in Nigeria. Thank you for the incredible example you have set for all of us here today.

Since its inception in 2003, PEPFAR has transformed the global HIV/AIDS response and saved millions of lives. Today, we continue to build on this legacy, and remain committed to controlling the epidemic by using a data-driven approach that focuses on the highest-burden countries, geographies, and populations. And as many of you know, we have come quite a long way.

When President George W. Bush started PEPFAR almost 15 years ago today, only 50,000 people in Africa were receiving treatment through the program. To be diagnosed with HIV/AIDS was a death sentence.

As we continue to look for more ways to support the communities hardest hit by this disease, PEPFAR continues to expand its prevention efforts.

To ensure babies are born HIV free, PEPFAR’s direct assistance supports more than 2.2 million babies that have been born HIV-free to HIV-positive mothers.

To protect men and boys, PEPFAR has supported more than 15 million men and boys through preventative methods to reduce the risk of HIV transmission.

To ensure children thrive and are protected from HIV, PEPFAR is supporting more than 6.4 million orphans, vulnerable children, and their caregivers to help them mitigate the tremendous physical, emotional, and economic impact of HIV/AIDS.

With the critical progress we have made on HIV cure research and vaccine development, we are one step closer to ending the HIV/AIDS pandemic as a public health threat – allowing communities, scientists, and political leaders to envision a very different future.

The success of this program has become a reality because of the support from our partners in civil society, across many governments, and through significant private sector assistance. These partnerships are essential to building the capacity to achieve epidemic control.

I want to thank all of those partners and a special thanks to those of you who are with us here today.

PEPFAR continues to work tirelessly to save every life. We are still pioneering methods to fight this disease and bring hope to even more people. And we are closer than ever before to ending this pandemic.

Last September, at the UN General Assembly, Secretary Tillerson announced PEPFAR’s new Strategy for Accelerating HIV/AIDS Epidemic Control. We believe it is possible to control this pandemic. And in partnership with countries that share our vision, we are creating the roadmap to control.

Through this strategy, PEPFAR will invest its resources to continue decreasing the number of new HIV infections using data-driven programming to focus on the highest-burden populations and locations.

Our data is better and more nuanced than ever before, allowing us to measure progress and concentrate our efforts based on sex, age, and geography. We are committed to taking full advantage of this data, using it to improve our programming and to hold ourselves and our partners accountable for its results.

This strategy reaffirms the U.S. Government’s leadership and commitment through PEPFAR to support continued progress on the HIV/AIDS epidemic control in more than 50 countries, and ensure access to services by all populations, including the most vulnerable and at-risk groups.

We’re pursuing this strategy with several concrete goals in mind.

First, we seek to maintain lifesaving treatment for those we support. One way we can better serve populations struggling with the disease is to make essential services, like testing and treatment, more accessible for everyone. In target countries, PEPFAR will expand both HIV prevention and treatment by increasing performance, delivering care more efficiently, and sharing the responsibility among more partners.

Second, we aim to expand HIV health services for orphans and vulnerable children – those who are permanently affected when a parent or caregiver is lost to this disease. We will work hard to provide more avenues and better support for this critical group of young people.

Third, we will accelerate implementation in the 13 high-burden countries that have the greatest potential to achieve epidemic control by 2020. This is a significant goal, and one we can only achieve by working closely with many partners. By collaborating with host governments; with the Global Fund to Fight AIDS, Tuberculosis and Malaria; with UNAIDS; and with other partners, we expect not only to control the epidemic, but to reduce future costs needed to sustain the HIV/AIDS response. After all, our end goal is a world where we don’t need resources to fight HIV/AIDS because it no longer poses a threat to global health.

And we are already seeing results.

New PEPFAR data shows that five of these 13 high-burden countries are already approaching control of their HIV/AIDS epidemics – a feat that once seemed impossible not that long ago.

As we consider PEPFAR’s future, we continue to illustrate our whole-of-government approach; coupled with high accountability measures and a mutual respect of our partners, we can and will change the future for the better.

So on this eve of World AIDS Day 2017, we are at an unprecedented moment. For the first time in modern history, we actually have the opportunity to control a pandemic without a vaccine or a cure, laying the groundwork for the eventual elimination or eradication of HIV with the help of scientific breakthroughs.

The U.S. Government, under the leadership of President Trump, continues to lead the way in the global HIV/AIDS response. I know there are many here who are engaged in these challenges; indeed, for many of you, it is your life’s work or calling. Please know that we are with you. You have the support of the U.S. Government as we collaborate with partner governments, the private sector, faith-based and civil society organizations, and the networks of people living with HIV to control this pandemic once and for all.

With continued commitment, dedication, and hard work, we will deliver on that goal and end this epidemic in a sustainable manner. Thank you all for your steadfast devotion in sharing this burden, and for sharing our vision of a world free from HIV/AIDS.

The exhibit unveiled today in the U.S. Diplomacy Center helps to tell this story – one of hope that we are all writing about our work to bring courage to millions around the world by continuing to lead and accelerate our fight against this disease. I hope you’re all able to take some time to view the timeline, the data, and the stories, and really consider the displays at the reception.

So on behalf of Secretary Tillerson, thank you again for being here today, and for all that you are doing to help us end HIV/AIDS for good. Thank you. (Applause.)

Deputy Secretary John Sullivan: Since its inception in 2003, @PEPFAR has transformed the global HIV/AIDS response and saved millions of lives…Through @PEPFAR, the US Government supports more than 13 million people with life-saving antiretroviral treatments. #WorldAIDSDay pic.twitter.com/1pg1szTYF3