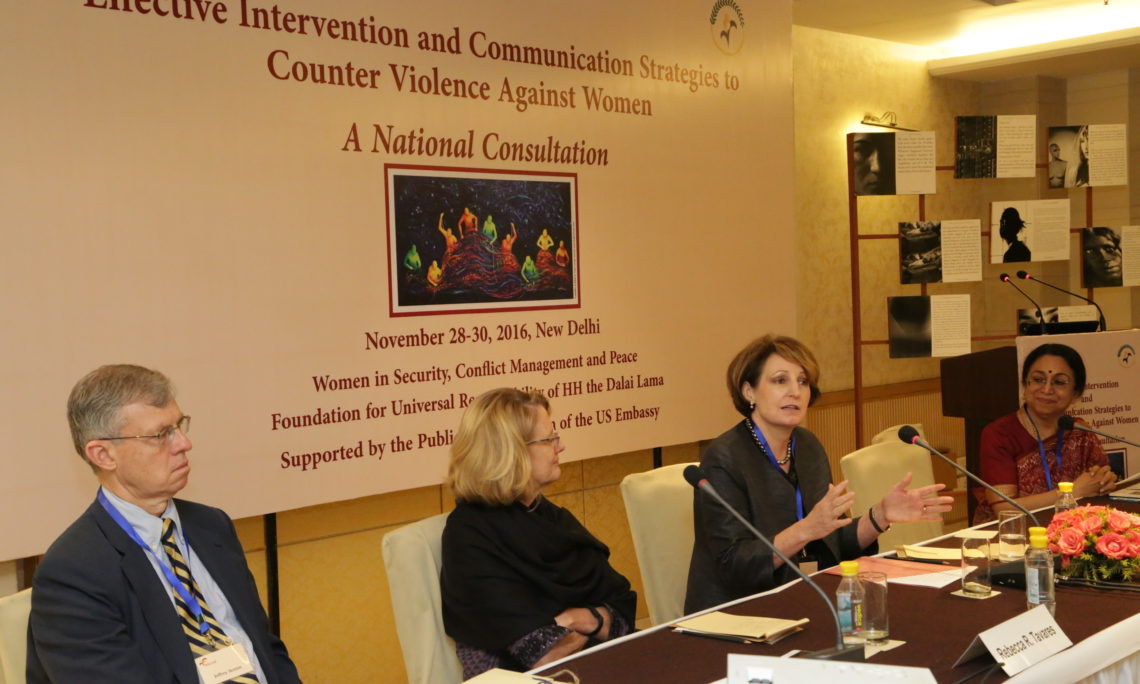 Meenakshi, Rebecca, and guests, I am honored to join you to support the “16 Days of Activism against Gender-Based Violence Campaign.” Violence against women is a global, human rights issue that needs tremendous will, effort, resources and partnerships between all stakeholders – governments, civil society, media, youth, intellectuals and citizens at large – to ensure greater safety and dignity for women and girls.

We are here to kick off the first day of this annual 16-day international campaign, which starts each November with the International Day for the Elimination of Violence against Women, and continues until Human Rights Day in December. As many of you may know, the campaign originated from the first Women’s Global Leadership Institute sponsored by the Center for Women’s Global Leadership in 1991. Since then, it has grown in stature to become the global movement it is today. The campaign encourages us to engage in urgent reflection, awareness, attention, and action to make women and girls around the globe safe from all forms of abuse – physical, sexual, and emotional. All of us, men and women, girls and boys, have a role to play by supporting gender equality in our personal and professional capacities – not just for these 16 days – but 24/7, 365 days of the year, every day of our lives.

Promoting gender equality and empowering women and girls is a priority for the Governments of the United States and India. President Obama has said, “Communities that give their daughters the same opportunities as their sons …are more peaceful, they are more prosperous, they develop faster, they are more likely to succeed.” I could not agree more.

I am the eldest of four children – two girls and two boys – born to school teachers in the state of Arkansas. Growing up, I was fortunate that my parents treated us all equally. They encouraged all of us to study hard , and they scrimped and saved to make sure that each of us had the opportunity to attend college. It was inconceivable that my parents would treat my brothers any differently than they treated my sister and me. As a result, all four of us went to college and then on to graduate school and have enjoyed good careers, empowered by loving parents who did not discriminate among us based on gender.

Sadly, not all girls growing up are given the same chances as their brothers. And that is why I so strongly support the efforts of the American Embassy in New Delhi, the four consulates in Mumbai, Chennai, Kolkata, and Hyderabad and USAID to promote the rights of women and girls and to prevent and counter gender-based violence. We work with partners such as Women in Security, Conflict Management and Peace (WISCOMP), drawing on your expertise and experience of working with other local partners – youth, activists, media, intellectuals, academia, business, and many others to create greater awareness and facilitate attitudinal and behavioral change in society, especially among young people.

I am particularly proud of the partnership between the U.S. Embassy Public Affairs Section and WISCOMP for the “Youth Countering Violence against Women in India,” program. This program focuses on youth taking leadership roles to counter violence against women by focusing on attitudes, beliefs, and behavior change. Together, we are developing a generation that does not accept violence against women as the norm. A generation that is committed to creating a more just and equitable world for both women and men. I can think of few more compelling goals.

In addition to our partnership with WISCOMP, the Embassy works throughout the year to keep the spotlight on empowering women through dialogue, discussion and action. I would like to take a moment to highlight a few Embassy initiatives:

The U.S. Embassy understands that Gender-Based Violence, and women’s issues in general, cannot simply be engaged from the top down, but must also be addressed through grassroots and community-based solutions. That is why our North India office has partnered with Bal Raksha Bharat (Save the Children) to create a GBV caravan that will engage communities to promote awareness and prevention. Our North India Office will work closely with the Bal Raksha Bharat offices on the state level – in Rajasthan, Haryana, Punjab, and UP – to tailor the caravan activities on a district-by-district basis for maximum results.

Some of our Consular posts like Kolkata have taken the lead in organizing innovative programs like the Hackathon to Combat Gender-Based Violence in Ranchi, Jharkhand, in partnership with U.S.-based non-profit “Geeks without Bounds” and Bangalore non-profit “Bachao Project.” They also have an upcoming story-telling project, “Breaking the Silence: One Story at a Time,” that will bring artists and activists from the United States and India to collaborate using theater, dance, traditional arts, ‎and digital space to give voice to the survivors of gender-based violence.

You may know that USAID is building high-impact partnerships and leveraging local resources to promote and ensure equitable access to quality healthcare, sanitation, education, nutrition, finance, household decision making and asset ownership for women in India. Their programs are built with the goal of finding creative solutions to resolve the barriers faced by women and girls.

And that is just here in India. Back home in Washington, DC, the State Department sponsors several annual exchange programs that bring key Indian stakeholders working on different aspects of GBV for short orientation programs to the United States to share best practices in addressing this global challenge. Last year, 29 nominees participated in seven exchange programs on GBV-related issues from all over India. This year, we hope six Indian leaders in this field will travel to the United States on three GBV-related programs.

One of the great things about these exchange programs is that alumni use the knowledge they gain to enhance their efforts when they return to India. They continue to make rich contributions to the dialogue and often are enabled to take more effective action to create a society free from gender-based violence.

For example, Meenakshi and Manjrika Sewak from WISCOMP , both alumni of U.S. Government-sponsored exchange programs, are innovatively leading civil society efforts to curb gender-based violence around the country. The Department of State Trafficking in Person’s (TIP) hero from Hyderabad, Dr. Sunitha Krishnan, received the Padma Shri, India’s fourth-highest civilian honor in January 2016 for her contribution to anti-trafficking issues; similarly, there are scores of other alumni of U.S. exchange programs who are working to empower sex-workers in Delhi’s red-light district, or supporting and empowering indigenous widows in the conflict-ridden north-eastern state of Manipur. They do this by not only through skill development, but also by enabling these women to become well-rounded leaders who can lead their own enterprises.

Finally, I am pleased to share that from December 5 to 7, over 50 American Embassy personnel from across the country will join some of our Indian partners to participate in a three-day training program to learn new strategies for how to integrate Gender into their portfolios. This three-day workshop is our internal commitment to making gender a priority in our work.

As you can see, the United States Government and the U.S. Mission to India are committed to working with partners such WISCOMP and others in this room to provide greater dignity to women and girls so that they can realize their potential as equal partners in progress and development. I am confident that through consultations like this and continued dialogue, we are building a world where our children are provided equal opportunities regardless of their gender. Thank you.