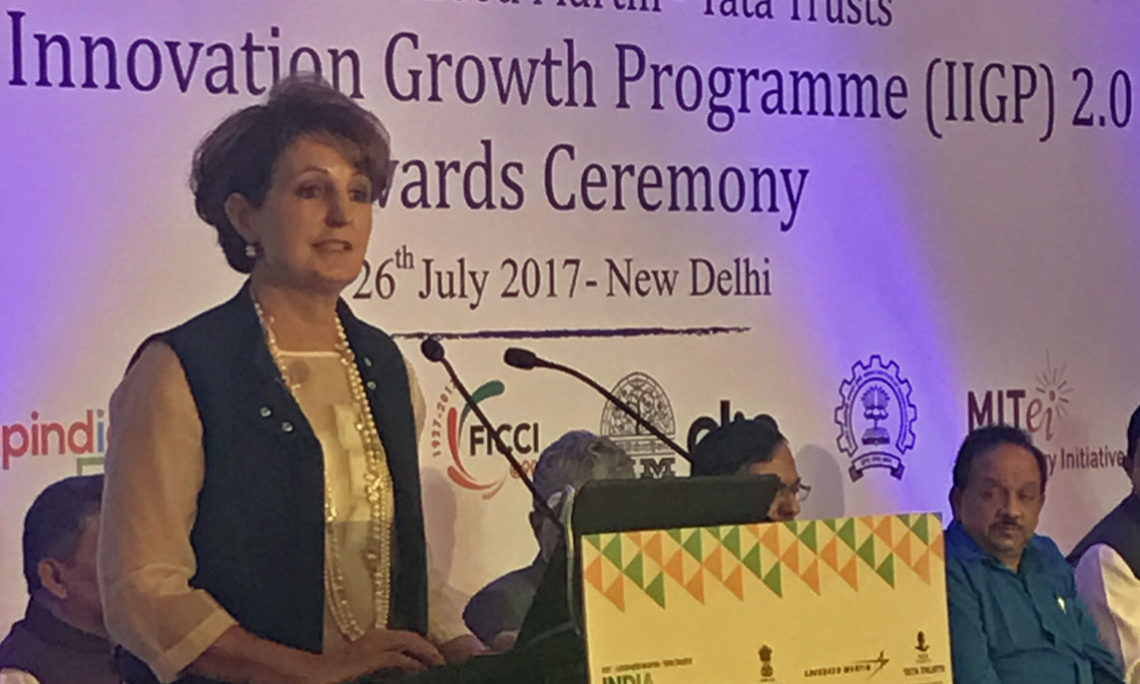 Good afternoon.  Thank you all for the warm welcome and the invitation to join this wonderful event.  I’m grateful to be able to speak to you today alongside Minister Vardhan and other senior government officials.

I particularly want to thank Lockheed Martin and Tata, both of whom are partnering to promote innovation and entrepreneurship globally.  Your two companies exemplify the great things that can happen when our two countries — with their dynamic corporations and innovative entrepreneurs — collaborate.  Lockheed has a long tradition in India.  Among many endeavors, it is doing outstanding work at its factory in Hyderabad, where workers assemble sections of C-130 military cargo planes.  At that factory, Indian workers handcraft tail sections and affix them to parts of the fuselage – all to exacting specifications.  These large aircraft sections are then shipped back to Georgia in the United States, where they are transformed into a finished plane – an example of a truly global supply chain.

Lockheed and Tata exemplify the best of our countries’ traditions.  They are working together in philanthropy and business – combining efforts to improve not only their companies’ bottom lines, but the security, welfare, and economic prospects of both countries.  I’d like to share some examples of the U.S.-India partnership before letting you in on a NEW U.S.-India initiative coming up this fall.

IIGP as an Example of U.S.-India Partnership

The Indian Innovation Growth Program (IIGP) is an example of the great work our countries are doing together.  It shows the collaboration of

There are other organizations here today working to further the U.S.-India partnership, including the Federation of Indian Chambers of Commerce and Industry (FICCI), and The Indus Entrepreneurs (TiE).  I know many of the other speakers here will have a lot to say about their great work in supporting more than 400 technology innovators and their startups that generate over $900 million globally.

A prime example of how our partnership is benefiting the world is the U.S.-India Science and Technology Endowment Fund.  Many of you here are familiar with the endowment, but I’d like to highlight some of its successes.  Since its establishment in 2009, it has awarded over 20 grants, up to about 400 thousand dollars each, to help commercialize innovative technologies for social impact.  These grants, which are jointly developed by partners from the United States and India, have boosted innovations in medical devices, water treatment, agriculture, and other fields.  One solution created an inexpensive device for above-the-knee amputees, helping patients walk again.  These are just a few examples of innovations that have had positive effects far beyond the borders of our two countries.

In India I’ve learned the word “jugaad,” which doesn’t seem to have an exact translation into English, but essentially means Indians know how to find creative solutions to their problems.  In the United States, we too have a long history of innovation and entrepreneurship.  That tradition is vital to our country’s development and prosperity.

At the U.S. Embassy and in our four consulates in India, we promote this entrepreneurial spirit through exchanges and American Center programs.  This year we launched a start-up hub in our American Center in New Delhi called Nexus.  With the University of Texas’s prestigious IC² Institute, Nexus helps develop entrepreneurs and connect them to investors, supporting U.S. and Indian jobs. I was excited to attend the graduation of our first class last Friday, and wish these new entrepreneurs well.

The United States Agency for International Development, or USAID for short, partners with the Indian Department of Science and Technology and FICCI on the Millennium Alliance.  This partnership identifies, tests, and scales innovations.

I’d like to highlight one new partnership on entrepreneurship between our governments – the one I hinted at in my opening.

When Prime Minister Modi visited Washington in June, he and President Trump announced our countries would jointly host the next Global Entrepreneurship Summit this fall.  This Summit, which the United States has been hosting or co-hosting for seven years, will pull together entrepreneurs, venture capitalists, academics, and government officials from around the world to promote new ideas.  This is the first time the Summit will be held in South Asia, and it will be led on the U.S. side by Ivanka Trump.  The 2017 summit will focus on women’s entrepreneurship as a means to achieving global prosperity.

Just as IIGP links startups to U.S. and global investor markets, the Global Entrepreneurship Summit will provide a platform for entrepreneurs to meet some of world’s top investors.

I’d like to wrap up by congratulating the recipients of tonight’s awards.  You’re already doing great work to bring Indian technologies to the global market.  As our countries continue to work together, our strategic partnership will fuel new innovations to help people across the globe, promoting a more prosperous world.