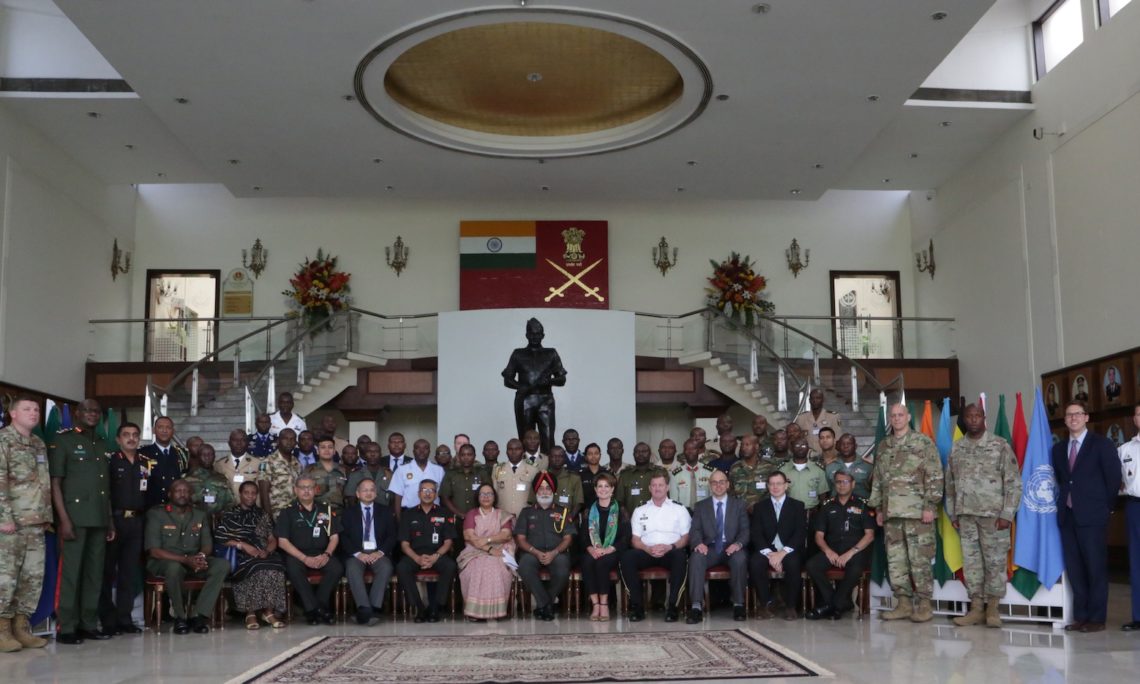 It is a sincere pleasure to be here today to celebrate the great work we’re doing together on UN peacekeeping and our growing cooperation with African partners.  I’d like to thank Secretary Ghanashyam, Lieutenant General Cheema, Lieutenant General Singh, and all the Center for UN Peacekeeping officials for all of your support and collaboration.  I would also like to acknowledge my counterparts from the African diplomatic corps who have joined us this morning and the participants who have flown great distances to share their knowledge with each other.  I know much hard work went into launching this joint peacekeeping course and everyone in this room deserves a great deal of credit.

This second iteration of the “UN Peacekeeping Course for African Partners” reflects the upward trajectory of the U.S.-India partnership.  Our growing collaboration on peacekeeping – which dates back nearly seven decades – is underpinned by two fundamental principles:

The first principle is India’s proud peacekeeping tradition, which is commensurate with its global leadership.  As you all know, this year marks the 70th anniversary of India’s independence.  In his “tryst with destiny” speech, Prime Minister Nehru pledged India would “make her full and willing contribution to the promotion of world peace and the welfare of mankind.”  This idea is also embedded in India’s Constitution, which explicitly aims to “promote international peace and security” – making India one of the only nations in the world whose foundational document embraces that responsibility.

Over the past fifty years, no country has contributed more to UN peacekeeping.  Over 180,000 Indian troops have served in 48 of the UN’s 69 peacekeeping missions – a higher proportion than any other country – with many of these missions having been in sub-Saharan Africa.

The second principle is the transformation of the U.S.-India bilateral relationship into a global partnership.  From countering terrorism and protecting the global commons to exploring space and expanding trade, the United States and India are working together not only for the benefit of our two nations’ citizens but also to improve lives across the globe.  The designation this year of India as a Major Defense Partner of the United States further underscores the importance of our two nations as net security providers in the global arena.  This course is a great example of what we are doing together.

As Prime Minister Modi said in his 2016 address to the U.S. Congress, “A strong India-U.S. partnership can anchor peace, prosperity, and stability from Asia to Africa and from the Indian Ocean to the Pacific.”  Three weeks ago, President Trump and Prime Minister Modi reaffirmed in Washington that our “close partnership” is “central to peace and stability.”  The bold vision articulated by the two leaders – “Prosperity through Partnership” – serves as the guiding principle for every aspect of our cooperation.

Today we commemorate another chapter in U.S.-Indian cooperation, by working together with our African partners to build and enhance UN peacekeeping capacity.  The goal of this training program, now in its second year, is to build capacity at a time when the need for well-trained peacekeepers is more critical than ever.

The nature of peacekeeping in the 21st century is constantly evolving.  Today, two-thirds of peacekeepers operate in active conflicts; the highest percentage ever.  In recent years, we have seen the acute effects of state failure in many areas of the world and the extremist elements that often fill the vacuum created by instability.  Meeting these challenges requires the international community to revamp its support for peacekeeping operations and to build local capacity.

Both the United States and India share an abiding commitment to our partnerships with African nations, and we are proud to be working together to build security capacity on the continent of Africa.  As we have seen with the African Union Mission in Somalia, African nations have shouldered some of the heaviest security burdens in the world.  But the demand for UN peacekeepers, especially with knowledge of local conditions and terrain, is growing in Africa and elsewhere.

Through this course, participants will gain valuable experience and in turn train others back home.  Our goal is to work together as equal partners, to leverage each other’s expertise, to learn from one another, and thus, build self-sustaining programs.  This is a collective exercise and a learning opportunity for all of us; in this context, your feedback is very helpful.

I want to thank everyone who is participating in this course, including the U.S. instructors and India’s Center for UN Peacekeeping and its director, Colonel Sehgal.  I also want to thank our colleagues at the Ministry of External Affairs UN Political Division who made this entire initiative possible.  As we look to the future, I sincerely hope we can think ambitiously about how to deepen our cooperation and to expand the scope.  By working together, we can strengthen UN peacekeeping, build closer bonds between our nations, and make lasting contributions toward international peace and security.

For those in uniform who wear the blue helmets, often in the world’s danger spots, I thank you for your service.  In this critical work, the United States will be your enduring partner.  Thank you and best of luck to all the participants.