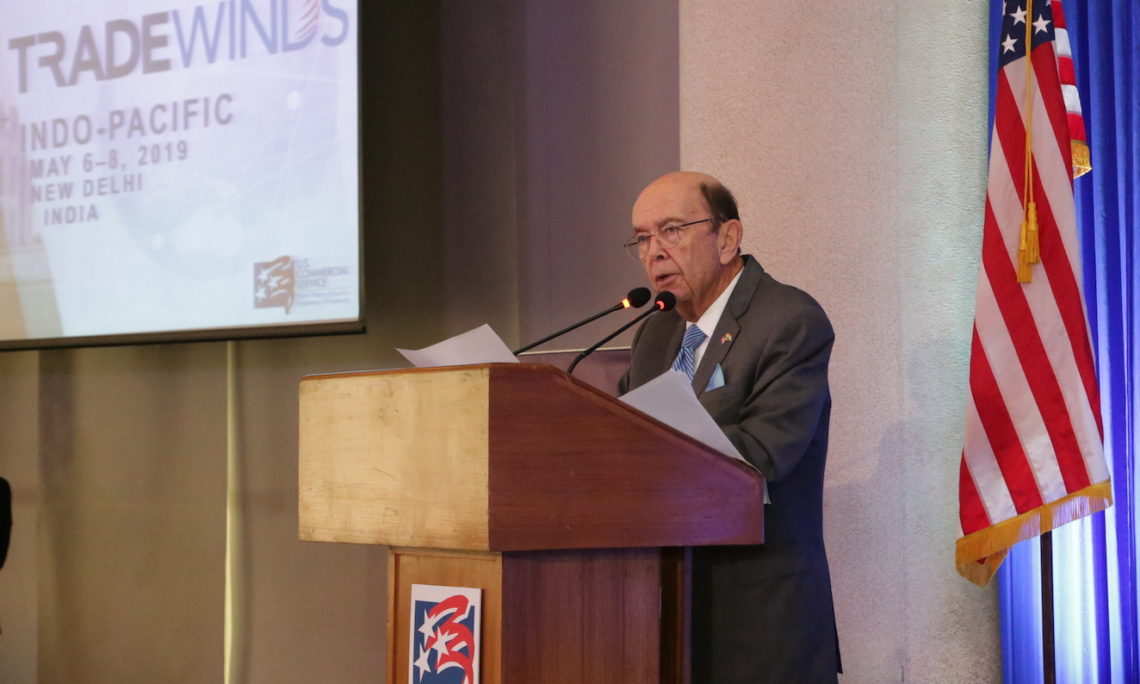 Thank you, Ken, for the kind introduction, and for your leadership in strengthening the bonds between the world’s oldest and the world’s biggest democracies.

It is great to see all the wonderful American companies here in New Delhi for the Trade Winds Conference and Trade Mission.

I know you have all traveled a long way.

And I thank you for joining us.

We are excited that so many U.S. companies are dedicated to building commercial relationships with the countries and customers in this region of the world.

And we in the government are prepared to help you in any way we can to make this a productive visit.

Thanks also to our many sponsors for supporting Trade Winds.

With your help and civic commitment to the American business community, and the hundreds of thousands of American workers represented by your companies here today, we are at full capacity.

And, in fact, we had to turn away some applicants.

Two years ago, President Trump laid out his vision for a free, open, and prosperous Indo-Pacific Region — one where independent nations grow stronger.

The Indo-Pacific Region is strategically and economically significant.

It accounts for two-thirds of all global trade.

These countries are seeking high-quality goods and services to sustain and develop their economies.

U.S. companies are extremely well positioned to meet these demands, including in the important area of infrastructure.

The Asian Development Bank estimates that $1.7 trillion needs to be invested in the region’s infrastructure every year.

This is a daunting sum!

But, with its strong and growing economy, India is key to the Administration’s approach to the Indo-Pacific region.

Last year, India’s real GDP reached an estimated 7.1 percent growth; and is projected to increase by a very healthy 7.4 percent this year.

India’s population has grown by an astonishing 341 million people over the past 20 years to 1.35 billion.

Just the growth since 2000 is greater than the total population of the United States.

Combined with the 281 million people in India between the ages of 20 and 35, there are almost 600 million people either in — or soon to be entering — their primary years for consuming goods and services.

India is already the world’s third largest economy, and by 2030, it will become the world’s largest consumer market because of the rapid growth of the middle class.

Yet, today, India is only the U.S.’s 13th largest export market, due to overly restrictive market access barriers.

Meanwhile, the U.S. is India’s largest export market, accounting for something like 20% of the total.

There is a real imbalance!

And it’s an imbalance we must strive to counteract.

Last year, it’s true that bilateral trade between our countries totaled $142 billion, up almost $16 billion from 2017.

It’s also true that U.S. exports of goods to India increased last year by $7.4 billion, or an impressive 29 percent, to $33 billion.

But the problem is that goods imports from India were also up by more than 7 percent, in fact by by 12 percent, to $54 billion, representing a trade deficit in goods of $21 billion.

In the services sector, the United States also had a trade deficit with India last year, of $3 billion.

This is especially unusual – we generally have a surplus in services with most countries.

But in this case, the deficit is largely due to IT services, for which there is a very strong capability here in India.

American companies offer world-class goods and services and the highest standards of quality, safety, and innovation.

They improve the economy in every country in which they operate.

And they are eager to be more engaged here and throughout the Indo-Pacific region.

The Indian government is actively pursuing a range of development priorities, including revitalization of urban infrastructure, ensuring access to energy, and digitizing services.

We are confident that U.S. technologies and expertise can play an important role in serving India’s critical development needs.

Our strict Foreign Corrupt Practices Act also assures the Indian government that our companies will not cause scandals here.

But American companies need to operate in a transparent environment supported by the rule of law, and a level playing field.

As President Trump has said, trade relationships should be based, and must be based, on fairness and reciprocity.

These include both tariff and non-tariff barriers, as well as multiple practices and regulations that disadvantage foreign companies.

India’s average applied tariff rate of 13.8 percent, and that remains the highest of any major world economy. The very highest.

It has, for example, a 60 percent tariff on automobiles; it has a 50 percent on motorcycles; and 150 percent on alcoholic beverages.

Its bound tariff rates, namely the highest rate they can charge, on agricultural products average and incredible 113.5 percent, and some are as high as 300 percent.

These are not justified percentages. They are way too high.

We are working diligently with the Indian government and our private-sector partners to address market access issues through the U.S.-India Commercial Dialogue, and the recently reconvened U.S.-India CEO Forum.

Our goal is to eliminate barriers to U.S. companies, operating here, including data-localization restrictions that actually weaken data security and increase the cost of doing business.

Other obstacles include price controls on medical devices and pharmaceuticals, and restrictive tariffs on electronics and telecommunications products.

Tariffs for network routers and switches and parts of cellular phones are as high as 20 percent.

In stark contrast, the U.S. rate for these same products exported from India to the United States is zero – zero versus 20 percent.

That’s not a justified imbalance.

We applaud India’s commitment to addressing some of these barriers.

In the World Bank’s Ease of Doing Business report, India climbed an impressive 23 spots this year, but it still ranks only 77 out of 190 countries.

So there’s lots of room for further improvement.

We also look forward to welcoming another large India delegation to our SelectUSA conference from June 10th through 12th in Washington.

We are hoping and praying he will have a bigger delegation this year.

One of the attendees last year, JSW Steel, announced at the conference plans to make an initial $250 million investment to acquire and upgrade a steel manufacturing plant in Ohio.

JSW Steel has also begun a separate $500 million expansion of its steel plate-and-pipe mill in Texas.

According to our latest numbers for 2017, India’s foreign direct investment into the United States totaled $13.1 billion.

And that’s a good number.

But U.S. FDI into India was more than $44 billion, so we are a substantial net investor here.

We are in fact the largest foreign direct investors here by a wide margin.

It plays an increasingly important role in South Asia and in the whole Indo-Pacific region.

Therefore, in 2016, the United States elevated India as a Major Defense Partner by giving it the distinction of Strategic Trade Authorization — STA — Tier-1 status.

This allows for $2 billion worth of potential exports from the U.S. to India without the need for export licenses.

American companies now have a unique opportunity to increase defense technology sales to India which, in turn, will help balance our trade relationship.

This week’s trade mission demonstrates our resolve in taking our economic relationship to new heights.

It is the largest trade mission sponsored by the U.S. Government this entire year.

We have assembled a fantastic team of trade negotiation experts, business advocacy specialists, and U.S. and Foreign Commercial Service officers, who are here to help you.

This is what they do for a living.

So please get to know them, and utilize them in building your businesses in this important region of the world.

And because they are government, there is no charge for their services.

For those of you who will be extending your travels, we have Department of Commerce offices in 14 different markets throughout the Indo-Pacific region.

And we provide American companies with market data and intelligence on business opportunities in the region.

I am pleased that we will be hosting next year’s Trade Winds Mission and Conference in Hong Kong.

That will do a lot to unlock new opportunities for U.S. companies in the Indo-Pacific region.

We welcome your suggestions on other tools or other programs that can improve your business in India, in the Indo-Pacific, and throughout the world.

Thank you for the expense, and the time you are taking to be here.

The size of this delegation provides India and the countries in this region with a clear demonstration of our commitment to opening these markets for all of your great American products.

My best wishes to you for a productive visit.