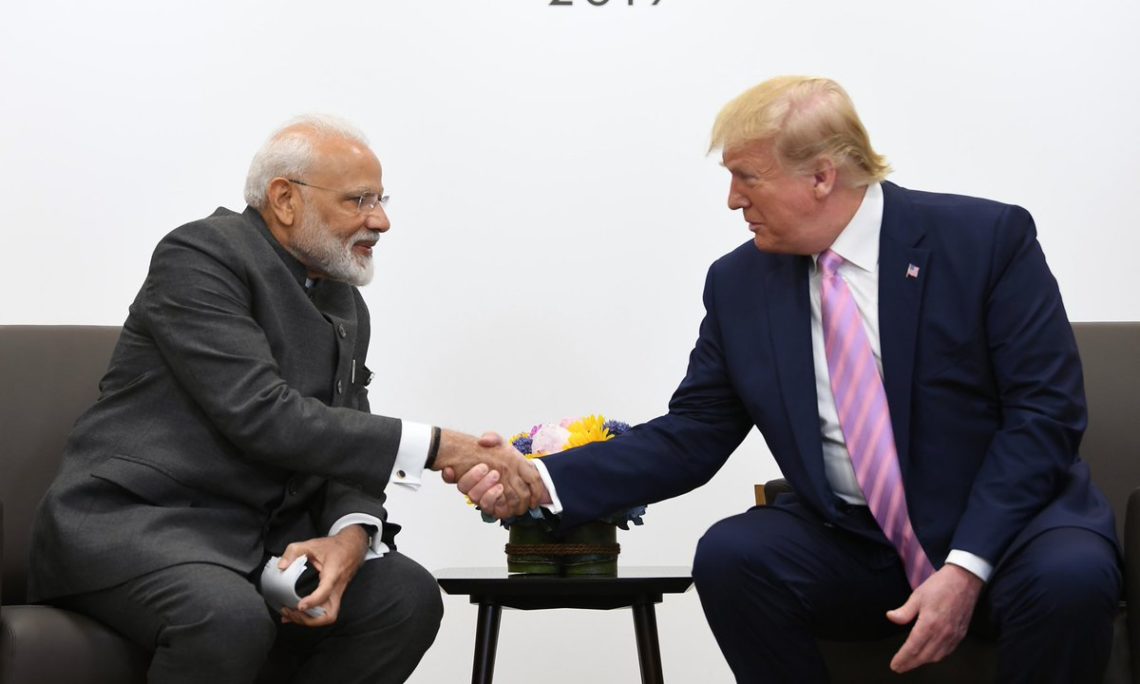 PRIME MINISTER MODI:  (As interpreted.)  Mr. President, at the beginning of my second term, I’m really very happy to have this opportunity to meet you.  I would also like to express my gratitude after the huge democracy in India.  The people of India gave us this huge victory — this landslide victory.

The people of India have reposed — have given me a second mandate.  And immediately afterwards, after the victory in the elections, you called me over the telephone and congratulated me.  And, two days ago, Secretary of State Pompeo carried a letter from you, which was a very warm letter.  Also, it expressed the kind of sentiments that you have towards India, your love towards India.  You expressed those issues.  Once again, Mr. President, let me thank you.

Secretary Pompeo visited India two days ago.  We had an opportunity to have discussions on many issues.  Also, he carried, as I said a short while ago, your warm message.  Given that we have a time limitation, in this meeting we would like to discuss four issues: Iran, 5G, bilateral relations, and defense relations.

Once again, let me thank you, Mr. President, for having taken out time to meet me.  Thank you.

PRESIDENT TRUMP:  Well, thank you very much, Mr. Prime Minister.  And we’ve become great friends, and our countries have never been closer.  I can say that with surety.  And we work together in many ways, including military.  But we certainly work together on trade, and we’ll be discussing trade today.

You did indeed have a landslide election.  That was a great election.  Seventy-two percent, as I understand it.  And that, in the United States, would be called a very big victory.  And you deserve it.  You’ve done a great job pulling everybody together.  You had many factions.

I remember when you first took over, we were talking, and you had many factions and they were fighting with each other.  And now they all get along.  And you just — you’ve really brought it together, and I think it’s a fantastic tribute to you and your abilities.

So, it’s been a lot of fun being with you.  We’ve had some good talks already.  And, again, I think you’ll be hearing some very productive elements come out.

We had a joint meeting with — as you know, as the press was there, we had a very successful meeting with Prime Minister Abe.  And we also are going to be announcing some very big trade transactions, some very big trade deals.  They’re moving many plants — auto plants — into the United States.  And they announced some more this morning, and we’re very happy about that.

So, again, I want to thank you, and I want to congratulate you.  And I look forward to talking.  Thank you very much.

Q    Mr. President, what is the most important thing for India to do on trade?

PRESIDENT TRUMP:  Well, it’s something we’re going to be talking about.  We understand the subject very well.  We actually sell Huawei many of its parts.  A lot of people don’t know that, but the United States sells.  We have great companies that are the leaders of a lot of what Huawei does, and we sell them a lot.  So we’re going to be discussing that and also how India fits in.  We’ll be discussing Huawei.

Q    Mr. President, what will be your message on Iran?

PRESIDENT TRUMP:  On who?

PRESIDENT TRUMP:  Well, it’s the same message I’ve been telling you for the last three days.  It’s — we have a lot of time.  There’s no rush.  They can take their time.  There’s absolutely no time pressure.  I think that in the end, hopefully, it’s going to work out.  If it does, great.  And if doesn’t, you’ll be hearing about it.

PRESIDENT TRUMP:  Thank you very much everybody.