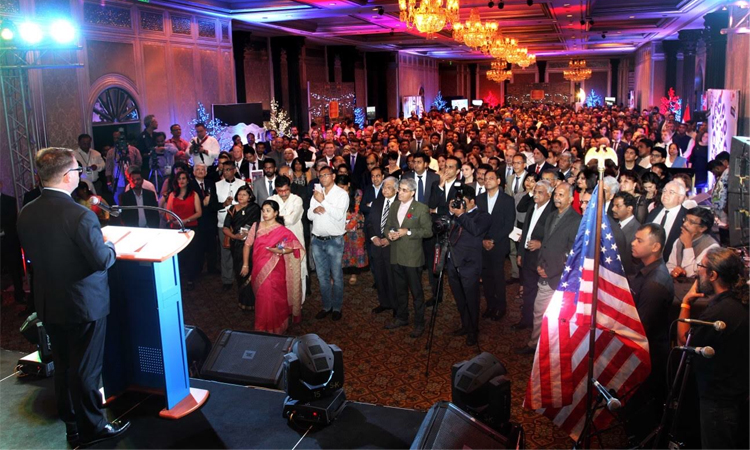 Consul General Kagan: Thank you so much. I want to thank all of you for coming. Distinguished guests, fellow diplomats, friends and colleagues from the consulate. A special thanks to Minister Desai who agreed to come despite being on a very, very tight schedule. Minister, I know that you have a train to catch, so if you need to go we totally understand.

Thank you all for coming tonight to mark the 242nd Anniversary of the independence of the United States. It’s great to have so many friends here to celebrate something that’s very special for us.

I will say that I want to really recognize, I think all of you will join me giving a round of applause to our Marine Security Guard Detachment who, as always, show impeccable skills in posting the colors. [Applause]. Thank you.

And I want to thank my entire consulate team for the work that they’ve put in to arranging tonight. We really appreciate it, and I’m sure that over the course of the evening everyone’s going to enjoy the fruits of their labors.

I also want to say thank you to the Taj Palace team led by General Manager Taljinder Singh, and his entire team who as always have been impeccable in their support and their service to us.

And of course our event sponsors without whom this would be a much drier and less pleasant event. So thank you very, very much for your generous support. [Applause].

It was almost exactly one year ago that I arrived in Mumbai with my fabulous wife Cindy, our three children, and [our dog] Mango. Now a very good name if you’re going to be serving in India. A coincidence, I promise. Although I’ve now started telling people that her first name is Alfonso. [Laughter].

A year ago I stood here and I was overwhelmed with the number of people that I saw. Tonight after a year of being incredibly welcomed throughout Western India and particularly Mumbai, I stand here and I’m overwhelmed by the number of friends that I see before me, and I want to thank all of our friends for coming tonight.

Cindy and I and our children, and I think I speak for all the people who have the great privilege pleasure of serving at the U.S. Consulate in Mumbai, we’ve been overwhelmed by the warmth and the generosity and the friendship with which people throughout Western India have received us. By warmth, I don’t just mean the temperature, although tonight it’s a little bit cooler. But I really mean the generosity, the true sharing, the desire to be welcoming that we get all the time, at every level of society. And the true genuine spirit with which that comes.

Some of the few things that we’ve found over the course of our time here has been a street food tour on Mohammed Ali Road during Ramadan. Going to the Ganpati pandals. The Guru Gurpurab celebration. The dandiya dance in the Navratri celebration at Ahmedabad. Having a full 21-dish Maharashtrian thali in Nagpur. Meeting some of Bollywood’s biggest stars. Visiting the Mumbai Fire Brigade, the first gender integrated fire unit in Maharashtra. Joining really inspiring Mumbaikars at beach cleanups in Versova and Dadar. Eating prawns balchao at the beach in Goa. And visiting the truly amazing Madhya Pradesh Tribal Art Museum in Bhopal. Also trying to get three very cranky children up at 4 o’clock in the morning to go, when we went to Darjeeling to go see Mt. Kanchenjunga which, not only did we have to get them out the door, but it turned out it was raining and we couldn’t see the mountain. But that was still an experience that we will never forget. Also we’ve seen Bintu the tigress, the two-year-old tigress in a visit to Pench National Park. All those things have made our experience in Mumbai, our experience in Western India, our experience in India so special. And I thank all of you for being part of that.

So many people here tonight have in some way welcomed us, been generous with us, shared your stories, shared your experiences, given us some great advice on things to do or in some cases not to do.

That’s been so special. It really reaffirms for me what I knew on my first day, which was that the special relationship between the people of the United States and the people of India is deep, strong, and continues to grow.

It’s a relationship that has been nurtured in so many ways by people who are here tonight. And for those of us in the consulate, we are truly grateful and honored to have the support of so many friends who believe in the relationship, [who] believe that U.S.-India relations are good for the peoples of both of our countries, and they’re very much in the interest of both of our countries. And we really, really appreciate the guidance and the advice that you’ve given us as we’ve tried to move forward with this very ambitious agenda of being the two biggest democracies in the world, countries who have deep and abiding interests in the rule of law, in a rules-based international order, and in a free and fair exchange of commerce around the world bringing us together. So thank you for that.

In October we will celebrate the 180th Anniversary of the arrival of the first U.S. consul in then-Bombay. It’s hard to believe. I am his 46th successor! There have been 47 in an unbroken line of American consuls who have represented the interests of the United States in Mumbai and in western India. I consider that to be a very weighty responsibility. One that my colleagues and I at the consulate feel. Because we know that so much of the way the relationship is today was started here. It was people in western India, people in Mumbai who were outward looking, who were committed to trade, who were committed to personal improvement, committed to education, who were at the heart of building the relationship that we share today.

I think for those of us who are here we also see that those relations keep growing. That, unlike many relationships that I have worked on that have been built from the top down, which started as sort of between governments, between elites, and then slowly broadened to include the people. The U.S.-India relationship is very different because as almost everyone here knows, the relationship with the government hasn’t always been as good as it should be, but the relationship between the people of our two countries has been what has really led to the pressure on both governments to improve relations. It has brought us to where we are today, where we are increasingly critical partners to each other as we deal with some of the world’s most challenging and important problems.

That’s true about collaboration in the defense and security space. It’s true of our cooperation in the United Nations and other international fora to try and ensure that the global order works for all of the world’s citizens.

We’ve made real strides also on things that are important to our development in both countries and the stream of innovation I think highlights the fact that we recognize that the power of ideas from our two countries is the heart of what has allowed both of our countries to develop and to become stronger.

We also have made progress on strategic energy security. Just this spring, the first shipment of U.S. LNG arrived in Maharashtra. The beginning of a long-term contract with a Texas-based company that I think will help increase energy security and stability in India.

We’ve also worked to build trade investment in other ways. Earlier this summer, and many of you were along for this. Our Ambassador, Ambassador Juster, led a delegation of 96 Indian investors, the largest ever, to a major U.S. investment summit, our SelectUSA summit. Just two weeks ago, we partnered with Mumbai-based Dewan Housing Finance Corporation to sign a loan-guarantee program that will give, that will expand the availability of credit to private-sector health-care developers in second-tier and third-tier cities. This will lead to up to $10 million of credit that will go primarily to women-owned businesses in this area.

Those are some specific examples. I think, more generally, what we believe at the consulate is that we have to be ambitious. What we have done is only the beginning and with the support of the people in this room and the people throughout India we must think of bigger things that will help both countries continue to prosper and be strong. That’s why tonight’s theme, innovation, is so important. And it’s interesting. When we think of innovation, we often think of technology. We think of iPhones, we think of airplanes, we think of railroads, and whatever the technology of things. But if you think about it, both the United States and India reflected extraordinary innovation in our very founding. The radical idea for the United States 242 years ago, it was a radical idea that you could have governance of the people, by the people, and for the people, and that that inspired our founders to declare their independence from what was then the world’s greatest empire. Equally innovative was the idea that non-violence could defeat the world’s greatest empire and lead to independence in India.

So innovation is in our DNA, and I think that we are partners as we go forward on this because we share not just values of democracy, free speech, respect for liberty and tolerance and diversity, but also we share respect for the idea that letting individuals have the freedom to innovate is what will be best for both of our countries. And we know that entrepreneurship is something that’s very much in the DNA both of Americans and Indians. And that’s one of the things that for Americans we love about seeing, coming to India and seeing just the energy and the dynamism of entrepreneurs here. Indians are also equally known for their entrepreneurism and their drive everywhere in the world. I would note that Indian entrepreneurs have played a really important part in recent decades of helping strengthen the relations between our two countries. They’ve made a real mark in the American technology landscape which also has benefited India.

Just as an aside, about a third of all immigrant-founded startups in the U.S. have Indian founders, which is the most of any group in the United States. But as I reflect on the last year of being here, and how much I’ve learned, the innovative ideas that we see in the ballroom around us, I’m confident that we are going in the right direction and that we will continue to strengthen the relations of both of our countries.

So with that, let me say thank you for coming, thank you for joining us, thank you for being our partners in what we have done and what we will do, and I ask all of you tonight one thing. That is, have a good time. Enjoy yourselves. We’re going to hear some great music from Victor and the Crowns. And I hope you will avail yourselves of the “spirits” of innovation that we’ll be serving at the bar.