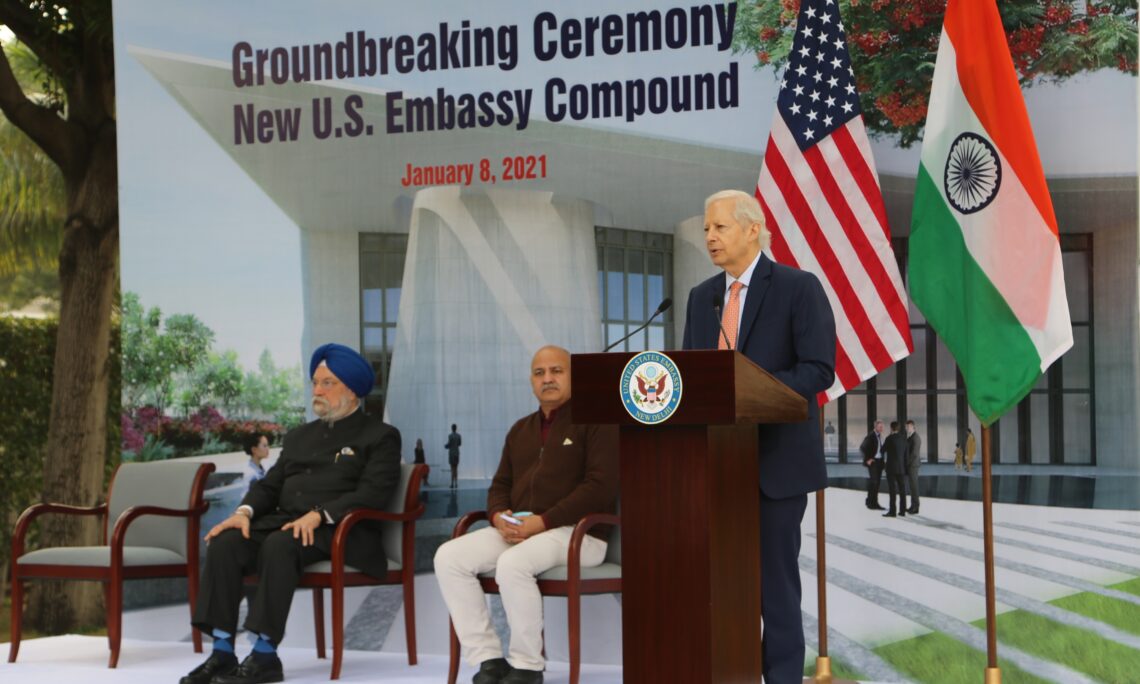 Thank you for joining us this afternoon as the U.S. Embassy in New Delhi begins a new chapter in our relationship with India – the groundbreaking for our new Chancery building.  The project we celebrate today is more than a series of buildings and infrastructure.  It reflects America’s enduring commitment to the U.S.-India partnership and is a testament to the strength and longevity of that partnership.

On September 1, 1956, U.S. Supreme Court Chief Justice Earl Warren laid the cornerstone for the current Chancery building, designed by world-renowned architect Edward Durell Stone.  Stone hoped to capture the best in modern American architecture and blend it with Indian design – which he did quite successfully.  Chief Justice Warren expressed the aspiration that the Chancery would be “a temple of peace,” and that all buildings to be erected on this compound would be “devoted to peace and harmony on earth.”

We formally opened the Chancery on January 8, 1959 in a ceremony attended by Prime Minister Nehru.  Frank Lloyd Wright called the Chancery, “one of the finest buildings of the past 100 years.” And at the opening ceremony, U.S. Ambassador Ellsworth Bunker said, “to me this building is symbolic of what can be achieved through the cooperation of our two countries.  From beginning to end, it has been a joint venture.”

Every day, my colleagues and I trace the steps of generations of American diplomats, who for decades have passed the reflecting pool and entered this historic building under the Great Seal of the United States of America.  For those of us who are fortunate to serve in India and work on the strategic partnership between our two countries, Stone’s buildings remain a powerful symbol of what the United States and India can achieve together.

Today, on the 62nd anniversary of the opening of the Embassy, Stone’s vision and Warren’s words take on renewed meaning, as our countries and people have grown closer than ever before.  The U.S.-India partnership is one of the most consequential relationships of the 21stcentury, covering a broad range of issues, including defense, non-proliferation, counterterrorism, trade, investment, energy, the environment, health, education, science and technology, agriculture, space, the oceans, and so much more.

The New Embassy Compound is an investment in this partnership and lays the foundation for its future.  The new Chancery building, which will be located directly across from the historic Chancery, and the Support Annex on the next block, will ensure our ability to continue to nurture the U.S.-India relationship to the benefit of our two nations and the world for decades to come.

This endeavor is also an investment in the local community.  Throughout the project, an estimated $200 million will be invested in the local economy, and the project will employ approximately 800 Indian workers at the peak of construction activities.  These workers will have the opportunity to learn new technical skills and safety awareness that will help distinguish them in the local market.

Finally, the new Compound is an investment in a more sustainable environment, with the new Chancery and Support Annex slated to be certified at the Silver level by the Leadership in Energy and Environmental Design program.  The new design is estimated to reduce overall total water usage by 37 percent and potable water usage by 74 percent.  The reflecting pool will be redesigned to capture storm water during the monsoon season, storing one million gallons for treatment and reuse in an underground cistern.  The campus will also include on-site renewable power generation, with roof-mounted photovoltaic arrays and solar hot water heaters.  And throughout the project, the Embassy will plant over 2,000 trees in public areas in New Delhi.

This project would not be possible without the support and hard work of so many people.  I extend my appreciation to the Ministry of External Affairs for its continued support and facilitation.  I also thank the New Delhi Municipal Corporation for your guidance and assistance with planning, design review, and permitting.

I would like to recognize architects Marion Weiss and Michael Manfredi, whose design honors the legacy of Edward Durell Stone’s historic buildings, while setting a new stage for 21st century diplomacy; and B.L. Harbert International Construction Company, which will turn Marion’s and Michael’s design into buildings.

In addition, I thank the U.S. Department of State’s Bureau of Overseas Building Operations, especially Jorge Vazquez and his team on the ground, for their management of this project.

These grounds and buildings hold many memories.  Some moments are iconic, such as First Lady Jackie Kennedy’s graceful walk across the concrete pads of the Chancery building’s interior water garden in 1961, or the casual drive by actors Shashi Kapoor and Sharmila Tagore around the reflecting pool in the 1965 Bollywood film Waqt.  Others may seemingly be ordinary moments, but they have led to extraordinary achievements by and for our people.  We look forward to the next 62 years and beyond, and to the continued success of the U.S.-India partnership.