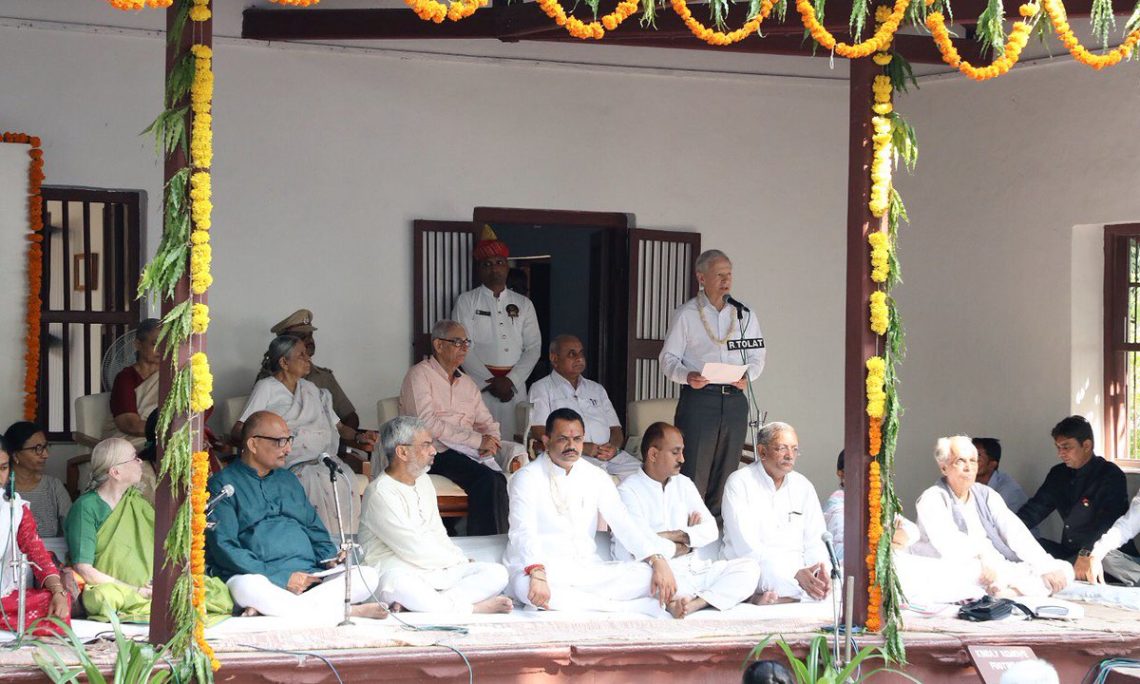 Sabarmati Ashram, Gujarat: Governor of Gujarat Kohli, Deputy Chief Minister Patel, Sabarmati Ashram Chairperson Bhatt, Dr. Bang, distinguished guests, ladies and gentlemen, boys and girls. I am deeply honored to be with you today at the Sabarmati Ashram to mark the 149th anniversary of the birth of Mahatma Gandhi.

As the United States Ambassador to India, my focus is often on the future – what can we do to expand the relationship between our two countries. How can the United States and India further enhance our already deep connections?

It is therefore a true pleasure for me today to be able to focus less on the future and, instead, take this opportunity to reflect on the past – including the shared history between India and the United States. Standing on this sacred spot where Gandhi began his March to Dandi in 1930, I am reminded of the American proponent of “non-violent resistance,” Dr. Martin Luther King, Jr. Almost 30 years after Gandhi began his march, Dr. King came to this Ashram, on March 1, 1959, and stood on this very spot. Of that trip, Dr. King said, “To other countries I may go as a tourist, but to India I come as a pilgrim.”

Those are very profound words for a Christian minister. But as King also explained in his own words, “Gandhi was the guiding light of our technique of non-violent social change.” And so, India’s Mahatma Gandhi was a major inspiration for America’s civil rights movement. In part because of Gandhi, African-Americans went on to win the right to be treated as fully equal under the law – as all people should be. And that had its beginnings here, in this place, by a man whose moral reason not only shined light on colonial injustice, but also inspired my country’s transformation to a more just and tolerant society.

As Gandhi wrote in July of 1935, “Non-violence is the greatest force at the disposal of mankind. It is mightier than the mightiest weapon of destruction devised by the ingenuity of man.” Those indeed are words that apply to us today in our own struggles, whether it be with regard to a local dispute, the freedom of an oppressed people, or a potential international conflict. We would all be wise to remember Gandhi’s words as we celebrate the anniversary of his birth.
Beyond non-violent resistance, Gandhi – and King – stood for other shared values that continue to resonate today. These include: Equality among all people, regardless of gender, race, or religion; Love as the foundation of all human relationships; Humility in leadership; Selflessness in all actions; and Hope, always hope. These ideals transcend our two national heroes and are among the values that surely guide the peoples of India and America.

I would like to close with a brief word about the relationship between our two countries. We are the largest and oldest democracies in the world, and we have never been closer to each other than we are today. Our shared history goes back more than 200 years, when the United States established its first diplomatic presence in India in 1792. Our relationship endures and continues to grow because both of our peoples cherish personal freedom, democratic government, the rule of law, and respect for diversity. We have a shared interest in promoting global security and stability as well as economic prosperity through innovation, entrepreneurship, trade, and investment. The United States respects India as a leading global power and a key partner in our efforts to ensure that the Indo-Pacific is a region of peace, stability, and prosperity. Ours is a friendship that I believe Gandhi would look upon with great favor.

Thank you again for inviting me to speak today. It is a very special privilege to be here with you.