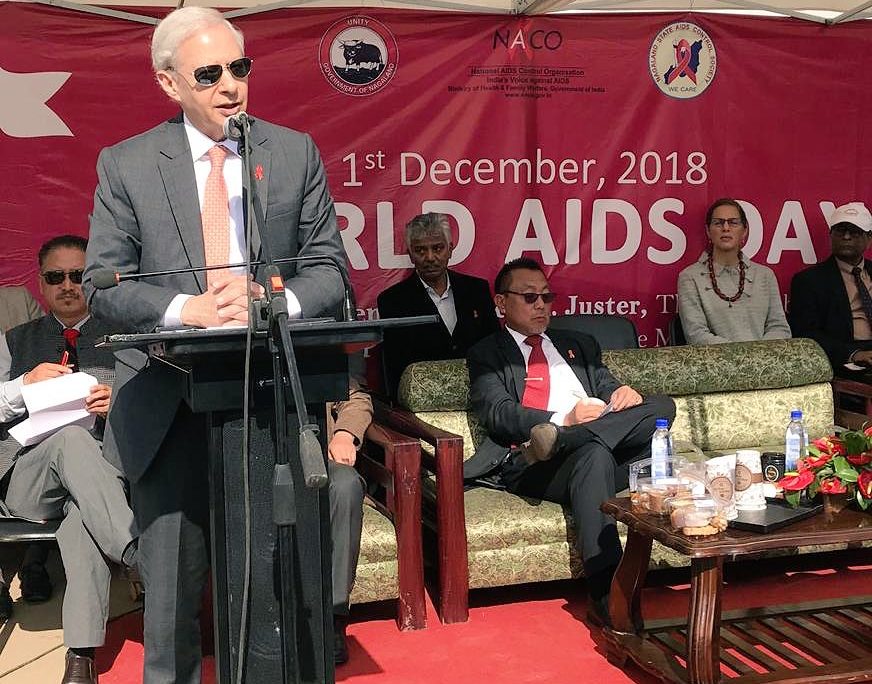 Good afternoon.  Thank you to the Nagaland State AIDS Control Society for inviting me to commemorate World AIDS Day with you.  Each year on this day, the United States government stands in support of people worldwide living with HIV, and we solemnly remember those who have died from AIDS.

Today, I would like to recognize the ongoing efforts of India’s government, NGOs, health care providers, faith-based and community-based organizations, and members of the community in the fight against HIV and AIDS.  India’s National AIDS Control Program is acclaimed as a global model, and the U.S. government is proud to partner in and support these efforts.  India’s response has been remarkably successful in containing the spread of HIV, with a 27 percent decline in new HIV infections since 2010.

The theme for this year’s World AIDS Day is “Know Your Status.”  This theme is particularly appropriate because the Indian government recently passed the HIV Bill, which aims to safeguard the rights of people living with HIV, and to confront social stigmas that present obstacles to their efforts to lead normal lives.  I am optimistic that the HIV Bill will contribute to improved access throughout India to HIV testing.  This would be an important step in understanding the challenges posed by HIV in the country.  I applaud the efforts of everyone here in pushing to get this bill passed.

I am pleased that the U.S. government has played an important role in this region to fight HIV and AIDS.  The U.S. President’s Emergency Plan for AIDS Relief – known as PEPFAR – in collaboration with the National AIDS Control Organization, and State AIDS Control Societies, funds Project Sunrise.  Project Sunrise implements several innovative approaches to address AIDS in India, such as HIV index testing, a secondary needle and syringe distribution program, and a satellite opioid substitution therapy program.  I thank everyone for their diligent work in making Project Sunrise a model program for collective action against HIV.

While this is the 30th anniversary of World AIDS Day, it is also the 15th anniversary of PEPFAR.  During the past 15 years, the United States, through PEPFAR, has helped save more than 16 million lives, prevented millions of HIV infections, and brought the world closer than ever to controlling the HIV pandemic.

The United States has invested more than $80 billion in the global HIV/AIDS response – the largest commitment by any nation to address a single disease.  On this 30th anniversary of World AIDS Day, we reflect, as well, on the significant progress that has been made worldwide, and we commit to redoubling our efforts to control the HIV epidemic in India.