Home मुखपृष्ठ | News & Events | Remarks by Ambassador Kenneth I. Juster at the Regional Conference on Enhancing Energy Cooperation and Integration in South Asia 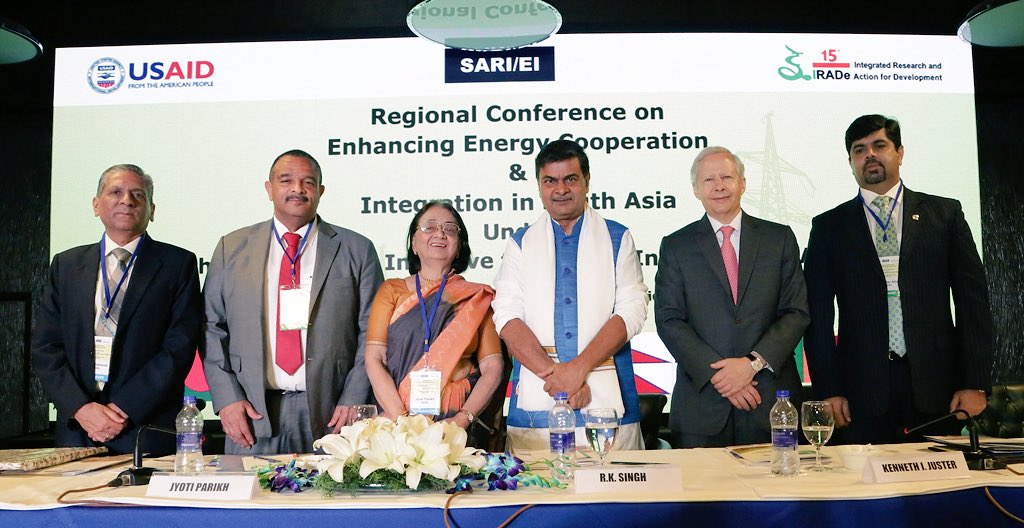 It is a great honor to be here this morning with Minister Singh and other distinguished panelists, as well as the delegates from all of our South Asian partners.  On behalf of the U.S. Government, I welcome you to the Regional Conference on Enhancing Energy Cooperation and Integration in South Asia.

Energy security is a critical issue for the entire South Asian region.  This is one of the fastest growing regions in the world, with collective economic growth expected to reach 6.9 percent in 2018.  The region is also home to nearly one-fourth of the world’s population.  Yet per capita energy consumption remains among the lowest in the world and far below the global average.

Rapid growth, rising industrialization, and increasing population will greatly increase the region’s demand for energy and electricity in the future.  This will produce a growing dependence on energy imports, primarily oil.  Energy security thus presents a critical challenge requiring each country to look beyond its own borders for solutions.

Leaders and policy makers in South Asia recognize the importance of energy cooperation.  Here in India, energy diplomacy is an integral part of Prime Minister Modi’s Look East Policy.  At the recent Summit of the Shanghai Cooperation Organization in China in June, Prime Minister Modi emphasized that India’s top priority remains connectivity – of all types – with its neighbors.  For India, regional connectivity provides a pathway for meeting the power needs of its northeastern states – a region that is difficult for India to service due to its geography.  While India remains the electricity source for these states, with regional connectivity it can use transmission infrastructure in Bangladesh to expand power access, improve reliability, and lower pricing in those remote states.

Similarly, Bangladesh saves $500 million annually by importing power from India that is lower in cost than the fuel it would otherwise import.  Bangladesh is also examining the possibility of further expanding power imports from India to help meet its rising energy demands.  For Bangladesh, a regionally-integrated grid not only creates opportunities to leverage the Indian electricity markets, but also can create opportunities to import power from Nepal and Bhutan.  This will increase competition in the power market, thereby lowering the cost of electricity for Bangladeshis.

For Nepal, regional connectivity will help alleviate a current shortfall in power supply.  As Nepal, over time, increasingly develops and generates its own hydro power, it will be able to sell excess electricity to its neighbors and, thereby, generate trade revenue.

A 2016 World Bank study has estimated savings of approximately $100 billion over 25 years as a result of regional electricity integration in South Asia.  Practical experience so far underlines the benefits of regional power trade.  As noted, Bangladesh already saves about $500 million annually by importing power from India.  And a study conducted by the South Asia Regional Initiative project shows that expanded power trade between India and Nepal could, under the most optimistic scenario, increase Nepal’s GDP by almost 40 percent by 2045.

Recognizing these benefits, the countries in the region have formalized energy cooperation through both the South Asia Association for Regional Cooperation’s Framework Agreement for Energy Cooperation, and the Power Trade Agreement between India and Nepal.  These agreements lay the foundation for a regional power market in South Asia.  I also want to congratulate Minister Singh for the Government of India’s leadership in developing India’s Draft Guidelines and Regulatory Framework on Cross-Border Trade of Electricity.  All of these are important steps that will promote regional grid integration.

The U.S. Government’s Support for the South Asia Regional Initiative

The U.S. government strongly supports broad partnership in South Asia for a more prosperous and stable region.  To facilitate efforts toward a regional energy market, the U.S. Agency for International Development works with eight South Asian countries under its South Asia Regional Initiative program – Afghanistan, Bangladesh, Bhutan, India, Nepal, Pakistan, Sri Lanka, and the Maldives.  Since 2000, this Initiative has helped create an enabling environment for regional energy cooperation through technical assistance and analytical studies, peer exchanges, consensus building, and conferences, such as the one we are hosting today.  These efforts have grown from the initial trust-building and awareness activities in the early 2000s to in-depth technical studies over the past decade that have identified best practices for cross-country transmission connections.

Today, this Initiative continues its work on energy security, but with a focus on cross-border electricity trade.  In the current phase, a concentrated effort has been made to involve the participating countries through three inter-governmental task forces:  one on harmonization of regulations and legislation; a second on the advancement of transmission interconnections; and a third on the establishment of a South Asia regional electricity market.

I would like to note just a few of our important achievements:

While there has been significant progress in the region, we must continue to work to promote a robust and vibrant energy market for South Asia.  We can do this by strengthening our institutions and the rule of law to demonstrate the regional benefits of such an initiative.  We look to Minister Singh and his colleagues from the Ministry of Power, as well as to all of the senior delegates from Bangladesh, Bhutan, Nepal, Sri Lanka, and the ASEAN countries to define the future of the South Asia regional power market.

I would again like to acknowledge Minister Singh for India’s leadership in reforming its power markets and deploying clean energy.  These efforts provide an excellent example to the entire region of pioneering a new and more sustainable path to prosperity and development.

I applaud all our colleagues in the region for joining in this pursuit of regional grid integration.  The United States is proud to partner with each country to ensure energy security, expand prosperity, and promote a rules-based order in South Asia.  I am pleased to announce that we are extending the Initiative for an additional four years in order to continue pursuing our ambitious goals.

U.S. Secretary of State Mike Pompeo also recently launched the Asia Enhancing Development and Growth through Energy effort, known as Asia EDGE.  This is an initiative that focuses on assisting countries to foster regional connectivity and market integration.  In addition, the U.S. Department of State is planning a regional connectivity conference in the coming months that will support stronger regional economic integration, infrastructure, and trade.  And our Millennium Challenge Corporation is deploying $500 million in U.S. government support for infrastructure that facilitates trade between Nepal and India.  However, it is our collaboration with your countries that unifies various energy programs through the South Asia Regional Initiative and acts as a conduit to apply local lessons to the broader region – so that all of South Asia might benefit.

In conclusion, I would like to thank USAID’s implementing partner for this Initiative – Integrated Research and Action for Development – for its excellent work over the past six years.  By bringing together policy makers, regulators, financial institutions, and other members of the private sector from different countries, our roadmap toward a regional electricity market will proceed forward with good momentum.

The U.S. government looks forward to continuing to support the important work of the South Asia Regional Initiative toward a more integrated and prosperous South Asia.  I thank all of you for joining us today and wish you the best in your discussions.