Home मुखपृष्ठ | News & Events | Remarks by Ambassador Kenneth I. Juster at Presentation of the U.S. Department of Labor’s 2018 Iqbal Masih Award for the Elimination of Child Labor 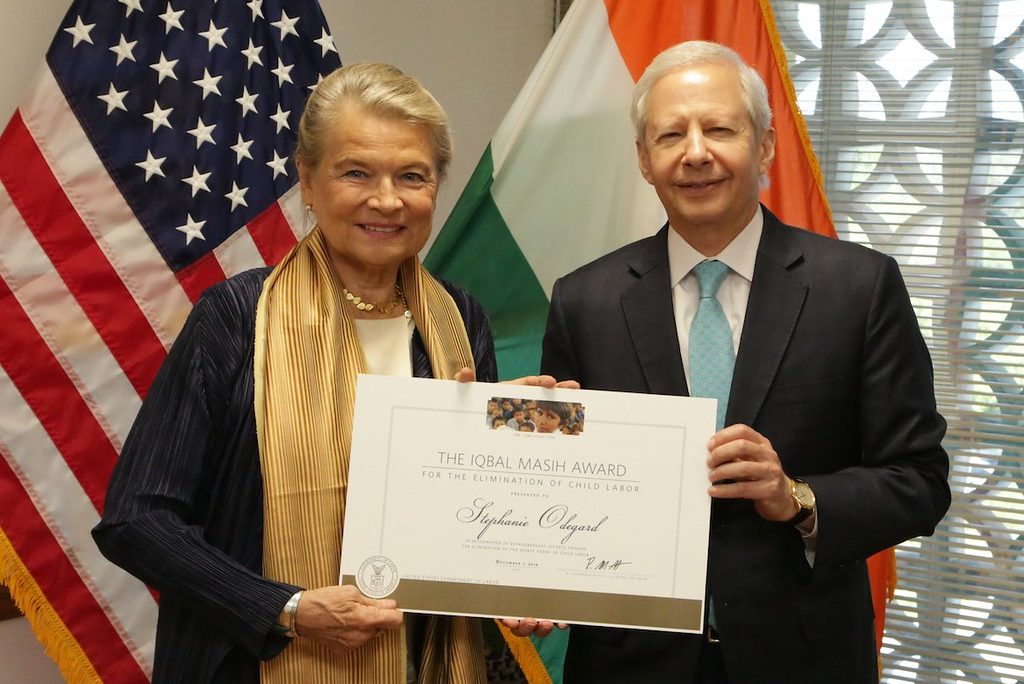 Welcome to the U.S. Embassy.  Today we have the special privilege of presenting the United States Department of Labor’s 2018 Iqbal Masih Award for the Elimination of Child Labor to Stephanie Odegard.

The award is named after a Pakistani child who was sold into slavery as a carpet weaver at age four, escaped at age ten, and became an outspoken public advocate against child exploitation before being killed at age 13.  The award recognizes someone who has made extraordinary efforts to combat the worst forms of child labor internationally, and who shares the qualities demonstrated by Iqbal Masih.  These include leadership, courage, integrity, and a commitment to end the labor exploitation of children.

Over the past 25 years, Stephanie Odegard has demonstrated these qualities in abundance.  She has raised awareness regarding child labor in the handmade carpet industry and worked tirelessly to combat this shameful practice.  Her efforts have inspired others to take action and provided much-needed assistance to exploited children.

In 1987, against the backdrop of widespread reports of rampant child labor in the carpet-making industry across South Asia, she established Odegard Carpets.  She selected a small group of factories to ensure that her looms were free of child labor and inspired other companies to join the fight against child labor.  Under her direction, Odegard Carpets contributed a modest fee for each GoodWeave certified rug, totaling more than $500,000.  Because of Ms. Odegard’s efforts, child labor in the industry diminished by two-thirds.  Moreover, working in partnership with the NGO GoodWeave and 170 other companies, she has contributed to rescuing more than 6,000 children, and provided an education to over 26,000 children.

Ms. Odegard is an inspiration to all of us.  It is a privilege to recognize her as one of two recipients of the United States Department of Labor’s 2018 Iqbal Masih Award for the Elimination of Child Labor.  Please join me in congratulating her.  And thanks to all of you for your efforts to combat child labor.