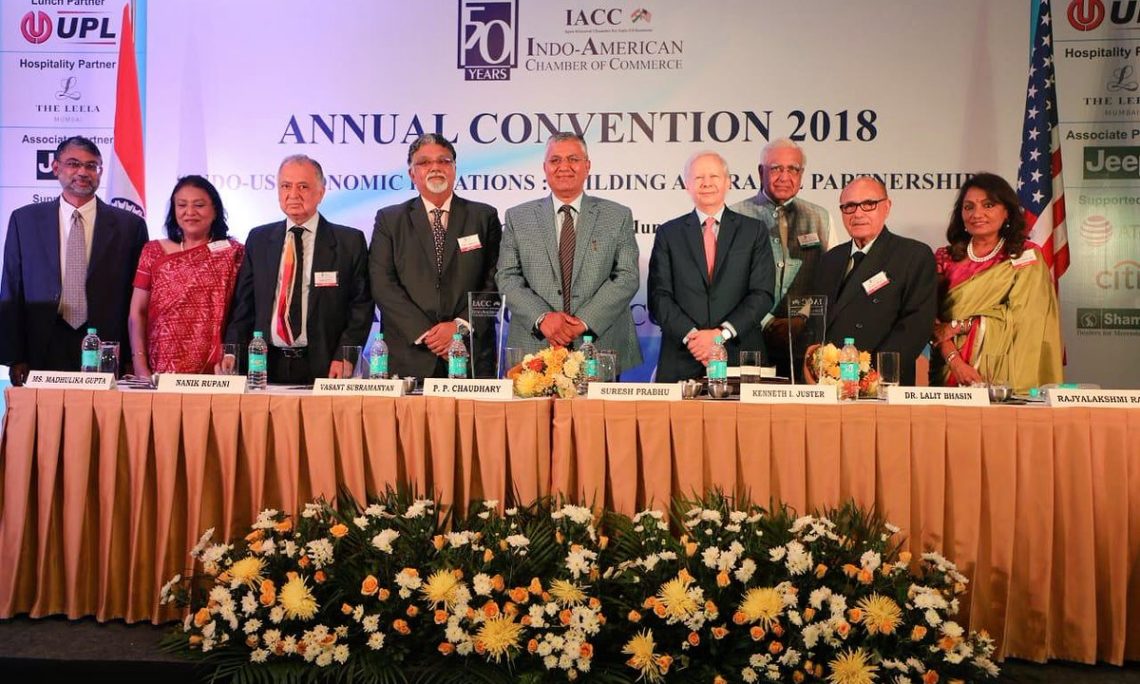 Good morning.  I am pleased to be back in Mumbai – India’s economic and business capital.  I want to thank the Indo-American Chamber of Commerce for inviting me to this year’s Annual Convention – which also commemorates the 50th anniversary of the IACC.  Indeed, I am proud to say that one of my predecessors as the U.S. Ambassador to India, Chester Bowles, was a co-founder of this organization.

While I have been to Mumbai many times, this is my fourth official visit as U.S. Ambassador.  In my last trip in May, I spoke with Minister Prabhu at the U.S.-India Civil Aviation Summit.  Now, do not tell Minister Prabhu, but the real highlight of that trip was spending time with iconic Indian cricketer Sachin Tendulkar.  Receiving a cricket lesson from the “Master Blaster” on the pitch at the Cricket Club of India remains one of my favorite moments in the past year – and perhaps in my lifetime.  Of course, speaking to you today is also an enormous honor – right up there with my afternoon with the “God of Cricket.”

All kidding aside, it is great to be here to discuss the theme of this year’s Annual Convention – “Indo-U.S. Economic Relations:  Building a Durable Partnership.”  I think you really hit upon a key phrase when discussing the Indo-U.S. relationship – the concept of a “durable partnership.”  I will to return to that phrase in just a moment.

This was the first meeting between these four leaders in this new format.  It proved to be a great success.  We announced several major initiatives, including:

We also had an excellent discussion of issues generally related to the Indo-Pacific region as well more focused exchanges on countries in South Asia, on China, and on Russia.  And following the 2+2 Dialogue, we had a very warm and cordial one-hour meeting with Prime Minister Modi.  Overall, it was a really great day – great exchanges, great body language, and a great success.  It further propelled our relationship on an upward trajectory.

Now let me return to the concept of building a “durable partnership” between our two countries.  We have come a long way in the past two decades in developing the sort of relationship that can weather stormy times and flourish in good times.

The 2+2 Ministerial forms one cornerstone of this “durable partnership,” as do the various other high-level government meetings we have held or will be holding between our two countries.  Just to cite a few other notable examples during my first year as the U.S. Ambassador to India:

While the media tends to focus on these high-level government meetings, folks in this room know that another key element of building a durable partnership between the United States and India is our business-to-business relationship.

It is business leaders, such as you in the IACC, who have continually moved the U.S.-India relationship in a positive direction, even when government-to-government relations were not as robust as they are today.  Without the steady drumbeat of business champions, especially from here in Mumbai, promoting trade and investment, and pushing the Indian and U.S. governments to improve relations, many of the accomplishments over the past two decades may not have been possible.

Of course, the IACC has been a leader of the business community and a critical partner over the past 50 years in promoting the U.S.-India relationship.  I am pleased that the U.S. Ambassador to India stood shoulder-to-shoulder with you in 1968 in founding this organization.  I warmly congratulate the IACC on its 50th anniversary.  And I can assure you that today’s U.S. Ambassador to India proudly continues to stand with you.

There are, in fact, other connections between then and now.  One of the founders of the IACC was Harish Mahindra, the father of Anand Mahindra, the current chair of Mahindra & Mahindra – boy, that’s a lot of Mahindras.  Anand was a year behind me at Harvard College and has followed in his father’s footsteps in building the U.S.-India relationship.  Civic and business leaders such as Anand Mahindra and others here in Mumbai are part of the foundation for the “durable partnership” between our countries.

India’s Role in Asia and Beyond

To further this “durable partnership,” we all should focus on the strategic economic opportunity now before India.  A number of U.S. companies have reported increasing difficulties conducting business in the largest market in the region – China.  Accordingly, some companies are downgrading their operations there, while others are looking with great interest at alternative markets.

India can seize the strategic opportunity – through trade and investment – to become an alternative hub for U.S. business in the Indo-Pacific region.  Accelerating the economic and regulatory reform process already begun by Prime Minister Modi will help ensure that India is seen as an increasingly efficient, transparent, and well-regulated market.  This will improve the ease of doing business, and further promote growth and development.  Continued reforms and trade liberalization will also enable Indian products to more readily become part of the global supply chain, thereby accelerating job creation.

There are many benefits to growing our bilateral economic relationship and making India a regional hub for U.S. business.  We saw on display at last year’s Global Entrepreneurship Summit in Hyderabad the critical and positive impact that an enabling environment for innovation has on a nation’s economy.  America is a leader in entrepreneurship and innovation, and already has extensive linkages with India in the technology sector.  Opening India’s market further to U.S. trade and investment will spur our collaboration on many emerging technologies that will drive and protect our economies, including those related to advanced manufacturing, cyber security, and artificial intelligence.

Greater U.S. trade and investment, combined with a strong environment protecting intellectual property, will lead to increased flows of capital and further sharing of intellectual know-how.  Technological transformation needs a constant upgrade, which occurs when countries are involved in unimpeded international economic and data flows and avoid overreaching on policies such as data localization.

Increased openness to U.S. goods and services, and an expanded presence of U.S. companies, will also stimulate private sector investment in improved infrastructure and overall connectivity.  As an example, U.S. companies have innovative technologies that could support India’s ambitious goal to create 100 smart cities across the country.

In addition, increased heft in our economic relationship would necessarily provide a broader and deeper, long-term U.S. commitment to India and the Indo-Pacific region.  This would complement our growing defense and counter-terrorism partnership, and moderate any policy differences that might arise along the way.

IACC as an Enduring Partner

Let me conclude by noting that, from its founding in 1968 through today, the IACC has remained a strong voice advocating for increased trade and investment between the United States and India.  At times yours was a lonely voice, particularly when the government-to-government relationship was not as strong as it should have been.  But you have persevered and been a key building block and an enduring partner in the U.S.-India relationship.  With your four councils throughout India, I know that the activities of the members of this organization are critical to the economic, industrial, and commercial activities between the United States of America and the Republic of India.  The IACC and its members should be proud of what you have accomplished – the relationship we have today is constructed on the strong foundation you have helped build.

I thank you again for inviting me to speak to you this morning.  And I look forward to continuing to work with IACC and its members as we build the “durable partnership” we all want.