Home मुखपृष्ठ | News & Events | Remarks by Ambassador Kenneth I. Juster at the Inauguration of the AMR Hub National Institute of Cholera and Enteric Diseases in Kolkata 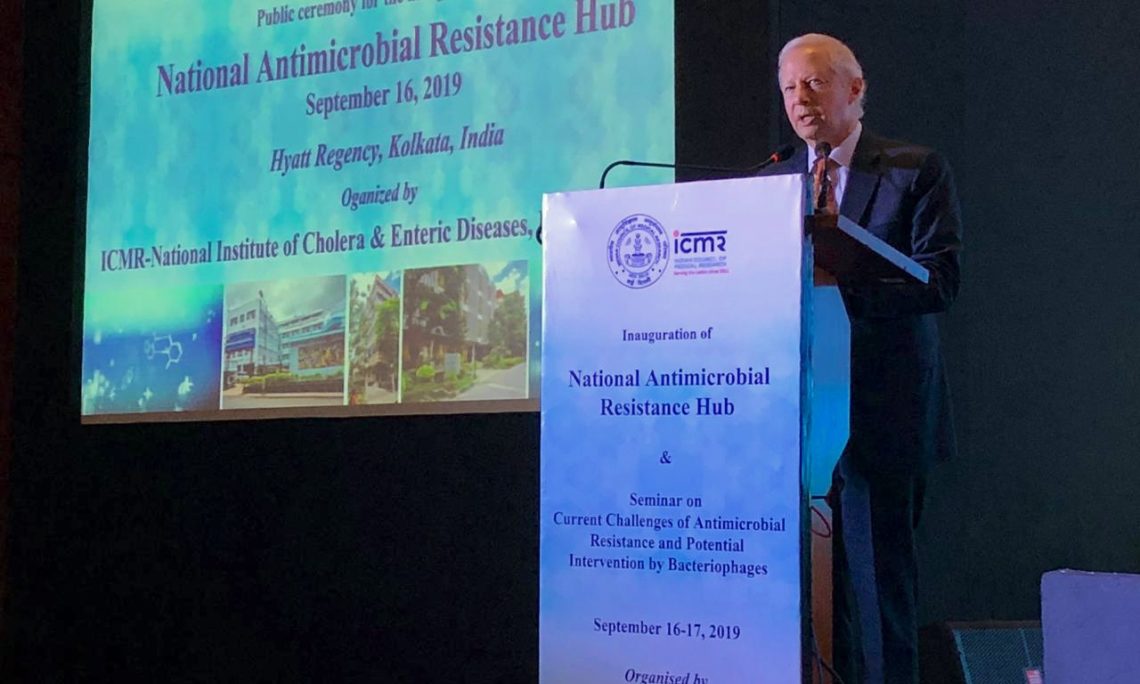 Thank you.  I am pleased to be here at the inauguration of the National AMR Hub with Dr. Balram Bhargava, Secretary of the Department of Health Research and Director General of Indian Council of the Medical Research (ICMR); Dr. Henk Bekedam, Country Representative to India from the World Health Organization; Dr. Shanta Dutta, Director of the National Institute of Cholera and Enteric Diseases (NICED); Dr. Debasis Bhattacharyya, Director of Medical Education for West Bengal; Dr. Preetha Rajaraman and my health team at the U.S. Embassy;  and other distinguished guests.

I am here with you today to support the fight against an important and urgent health problem – the issue of bacteria, known as “superbugs,” that have become resistant to commonly used antibiotics.  Global collaboration on combating antimicrobial resistance (AMR) is essential and is a key area of U.S.-India cooperation for me and my Health team across Mission India.

AMR is a Growing Threat to the World

Antibiotic resistance is one of the most important global health issues of our time.  It threatens our progress in healthcare, our food production, and our life expectancy.  It is worrisome that no new class of antibiotics has been developed in over forty years.  In the meantime, misuse of antibiotics has emerged as a significant factor in the development of AMR, due to unnecessary or inappropriate use in humans, as well as the mass administration of antibiotics to food-producing animals for growth promotion and prevention of infections.  As a consequence, the world could return to a pre-antibiotic age, where people routinely die from common bacterial infections and complications from surgeries.

Globally, resistant infections cause approximately 700,000 deaths each year.  A World Bank estimate suggests that, if we do not create solutions for AMR and this problem remains unchecked, the annual global GDP could drop by as much as 3.8 percent and cost us $1 trillion per year by 2050.  Addressing the threat of AMR requires partnerships among countries and a multi-sectoral and interdisciplinary One Health approach that recognizes the shared environment and connections among people, animals, and plants.

The United States is Working with India to Fight AMR

India and the Southeast Asian region are estimated to have the highest AMR burden across the globe.  India is therefore a natural and valued partner in the fight against AMR.  I am pleased that members of my Health team from the Embassy, including the Secretary’s Office of Global Affairs of the U.S. Department of Health and Human Services, the Centers for Disease Control and Prevention (CDC), the Food and Drug Administration (FDA), and the National Institutes of Health (NIH), are collaborating with their Indian counterparts on several aspects of AMR.

I am pleased to note that, besides the United States, more institutions in India than in any other country have made pledges to The AMR Challenge to combat AMR.  To date, ten Indian government organizations, biotechnology and pharmaceutical companies, research institutions, hospitals, and not-for-profit organizations have made commitments to the challenge.  Five of these have come from agencies in the Indian government, including the Indian Council of Medical Research (ICMR), the country’s top body for formulation, coordination and promotion of biomedical research, and one of the oldest medical research bodies in the world.

In fact, Dr. Bhargava was a keynote speaker at the launch of The AMR Challenge and highlighted the role of countries such as India in spurring innovation to treat resistant infections and stop the spread of resistant pathogens.  ICMR has pledged to support research and innovation to develop new treatments, expand surveillance, and improve antibiotic use and infection prevention and control.  It also plans to partner with groups from around the world to achieve these ambitious goals.  The establishment of the AMR Hub in India is emblematic of this commitment to addressing AMR.

CDC’s International Infection Control Program experts have been working closely with partners at the national and state level in India to conduct surveillance of infections associated with healthcare, implement focused infection prevention and control activities, enhance detection and reporting of AMR pathogens, and improve antimicrobial stewardship, which means giving the right antibiotic, to the right patient, in the right dose, at the right time.  These efforts from our U.S. agencies and institutions, along with our Indian and global partners, lay the foundation for long-term, data-driven programs to stop the spread of AMR, protect patients, and save lives.

In sum, together we can help overcome the menace of AMR by combining our knowledge, resources, and commitment to combat these “superbugs.”  We can do this in meetings between our Health Ministers, in our bilateral Health Dialogue, and in our efforts on the ground such as the AMR Hub that we are inaugurating today.  In this way, we can improve the health of the people of both of our countries as well as of those around the world.

Congratulations again on the inauguration of this important AMR Hub.