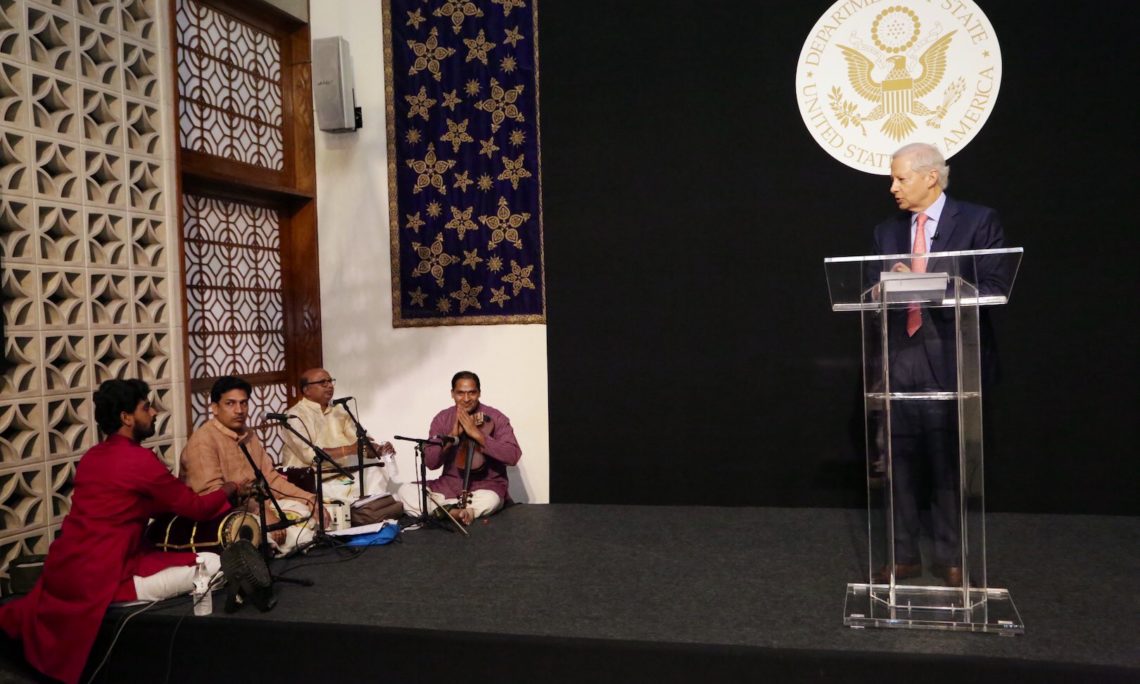 Good evening and thank you all for joining us here at Roosevelt House.  We have an excellent program this evening, featuring the dancer Lalitha Sindhuri, accompanied by a vocalist and three Carnatic musicians.

As some of you know, my colleagues and I celebrated this summer the 230th birthday of the U.S. Department of State.  I am also pleased to say that our diplomats have been working with the people of India for almost that entire time.  Indeed, this year marks the 225th anniversary of the arrival of our country’s first Consul to India.  He was Benjamin Joy, and he landed in Calcutta in April 1794.  The United States moved our Embassy from Calcutta to New Delhi in 1941.  That same year – 1941 – we hosted India’s first Mission abroad.  And we recognized India’s independent government in November 1946, even before its formal independence.

Since that time, the bonds between our countries have continued to grow stronger.  Today, we cooperate on a broad range of issues, including defense, counter-terrorism, trade, investment, energy, the environment, science and technology, health, education, agriculture, space, and so much more.  However, as I have often said, the foundation of our partnership is the enduring strength of our people-to-people ties.  And that is what we are celebrating tonight.

The citizens of our two nations have continued to draw closer together.  There are nearly 200,000 Indians studying in U.S. colleges and universities today.  Indians make over one million trips per year to New York City, San Francisco, and everywhere in between to visit family, friends, and colleagues.  There are over four million Americans of Indian descent living in the United States.  Indian culture used to be an exotic rarity in the United States, but now, thanks to your growing diaspora, has become a part of the diverse American tapestry.

If you look around, you will even see the influence of Indian culture in Roosevelt House, our chief diplomatic residence.  Earlier this year, we unveiled the Blue Room, which displays vibrant Indian-style murals.  I encourage everyone to take time to appreciate these murals in the room next door, if you have not already done so.

The U.S. Embassy is proud to play its part in bringing the people of our two countries together.  We offer exchange programs and fellowships that give Indians the opportunity to travel to the United States and build links with their American counterparts.  We connect Indian and American cultural and educational institutions.  And we sponsor cultural events that bring our music and art directly to the Indian audience.  These efforts bridge gaps in understanding and create lifelong ties that benefit both of our countries.

There are over 20,000 alumni of U.S. Government-sponsored exchange programs in India, in addition to the many more who have participated in non-government programs.  Among them is our featured performer this evening, Lalitha Sindhuri.  Ms. Sindhuri is an alumna of one of America’s premier organizations that promotes mutual understanding among the United States and other nations – the Fulbright Program – which in India is the Fulbright-Nehru Program because it is a true bilateral partnership, funded by both the United States and India, and with U.S. and Indian officials on the board of directors of our bilateral Educational Foundation.  Lalitha spent nine months in the United States in 2017 and 2018 on a Fulbright-Nehru Fellowship, where she studied dance at Barnard College and Columbia University.  Tonight, she and her accompanying musicians will be showcasing Kuchipudi dance.  I want to express my appreciation to Lalitha and the musicians for sharing their talents with us here at Roosevelt House.

Without further ado, please join me in welcoming Lalitha Sindhuri.