Home मुखपृष्ठ | News & Events | Remarks by Ambassador Kenneth I. Juster at the Cultural Performance by The Bluegrass Journeymen 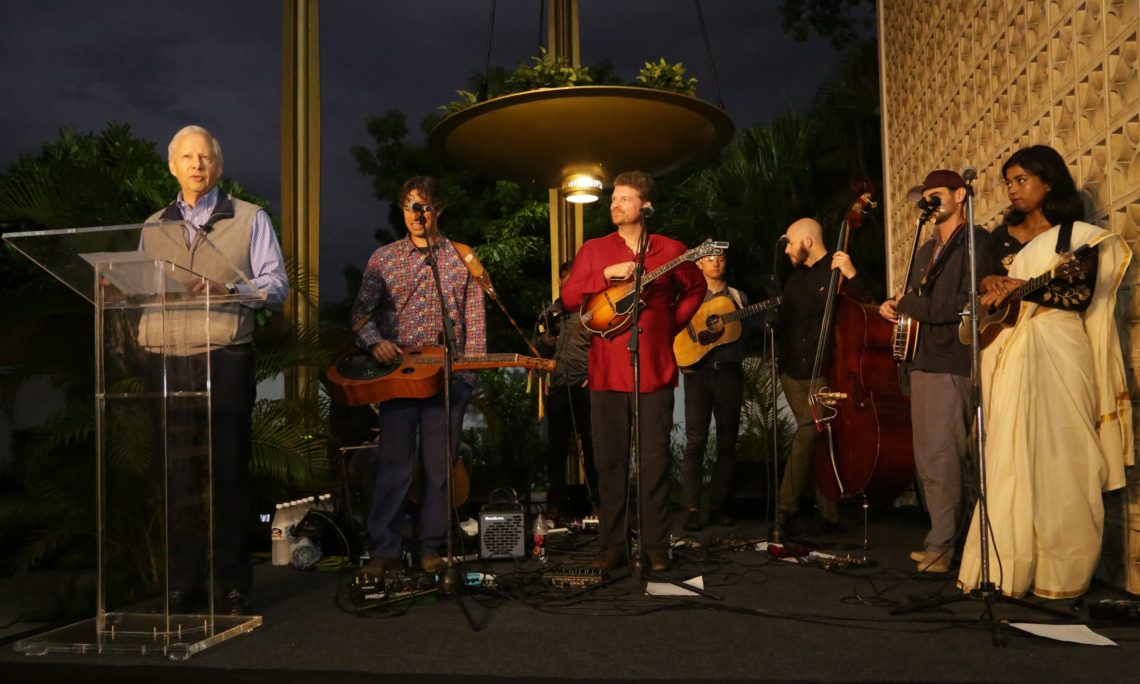 Good evening everyone.  It is my pleasure to welcome you to Roosevelt House.

Last week, President Trump was treated to what he called a “stunning display of India’s culture” during his visit to this country.  The U.S. Embassy is honored to continue the spirit of cultural exchange by introducing you tonight to a unique facet and stunning display of American music.

This evening you will take part in a Hootenanny – which is a folk music party, in this case involving bluegrass music and regional food.  The Bluegrass style of music originated in the Appalachian Mountain region of the Eastern United States.  It has its roots in traditional English, Scottish, and Irish ballads and dance tunes, as well as traditional African-American blues and jazz.  Bill Monroe and the BlueGrass Boys – who came from Kentucky, which is known as the Bluegrass State – helped popularize this style of music.  Monroe characterized the genre as:  “Scottish bagpipes and ole-time fiddlin,” and said “Bluegrass has brought more people together and made more friends than any music in the world.”

The Bluegrass Journeymen exemplify this friendly tradition, as they have returned to India each year since 2016 to collaborate with local musicians and perform at venues throughout the country.  Coming from different parts of the United States, they incorporate diverse U.S. traditions as well as Indian folk tunes, highlighting our similarities and bridging our differences.

This marks the fifth tour of the Journeymen in India.  They have experience in performing at large music festivals, jazz clubs, children’s schools, and government programs – in urban cities as well as remote villages.  At each stop, they shine a light on the relevance of folk music and community.

Introduction of the Band

The Bluegrass Journeymen were founded by mandolin player Patrick Fitzsimmons.  At age 19, he discovered bluegrass and began playing the mandolin.  In 2011, he came to India for the first time and spent three months traveling throughout the country.  This travel exposed Patrick to various forms of Indian music and gave him the idea of forming a band that would explore the similarities between traditional music of the East and West.

The Bluegrass Journeymen have just returned from the Himalayan foothills as part of our Embassy’s program of “Building Bridges through Bluegrass.”  They have been kind enough to agree to perform for us this evening.

Without further ado, let me give the floor to our guests of honor.  Ladies and gentlemen, please join me in welcoming The Bluegrass Journeymen.