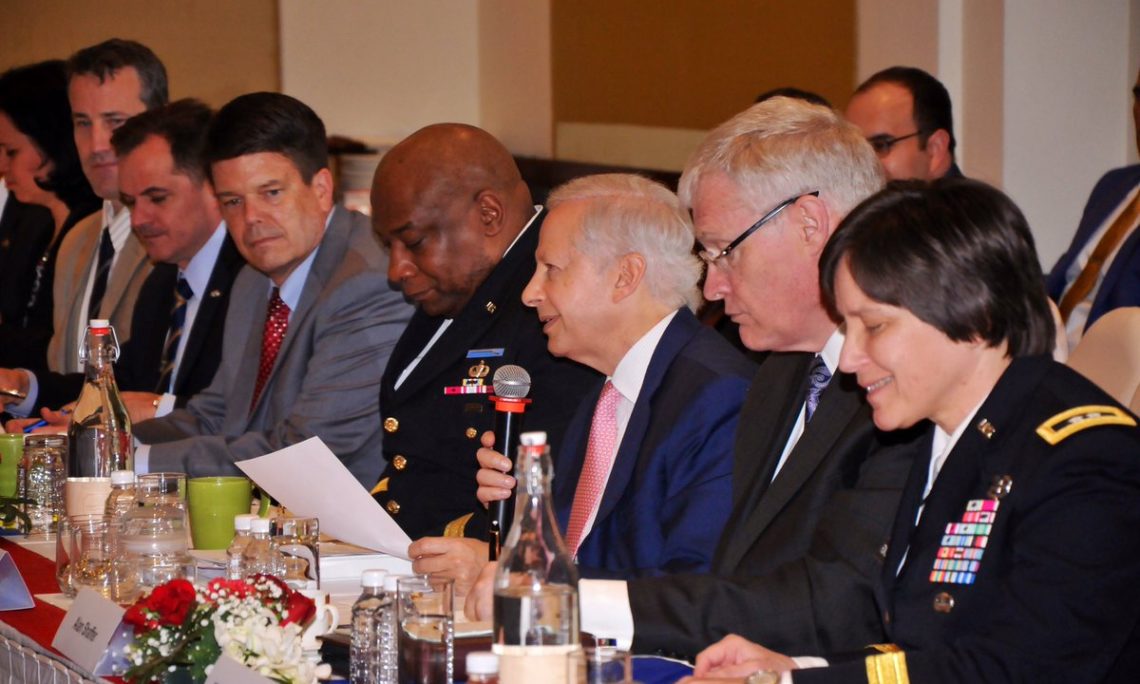 Thank you to the American Chamber of Commerce, the U.S.-India Business Council, and the U.S.-India Strategic Partnership Forum for hosting this event.  I am pleased to be joined by Mr. Alan Shaffer, Deputy Under Secretary of Defense for Acquisition and Sustainment; Lieutenant General Charles Hooper, Director of the Defense Security Cooperation Agency; and other representatives from the Department of Defense.

Last year, the Indian Armed Forces conducted more military exercises with the United States than with any other armed forces in the world, and more U.S. service members came to train with their counterparts in India than at any time in the past.  Exercises included (a) the world’s largest international maritime exercise – RIMPAC – hosted by U.S. Pacific Fleet; (b) the trilateral naval exercise in conjunction with Japan, called Malabar; (c) the fourteenth iteration of the bilateral Army-training exercise – Yudh Abhyas; (d) the third edition of Cope India, in which our two Air Forces participated; and (e) various special operations forces exercises.

In September 2018, we held the inaugural U.S.-India Ministerial 2+2 Dialogue between our Foreign and Defense Ministers in New Delhi.  The Ministerial included the signing of the Communications Compatibility and Security Agreement, known as COMCASA.  This foundational agreement will dramatically increase the sharing of valuable operational information between our two defense establishments.  Just prior to the 2+2, the United States granted Strategic Trade Authority, Tier 1 licensing status to India.

In September, the Indian Army also received its first order of Ultra Lightweight Howitzers from the U.S. government through a foreign military sales case.  The Indian military is on track to receive 145 guns over the next two years.  The majority of the guns will be assembled, integrated, and tested by Mahindra here in India.

And in December, Defense Minister Sitharaman visited Washington D.C. for meetings at the Pentagon, in the San Francisco Bay Area with our Defense Innovation Unit, and in Hawaii at the U.S. Indo-Pacific Command.

Turning to 2019, we are on track for another banner year in terms of defense cooperation.  The Indian Air Force received four of 25 ordered Chinook (CH-47) heavy-lift helicopters from Boeing on February 11.  Six more will be delivered this year.  Seventeen out of the 22 Apache attack helicopters that the Indian Air Force has ordered will also arrive this year.  The Tata Advanced Systems-Boeing joint venture constructs the fuselages for these attack helicopters in Hyderabad.

India, the United States, and Japan will again hold the annual Malabar trilateral naval exercise.  Thanks to the signing of COMCASA, there will be a much higher level of real-time information sharing among the participants than was previously achievable.

The United States and India will also hold the first-ever tri-service exercise at the end of the year, as agreed to during the 2+2 Ministerial.  And we hope to conclude other significant agreements, including the Industrial Security Annex and the Bilateral Exchange Cooperation Agreement on Geospatial information.

What are Industry’s Views on the Issues it Faces

The Indian military has an urgent need for modernization and has indicated that it plans to spend approximately $150 billion over the next ten years on modernization.  This is an enormous opportunity for all of you, but it comes with challenges.  These challenges include export licensing and releaseability on the U.S. side and management of offsets and budgets on the Indian side.  We welcome your candid comments regarding these and other challenges.

In addition, we are interested in your views on defense offsets and how at least one other country is able to negotiate an exemption from them.  We also welcome your views on the progress in India’s defense industrial corridors and the future of the India’s defense procurement procedures.  We look forward to your recommendations about what changes need to be made to improve the environment for our companies to compete on a level playing field.

With the support and commitment of everyone here today, we will capitalize on the progress we made in 2018 and seize the opportunities in 2019.  Let me now turn over the floor to Deputy Under Secretary Shaffer.