Home मुखपृष्ठ | News & Events | Remarks by Ambassador Kenneth I. Juster at the 70th Anniversary of Fulbright in India Gala Reception 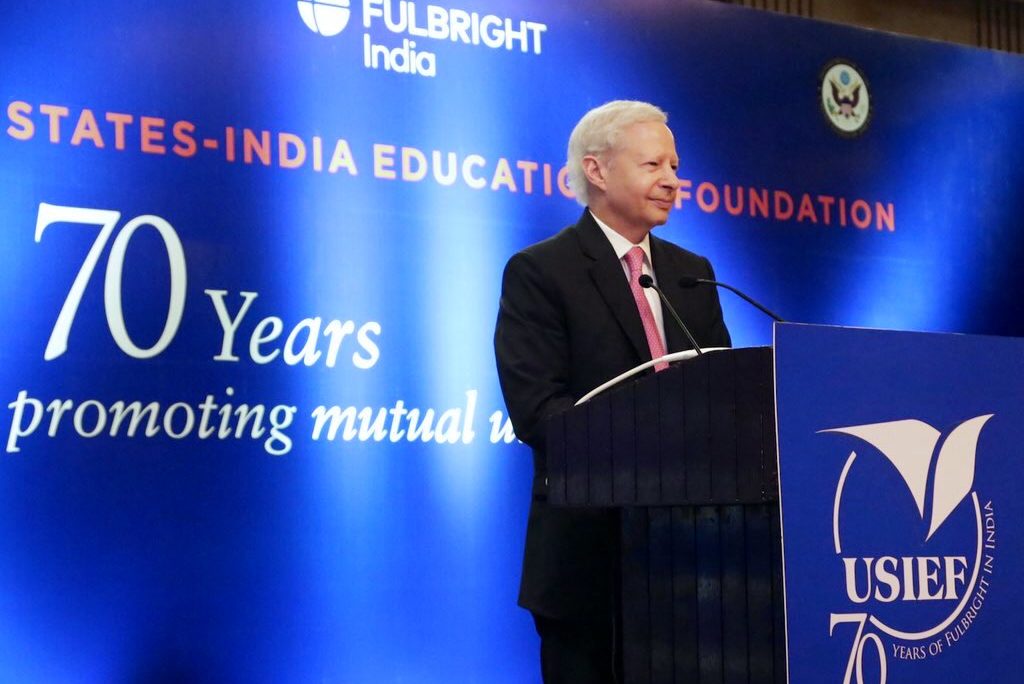 Good evening.  Let me begin by expressing my appreciation to the U.S.-India Educational Foundation – known to most of you as USIEF – for hosting tonight’s event, which marks the 70th Anniversary of the Fulbright Program in India.  This is a milestone for the Fulbright Commission and a great symbol of the strength of our bilateral relationship.  I am truly pleased to be part of this important and historic occasion.

I would like to welcome our guests from the Indian Ministry of External Affairs and the U.S. Department of State; USIEF Board members; university and college leaders; representatives from the private sector; and, of course, the many alumni and current Fulbrighters joining us this evening.

The Fulbright Program in India

Today, the Fulbright Program forms a vital link between the United States and more than 160 countries.  Since the program was created by Senator J. William Fulbright in 1946, the Fellowship has grown into the world’s premier international educational exchange opportunity.  For more than 70 years, Fulbright has provided fellowships and grants to some 390,000 American and international scholars and students.

The Fulbright Program is designed to increase mutual understanding between the people of the United States and those of other countries.  It promotes leadership development through learning and international cooperation.   Participants are chosen for their academic merit and leadership potential, and are provided with the opportunity to study, teach, and conduct research in each other’s countries, as well as simply to exchange ideas.

The binational U.S.-India Educational Foundation was among the earliest of the Fulbright Commissions.  On February 2, 1950, then-Prime Minister Jawaharlal Nehru and then-U.S. Ambassador to India Loy Henderson signed a bilateral agreement to implement a Fulbright Program on behalf of their respective governments.

Since its inception, USIEF has awarded over 11,000 Fulbright Fellowships to students from our two countries.  USIEF has also administered approximately 8,800 other awards, including the U.S. Department of Education’s Fulbright-Hays and East-West Center grants.  Thus, USIEF’s efforts have directly benefited nearly 20,000 people over the last 70 years.

Thanks to the new agreement, the Fulbright-Nehru Program has tripled in size.  India now has the largest U.S. Fulbright scholar program in the world, which provides approximately 75 grants to U.S. scholars to research and teach in India each academic year.

We see the impact of the Fulbright-Nehru program on a daily basis through the endeavors of its alumni.  Program participants have made tangible, positive impacts on this country, from curing deafness in infants to protecting India’s rich biodiversity.

I am pleased to say that many of Fulbright-Nehru’s most distinguished alumni are with us here tonight.  I urge all of you to take advantage of this gathering and introduce yourselves to each other, and hear your unique stories firsthand.

The U.S-India relationship is growing rapidly.  As I have said many times, I believe that the foundation of our partnership is our people-to-people ties.  The Fulbright-Nehru program is a perfect example of the impact that our peoples have when they learn from each other and work together.

I look forward to many more decades of successful and growing cooperation between the United States and India through the Fulbright-Nehru Program, and to an increasingly robust relationship between the academic worlds of our two countries.  Thank you for your support, and thank you for all that you do to build bridges among our future leaders through the Fulbright-Nehru Program.