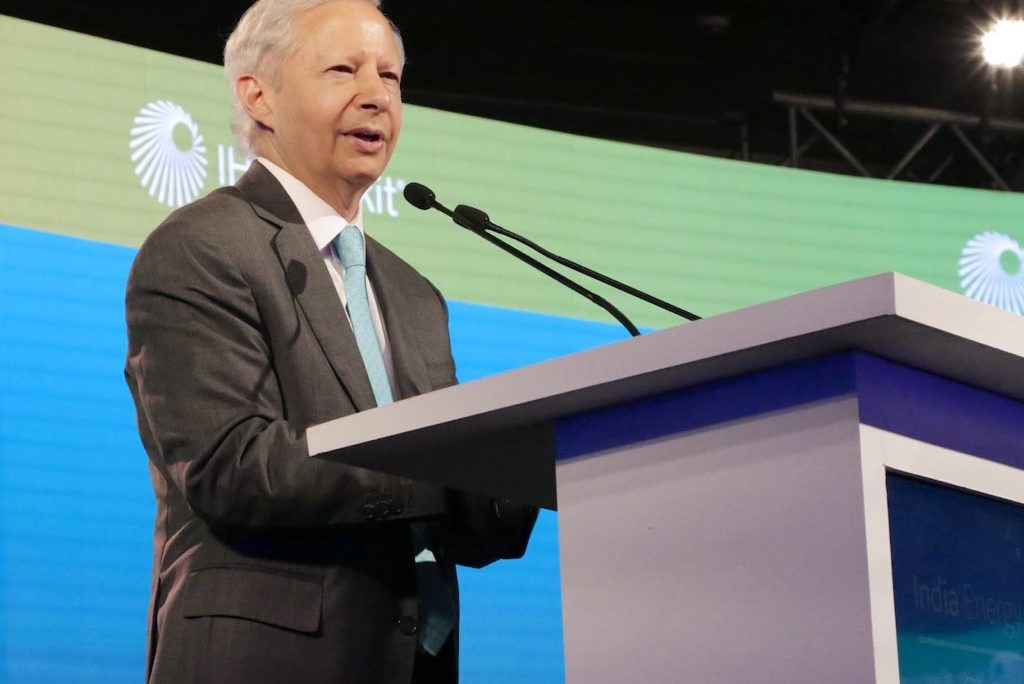 Thank you very much for that kind introduction. I thought I would try this morning to place India’s interest in energy security in the broader context of the U.S.-India energy relationship.

While I arrived in India as the U.S. Ambassador in November of 2017, I have actually been working on issues in U.S.-India relations for close to 20 years. During that time, I have seen the relationship grow and evolve – from the perspective of a diplomat, a technology executive, and an investor. From each of these vantage points, I have witnessed and appreciated the enormous opportunities in the relationship. Of course, from time to time, there have also been challenges, frustrations, and ups and downs. But if you step back and look at where we were 20 years ago and where we are today, the progress in the last two decades is truly remarkable.

The U.S.-India relationship today is as broad, complex, and rich in substance as any bilateral relationship in the world. It encompasses the entire spectrum of issues in international affairs. And, of course, the people-to-people ties, which were on full display at the extraordinary Howdy Modi event in Houston last month, provide a strong foundation and a dynamic springboard for what our nations can do together.

I say this at the outset to give you my sense of the importance of the U.S.-India relationship. I thought it would be useful now to look ahead with you to see where this relationship can go. To do so, let me focus briefly on some of the strategic challenges that, in my view, India will face over the next decade. These include managing the rise of China, dealing with terrorism, modernizing the military, promoting economic growth, and ensuring secure supplies of energy.

The Rise of China

One of the most important developments in international affairs is the rise of China as a global power. A rising China, under any scenario, presents challenges to India and the Indo-Pacific region. As the leaders of the United States, India, and like-minded countries such as Japan have thought about the future of this region, they have each articulated a vision and set of principles for a free and open Indo-Pacific.

These principles include the following:

• We want an open and inclusive rules-based order, which respects the sovereignty and territorial integrity of all countries.

• We want free and fair trade, and the free flow of goods, services, capital, and data.

• We want territorial and maritime disputes to be resolved peacefully, in accordance with international law.

• And we want a region with private sector-led growth, transparent commercial practices, and secure supplies of energy.

Based on these principles, the United States, India, and other like-minded countries will need to work together over the next decade to build out a supporting architecture for the Indo-Pacific region.

We are now seeking to identify opportunities and concrete projects that can enhance the connectivity and infrastructure of the Indo-Pacific, so as to accelerate economic growth. The U.S. Government has recently enacted programs and legislation in support of this objective. These include the Asia EDGE initiative, which stands for Enhancing Development and Growth through Energy. This initiative is designed to grow sustainable and secure energy markets across the region. We believe that India can – and should – be an important player in this process, which includes creating rules-based and transparent energy markets. Indeed, India is centrally involved in efforts to buy and sell energy efficiently across borders, including trading with Nepal, Bhutan, and Bangladesh.

The Scourge of Terrorism

The second challenge that I mentioned is terrorism. The United States and India have both suffered terrible terrorist attacks in recent years, as have too many other countries. Now, state-sponsored terrorism by Iran is affecting the security of India’s energy supplies. Iran’s recent attacks on refineries in Saudi Arabia and shipping in the Gulf present a new threat, and it is in the interest of the United States, India, and others to address it. In short, eliminating the scourge of terrorism is a key challenge for a free and open Indo-Pacific region, and for ensuring energy security.

Let me now turn to India’s defense sector, where the United States is a key partner. India is projected to spend, by some estimates, as much as $150 billion on military modernization over the next decade. India will find no better technology, and no better defense partner, should it decide to invest some of those resources in U.S. equipment.

The United States does not just offer great hardware. We also have the software and integrated networks needed for national defense. After all, it is no longer the case in today’s world that armies fight armies or navies fight navies. Now, systems fight systems, simultaneously across all domains – ground, air, sea, space, and cyberspace. Our military-to-military cooperation and defense agreements with India are ensuring that best-in-class U.S. software and systems are available to India as we work together to promote our common interests in a free and open Indo-Pacific.

Trade between the United States and India continues to expand. The latest data for 2018 show that our two-way trade is now over $142 billion. Moreover, the overall trade deficit is the lowest it has been since 2011.

However, our economic partnership is not realizing its full potential, due in part to frictions related to trade and investment. We look forward to Minister of Commerce Goyal and U.S. Trade Representative Lighthizer continuing their efforts to resolve some of our differences. We sincerely believe that an increasingly open Indian economy will produce more jobs for Indians, help integrate India into the global supply chain, accelerate economic growth, and promote India as an attractive destination for investment in the Indo-Pacific region, particularly as companies reconsider their ties to China.

Energy cooperation is a centerpiece of our bilateral economic relationship. That is why President Trump and Prime Minister Modi launched the U.S.-India Strategic Energy Partnership. This Partnership elevated U.S.-India cooperation to enhance energy security, expand innovation, bolster our strategic alignment, and facilitate industry and stakeholder arrangements. As this audience well knows, the United States is uniquely positioned to support India across the entire spectrum of energy issues – in accordance with an “all-of-the-above” strategy for energy security.

For example, in coal, U.S. exports to India rose from $1.25 billion in 2017 to $2.06 billion in 2018 – a 65 percent increase. The United States also began exporting oil to India in 2017 with 9.1 million barrels of crude. That figure reached 55.1 million barrels in 2018 – a six-fold increase – and it continues to grow. In addition, the United States is prepared to assist India in building its strategic petroleum reserves with technical assistance from the U.S. Department of Energy.

U.S. liquefied natural gas (LNG) provides another option for India as it seeks to secure and diversify its energy supplies while meeting its environmental goals. Approximately five percent of total U.S. LNG exports over the past three years have gone to India. There is much more room for growth here, especially as India builds out its LNG infrastructure.

Another area for cooperation is renewable energy. We applaud the Modi government’s ambitious renewable energy goals, including having 175 gigawatts of renewable energy by the year 2022. The United States is working with India’s Ministry of Power to support large-scale integration of renewable energy into the Indian power grid. Our recently-launched Flexible Resource Initiative will build on the success of USAID’s Greening the Grid Program and on our work with India related to innovative grid integration solutions, including battery energy storage systems, greater use of natural gas, and flexible operations of coal-based power plants.

Finally, we are hoping that Westinghouse will be able to conclude an agreement with the Government of India for the construction of six nuclear reactors, which also could have a significant positive impact on India’s energy supply, environment, and security.

In sum, Prime Minister Modi has called for India’s economy to grow to $5 trillion in the next four to five years. To reach that level, India needs secure sources and sufficient amounts of energy. We look to expand our trade and economic relationship with India, and build a more comprehensive energy partnership. These actions will benefit not just our two countries, but the broader region and the world.