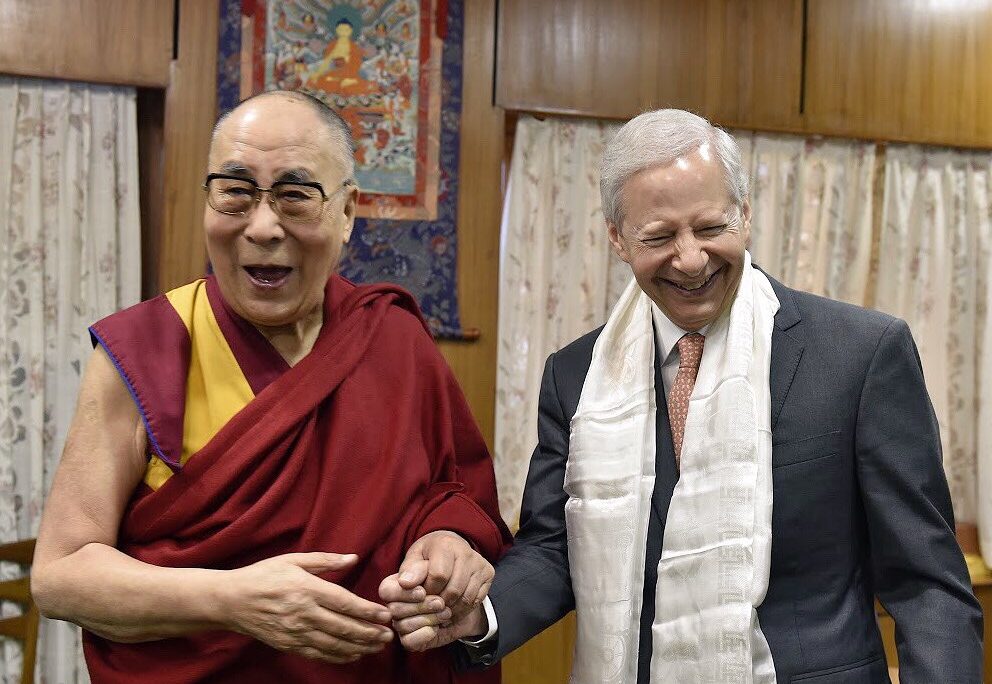 Your Holiness, it is a special privilege to know you and to be the Chief Guest at this celebration of your 85th Birthday.  The esteem in which you are held by the people of the United States is a demonstration of the deep and enduring affinity between Americans and Tibetans.  Beginning with President Franklin D. Roosevelt, who sent you the gift of a pocket watch when you were a young boy, successive U.S. Administrations, of both political parties, have admired your tireless efforts to seek freedom for Tibetans, preserve the Tibetan culture, and bring an end to strife and hostility around the world.

The presentation to you in 2007 of the Congressional Gold Medal by your friend, President George W. Bush, stands as the preeminent demonstration of the high regard in which you are held in the United States of America.  In the words of President Bush during the presentation ceremony in the U.S. Capitol, you are “a universal symbol of peace and tolerance, a shepherd for the faithful, and the keeper of the flame for his people. . . .This is why all of us are drawn to a noble and spiritual leader who lives a world away.”

I believe that the warm feelings between Americans and Tibetans spring, in part, from the recognition that yours is a just and noble struggle – a struggle to secure for your people the same self-evident and unalienable rights of life, liberty, and the pursuit of happiness that our founding fathers enshrined in the Declaration of Independence.  You may have read these words on the walls of the Jefferson Memorial, when you visited that landmark in 1991.

We like to think that these words may have had some influence on Your Holiness when you created a democratic framework for your own people.  Your abdication in 2011 of temporal authority in favor of the democratically elected Central Tibetan Administration extended to thousands of Tibetans around the world the right to chart their own destiny.  We are proud of our longstanding relationship with theCentral Tibetan Administration, which has helped support the health, well-being, and prosperity of Tibetans who have sought refuge in India.

For the American people, your work is in many ways a continuation of the legacy of Dr. Martin Luther King, Jr.  Your unwavering sense of purpose calls to our minds the words of Dr. King in his Letter from Birmingham Jail, when he wrote that “human progress never rolls in on the wheels of inevitability.  It comes through the tireless efforts and persistent work of [leaders].”  And you, Your Holiness, epitomize this very type of leadership.

We are also proud of the role that the U.S. Embassy in New Delhi, in its own modest way, has played in nurturing the affinity between our peoples.  This includes our reception in 1946 for the delegation of the Tibetan Government that congratulated my country on the end of World War II, to the late Gene Smith, whose work at the Embassy’s Library of Congress office rescued thousands of priceless Tibetan texts from the depredations of China’s Cultural Revolution.

We know how much remains at stake for your people.  And we look forward to more years of your leadership in the service of freedom for Tibetans and the survival of Tibetan culture and identity.

I would like to close by returning to President Roosevelt, whose gift to you, in some manner, may have led us here today.  Confronting a different era, when the world seemed locked in conflict, President Roosevelt remarked in his final message to the American people, that “if civilization is to survive, we must cultivate the science of human relationships – the ability of all peoples, of all kinds, to live together and work together, in the same world, at peace.”

I can think of no one who better exemplifies these words than Your Holiness.  Like the era of President Roosevelt, we too are living in challenging times, in our case due to the current pandemic.  Yet, this celebration today of your 85th Birthday and your life’s work give us great hope for the future and the promise of a more peaceful world.

Happy Birthday to you, Your Holiness, and many happy returns.