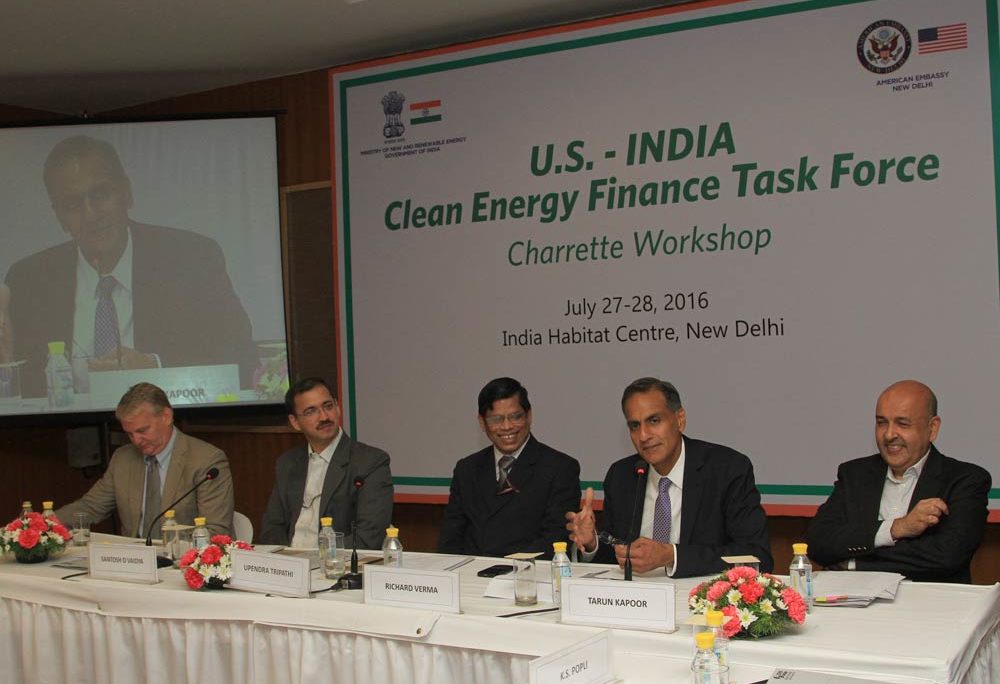 Let me start by thanking all of you for your willingness to participate in these workshop sessions and play a role in unlocking the potential of India’s renewable energy revolution.

I don’t want to overstate this, but I believe we are at a transformational moment in history.  It seems like there is a lot of change happening in the world right now and much of it is unsettling.  But there are some tremendously encouraging developments that are cause for great hope.  For example, I’ve spent some time thinking about what the countries of the world agreed to in Paris, and the hope generated there, that as a planet we may be capable of making the hard choices, and the collective sacrifices, necessary to leave a better world for our children.

It was gratifying in Paris to see the critical roles that the leaders of our two countries played in bringing that agreement to reality.  President Obama and Prime Minister Modi showed great vision and leadership in helping to map out a path to a low carbon future.  So, the vision is there, but as we are all aware, now comes the hard part.

And that is where the role of this taskforce comes in.  That same vision aimed at bending the arc of history is what motivated the Prime Minister and President Obama to establish this taskforce.  They realize that vision is not enough, that there’s a lot of hard work to be done to bring the vision to reality.

The remarkable progress in the field of renewable energy is another one of those transformational developments occurring right now that gives me great hope for the future.  The rapid advancements in hardware efficiency and lower costs are breathtaking, and generate a lot of excitement.  By contrast, the work you are doing is in many ways just as technical, but because it does not take the form of flashy new technology, it will go largely unnoticed by the public.  But the truth is, that for all of the excitement around the field of renewable energy, the revolution that must take place is not just in the realm of engineering and science, but in the way we mobilize capital. Because without affordable financing, our efforts to bring to market the cutting-edge technology needed to meet the goals agreed upon in Paris, will fail.

The third transformation that gives me great hope is the pace and scope of economic development currently taking place in India.  This transformation has the potential to lift hundreds of millions of people out of poverty in coming years, making India, and this entire region of the world, more prosperous, stable, and productive.  This prospect is, without a doubt, a positive development for all of humanity.  But it also has the potential, to further aggravate pollution and resource depletion in India, and exacerbate global warming for us all.

Expanding access to energy in India is fundamental to much of the development that needs to happen here in coming years.   Without electricity it is simply impossible to create the necessary jobs, homes, factories, offices, schools, and other infrastructure.

As many of you know, hundreds of millions of Indians are still not connected to the grid.  And estimates suggest that if India succeeds in meeting its ambitious development goals, the country’s energy consumption, which has doubled over the past 15 years, may triple or even quadruple in coming decades.

So, the challenge is clear:  India must pioneer a new and more sustainable path to development.  The Vision is clear:  India plays a leading role in adoption of solar and other renewables.  And the imperative for this task force is clear:  none of this is possible without affordable financing.  So, no pressure, right!?

It’s only about $100 billion of investment that is needed to meet the Prime Minister’s ambitious renewable targets, and allow India to meet its Paris commitments.  You’ve got two days, right?

I understand that the idea of the charrette approach is to move beyond talk, to bringing the three concepts you are working on to the reality of concrete programs.

I understand you have representatives from several government ministries and agencies.  This type of “whole-of-government approach” will be needed to meet such an ambitious goal.  The fact that on the U.S. side, we also have an interagency U.S. team working on this is a reflection of the importance we attach to this mission:  We have experts from the U.S. Departments of State, Energy, and Treasury, the Overseas Private Investment Corporation, and the U.S. Agency for International Development.

And it’s not just a “whole-of-government” or a G-to-G approach that is going to solve this problem.  I am deeply appreciative of the high level of private sector contribution to this project.  I know that many of you have dedicated many hours of pro bono work and extensive expertise to this project.  And to those of you who have traveled from the United States to participate in these sessions, your commitment is also deeply appreciated.

So, in closing, congratulations on your willingness to take up this challenge, and to be part of the solution.  I offer you my best wishes, as well as the full support of my team here at the Embassy in your efforts to transform India’s energy markets, and create a cleaner, more sustainable world for future generations.  Thanks!