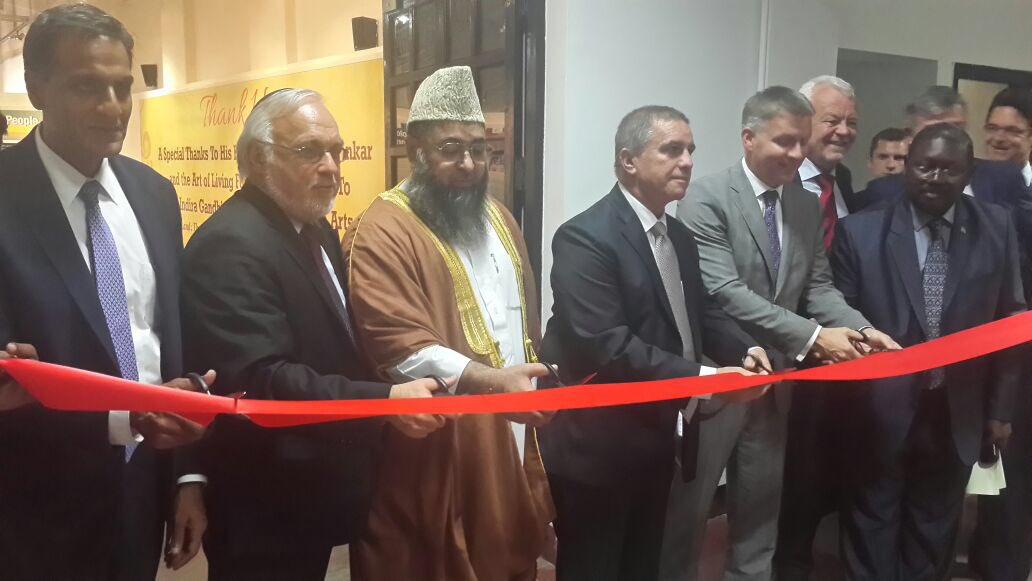 Good evening ladies and gentlemen.  It’s an immense pleasure to be here at this beautiful venue for such a special event.  I’d like to thank Dr. Joshi and his team at the Indira Gandhi National Centre for the Arts for hosting us and displaying this spectacular exhibit.  Ambassador Daniel Carmon of Israel, it’s an honor to share the stage with you.  It’s wonderful to see so many colleagues from the diplomatic corps represented here this evening, including from Japan, the Netherlands, Canada, Belgium, Germany, South Korea, and Austria.  Let me also acknowledge Dr. Imam Umer Ahmed Ilyasi, of the All India Imam Organization, and Ezekiel Issac Malekar of the New Delhi Judah Hyam Synagogue.  Thank you for joining.

A special thanks of course to Dr. Alfred Balitzer and Rabbi Abraham Cooper of the Wiesenthal Center for organizing this exhibit.  The renown of the Wiesenthal Center is second to none as are its efforts to combat hate and anti-Semitism around the globe.  Exhibits like this one honor the legacy of Simon Wiesenthal, a man who exemplified integrity, justice, and moral courage.  Rabbi Cooper, thank you for all the important work you and your team are doing at the Center.

I think it’s very fitting the Wiesenthal Center chose India for its Asia premiere of People, Book, Land.  Like Israel, India is an ancient civilization and a young nation.  India and Israel gained statehood one year apart, amidst violent partitions, but in the seven decades since independence they have become resilient democracies and innovative economies.  And of course, both share a deep and enduring partnership with the United States.

India is also the land of Gandhi, a land where many faiths and cultures have coexisted and prospered for millennia.  I’ve had the privilege of visiting over 22 Indian states in my tenure as ambassador, and witnessing the breadth of India’s linguistic, religious, and cultural diversity has been a truly extraordinary experience.  I visited Kochi in Kerala state last year, where the first synagogue in India was established nearly five hundred years ago.  The fact that Jews escaping the Inquisition were granted protection by local Indian rulers and allowed to build a synagogue speaks volumes about India’s heritage of tolerance.  Subsequent waves of Jewish migrants, including Baghdadi Jews in the 18th and 19th centuries, further enriched India’s religious mosaic.  Among these was the family of Lieutenant General JFR Jacob, the hero of the 1971 war, who sadly passed away earlier this year.

And like the Jewish people, the people of the Indian subcontinent have shared an intimate connection with their native soil for thousands of years.  That for me is among the most powerful aspects of this exhibit.  Despite periods of persecution and exile, times of anguish and sorrow, the land of Israel has always been at the forefront of the Jewish consciousness.  To build a modern democratic state in the historic Jewish homeland, in the aftermath of the Holocaust, says a lot about the strength and resiliency of the Jewish people. The Holy Land is home to many people of diverse faiths – Christians, Muslims, Jews, and others – but no one can deny the 3500 years of history binding the Jewish people to the land of Israel.

I witnessed this special bond between land and people during my first visit to Israel in 2005.  I was working as Senator Harry Reid’s National Security Advisor at the time and quite a bit of my energy was devoted to strengthening U.S.-Israel defense ties.  I remember walking the hallowed halls of Yad Vashem and taking in the sights, sounds, and smells of the Old City in Jerusalem.  It was a moving and memorable experience I’ll never forget.

And that’s why I’m so grateful for this exhibit, because it offers even those who have not visited Israel an opportunity to learn about this unique place. Through this exhibit, people will be able to experience a glimpse of the sacred connection between the Holy Land and the Jewish people and feel the reverberations of 3500 years of history.  I think this is something Indians, of all people, will keenly appreciate.  Because the resonance of history forces us to reflect, offers us endurance, and gives us hope for the future.  I’m reminded of the words of Gandhi ji who said “When I despair, I remember that all through history the ways of truth and love have always won. There have been tyrants and murderers, and for a time, they can seem invincible, but in the end, they always fall.”

I believe this exhibit, showcasing the extraordinary history of an extraordinary people over three millennia, is a testament to his words.  Thank you all for being here this evening and for bringing this wonderful exhibit to New Delhi. Shalom and good evening.