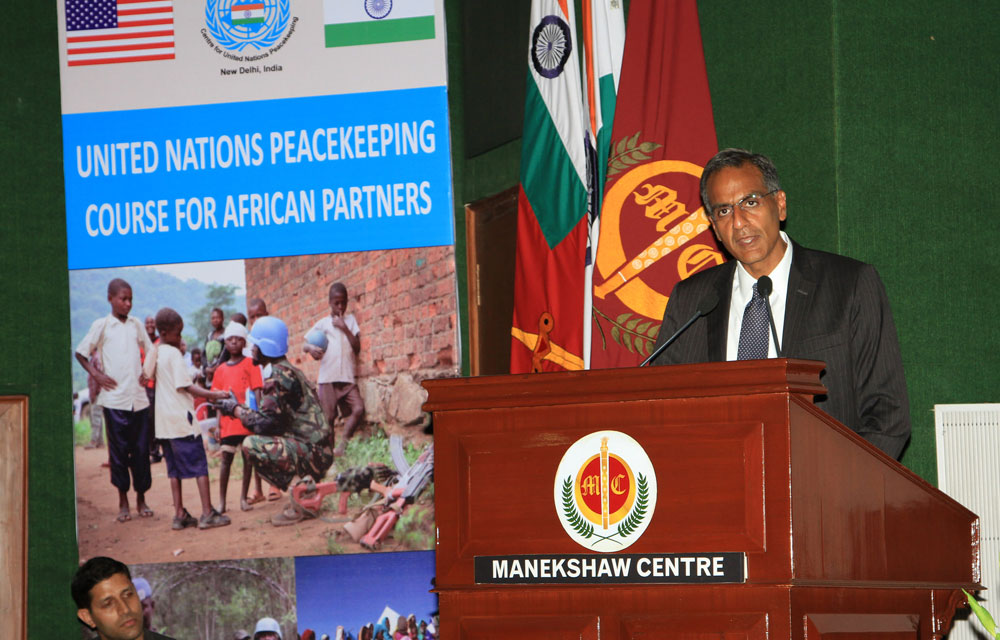 Minister Akbar, General Rai, thank you for your leadership and for hosting this wonderful reception.  It is a sincere pleasure to be here to celebrate the great work we’re doing together on UN peacekeeping and our growing cooperation with African partners.  I’d like to especially acknowledge my counterparts from the African diplomatic corps who have joined us this evening, as well as Secretary Mehta, Ambassador Akbaruddin, who travelled here from New York, and UN Resident Coordinator Yuri Afanasiev.  I know a lot of hard work went into launching this new joint peacekeeping course and everyone in this room deserves a great deal of credit.

While this course represents an exciting new endeavor in the U.S.-India partnership, the history of our cooperation on UN peacekeeping dates back nearly seven decades.  In 1950, the Indian Army 60th Field Ambulance, an elite group of medical paratroopers, was deployed by India as part of the UN mission in Korea.  During Operation Tomahawk, a daring airborne operation undertaken by the U.S. Army, these Indian troops volunteered their medical services, jumping alongside American paratroopers behind enemy lines.  For their extraordinary courage and service, General MacArthur, the American commander in Korea, awarded the 60th Field Ambulance a Meritorious Unit Commendation.

This little known story speaks volumes about the history of the Indo-U.S. security partnership and to India’s commitment to upholding the ideals of the United Nations.  Even though India was a young republic, three years into its independence, it did not hesitate to support the UN at a time of crisis.

Our growing collaboration on peacekeeping is underpinned by two fundamental principles:  one is India’s long and proud tradition of peacekeeping, which is commensurate with its global leadership.   India has participated in 48 of the UN’s 69 peacekeeping missions – a higher proportion than any other country – and many of these missions have been in Africa.

The second premise is that the United States and India share not only an important bilateral relationship, but an increasingly global partnership.  From climate change and food security to peacekeeping and regional connectivity, the United States and India are working together not only for the benefit of our two nation’s citizens but to improve lives across the globe.  Our trilateral projects with India through USAID stand as an example of what we can do together.  As Prime Minister Modi said in his recent address to the U.S. Congress, “A strong India-U.S. partnership can anchor peace, prosperity and stability from Asia to Africa and from Indian Ocean to the Pacific.”  We couldn’t agree more.

Today we commemorate a new chapter in our cooperation, by working together with third country partners in Africa to build peacekeeping capacity.   This initiative was announced at the 2015 U.S.-India Strategic and Commercial Dialogue, and I’m proud to say that in less than a year we have translated our pledge into action.  That’s pretty good timing as far as government bureaucracies go!

The goal of this training program is to build local capacity at a time when the need for well-trained peacekeepers is more critical than ever.  The nature of peacekeeping in the 21st century is constantly evolving.   Today, two-thirds of peacekeepers operate in active conflicts; the highest percentage ever.  We have seen in recent years the acute effects of state failure around the globe and the extremist elements that often fill the vacuum created by instability.  Meeting these challenges requires the international community to revamp its support for peacekeeping operations and to build local capacity.  That’s why President Obama convened world leaders at the UN in New York last year to rally new commitments to peacekeeping.  Over the past 15 years, the United States has deployed over 5,000 police officers to UN missions and contributed nearly $1 billion to train and equip partner nations.

Both the United States and India share an abiding commitment to our partnerships with African nations and to building security capacity on the continent.  As we have seen with the African Union Mission in Somalia, African nations have made major strides over the last decade shouldering security burdens in the continent.  But the demand for UN peacekeepers, especially with knowledge of local conditions and terrain, is growing in Africa and elsewhere.  It’s why we are supporting the African Peacekeeping Rapid Response Partnership and joint training courses like this one with India.

Through this course, we hope our African partners can gain valuable experience and in turn train others back home.  Our goal is to work together as equal partners, to leverage each other’s expertise, to learn from one another and thus build self-sustaining programs.  This is a collective exercise as well as a learning opportunity for the United States; we want to hear feedback from our partners on how we can improve and be most helpful.

I want to thank all of our African partners who are participating in the pilot course as well as the American instructors and India’s Center for UN Peacekeeping, including the director, Colonel Sehgal.  I sincerely hope this joint course is the first of many, and we can one day soon expand our cooperation to include Asian partners as well.  By working together, we can strengthen UN peacekeeping, build closer bonds between our nations, and make lasting contributions toward international peace and security.  These are all goals well worth striving for, and I hope this course sets a strong precedent going forward.  For those in uniform who wear the blue helmets in dangerous corners of the world, I thank you for your service.  In this critical work, the United States will be your enduring partner.  Thank you and best of luck to all the participants.