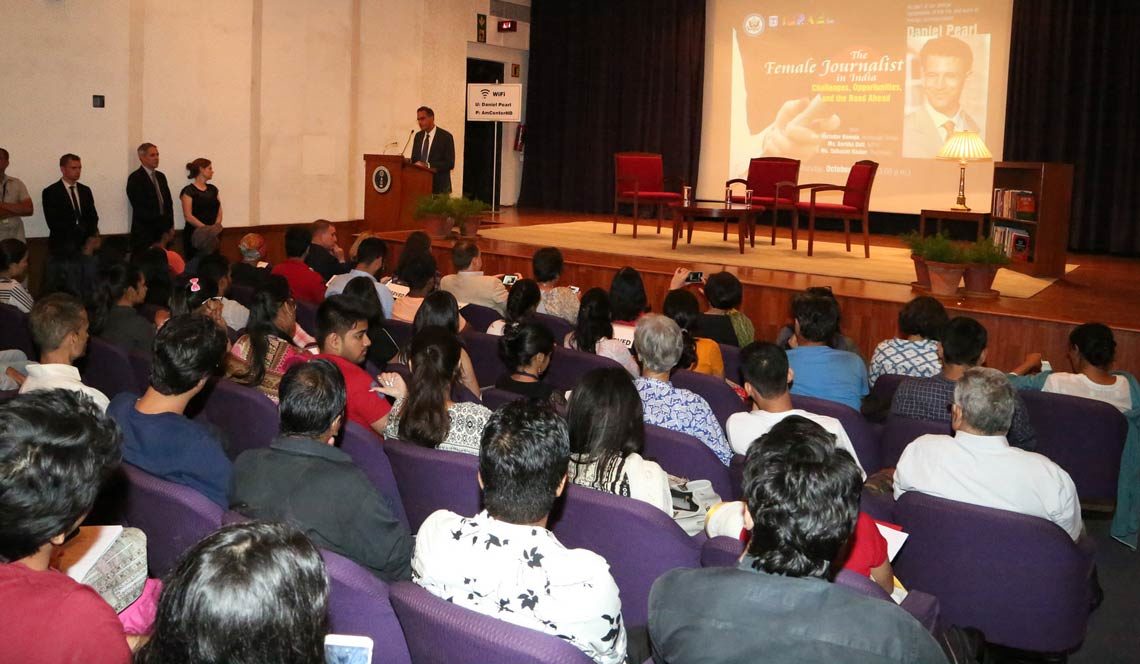 Good afternoon and welcome to the American Center.  I am delighted you could all join us for our second annual Daniel Pearl Day event, hosted with our partners at the Embassy of Israel.  It’s always an honor to see my good friend, Ambassador Daniel Carmon, who has done a wonderful job building closer Indo-Israeli ties.  I also want to thank our special guests here today, three preeminent journalists who need no introduction: Barkha Dutt of NDTV, Suhasini Haidar of The Hindu, and Harinder Baweja of the Hindustan Times.  I can tell you from personal experience they are tough interviewers, but that’s what we like about them!  You serve as role models for aspiring journalists everywhere.  Thank you for what you do and for joining us here today.

Let me begin with a few words about the man whose legacy we honor today: Daniel Pearl.  I never had the privilege of knowing Danny, but his passion for journalism and his courage, integrity, and decency resonates with anyone familiar with his life story.  Danny was an avid musician and writer, who sought to create bridges across cultures.  He was a journalist of the highest caliber, who believed sincerely in his mission to inform and to educate.

Danny was also a citizen of the United States and Israel and, at the time of his passing, a resident of India.  So I think it’s very appropriate representatives from all three nations, among others, are gathered here today to remember his life and legacy.  Our nations are defined by democratic values, including the rule of law, freedom of speech and religion, and respect for human rights.  Indeed, we have defended these fundamental values in the face of terrorists who seek to sow fear and division.  Unfortunately the menace of terrorism, which cost Danny his life, is still present in this region and around the world.  We witnessed this in the cross-border attack against the Indian Army Base in Uri, Kashmir last month.  But we remain steadfast in our mission to overcome this challenge, which is why counterterrorism is such a critical part of the cooperation between Israel, India, and the United States.

Journalism is a dangerous profession.  Reporters are on the frontlines, often putting their lives at risk.  In 2014, we sadly witnessed the death of another American-Israeli journalist, Steven Sotloff, who was killed by ISIL in Syria.  As the Committee to Protect Journalists recently reported, this is the most deadly and dangerous period for journalists in recent history.  One hundred and ten journalists were killed in the line of duty in 2015; more than double the number in 2014.  While many reporters have been killed in war zones, others have been jailed, harassed, or even killed for simply doing their jobs in non-conflict areas.  Recognizing the dangers faced by journalists, President Obama signed the Daniel Pearl Freedom of the Press Act in 2010, which is aimed at protecting American reporters around the world.  For the last five years, the Department of State has spearheaded the “Free the Press” campaign, which seeks to highlight journalists and media outlets facing persecution and censorship around the world.

Journalists have an important role to play in the fight against violent extremism.  The internet and social media offer terrorist groups potent marketing tools to reach followers around the world, raise illicit sources of funding, and to disseminate the techniques and know-how to carry out heinous attacks.  In an interconnected world, it only takes the push of a button for groups like ISIL to reach a global audience.  When journalists provide a reliable source of information, they can help counter extremist narratives, which rely on fear and falsehoods.  Journalists also help governments do a better job protecting their citizens by ensuring accountability.  As democratic societies that value and protect free speech, we have a unique responsibility to find the right balance between security, privacy, and due process.  Outside scrutiny and a free press help achieve this.

As you all know, a healthy and vibrant free press is instrumental to any well-informed citizenry and well-functioning democracy.  It shines light on corruption and fraud, champions the downtrodden and voiceless, and ensures governments are accountable to their citizens.  It was Thomas Jefferson who famously said, “Were it left to me to decide whether we should have a government without newspapers or newspapers without a government, I should not hesitate a moment to prefer the latter.”

The field of journalism has been greatly enriched by the achievements of female reporters, writers, and photojournalists.  They have made countless contributions to the profession, often overcoming daunting hurdles.  At the turn of the 20th century, it was a female journalist, Ida Tarbell, whose investigatory reporting exposed the corrupt practices of the Standard Oil Company.  This led to her being called the “most famous woman in America” by her contemporaries.  A few decades later, an Indian photojournalist by the name of Homai Vyarawalla became a trailblazer for female journalists in India.  Her famous photographs of Prime Minister Indira Gandhi and First Lady Jaqueline Kennedy adorn the walls of the U.S. Embassy.

Thanks to the contributions of pioneers like Tarbel and Vyarawalla, women are better represented in the ranks of journalism than many other professional fields.  But the unfortunate reality is they still face a myriad of unacceptable challenges their male counterparts do not.  Whether its unfair assignments, harassment, or issues with personal safety, female journalists face added hardships in an already challenging profession.  These are not just issues in India, but ones many American female journalists are grappling with as well.

So that’s why I’m pleased we are having this panel discussion on female journalists here today.  And I see in the audience there are several journalism students from some of India’s leading schools.  We are very fortunate to be joined by several luminaries of the Indian press, and some up-and-coming new reporters from the digital and print realms.  I am sure you are as anxious as I am to hear more about their experiences in India, how their situation has changed in recent years, and their thoughts on what the future holds, especially given how rapidly journalism is changing in the digital age.  I hope this discussion encourages all the young people here, especially women, to consider a career in this profession and help further breakdown barriers.  This is something Danny Pearl would have been proud to see.  Danny’s wife once described him as “an ordinary hero with a mighty heart.”  We can all learn from his example, and strive to be agents of positive change in our lives, our professions, and in how we treat each other.