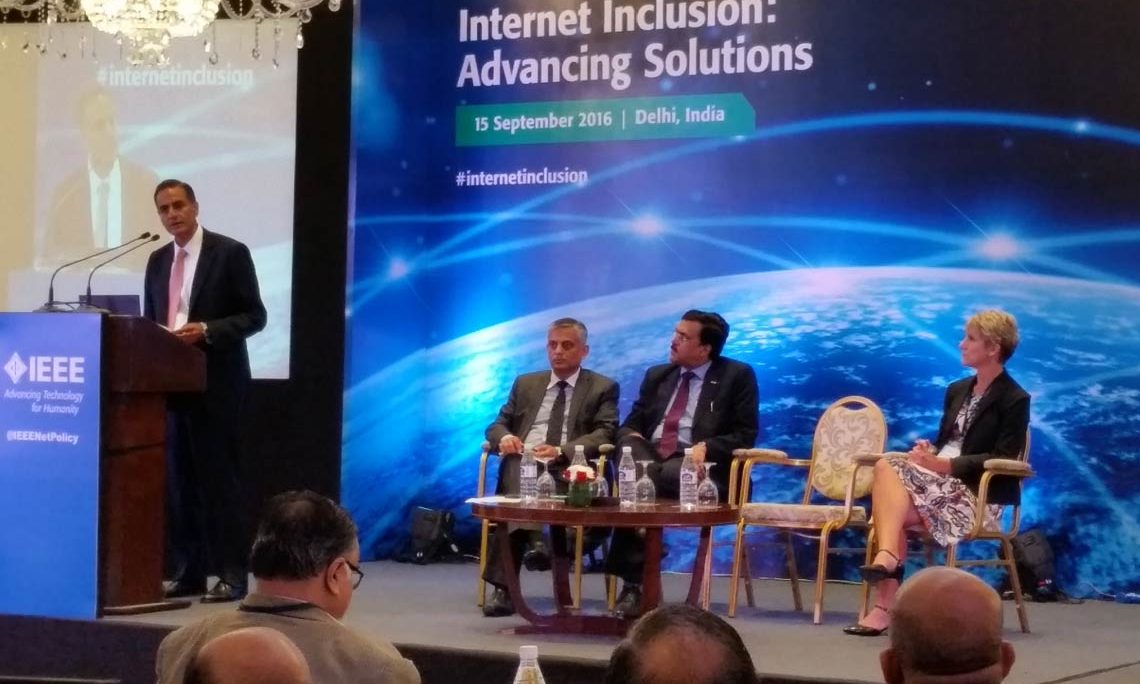 Good morning everyone.  It’s a pleasure to join you all for this important workshop on the Global Connect Initiative.  In the spirit of digital connectivity, I was initially thinking about appearing via hologram but I thought it best not to frighten our guests here today!  Let me first thank the Institute of Electrical and Electronics Engineers for their leadership organizing this event.  The United States has enjoyed outstanding cooperation with IEEE and I am happy to join such an impressive group of leaders from industry, government, and academia.  It’s also an honor to share the dais with the Secretary of Telecommunications, J.S. Deepak.  Secretary Deepak, your vision, energy, and enthusiasm to implement the Prime Minister’s Digital India and Startup India initiatives are exceptional.  Thank you for your leadership.   The United States looks forward to continuing our close cooperation with India in this important sector.

The Internet and Digital Revolutions

info.cern.ch  –  25 years ago, with this seemingly meaningless string of words, a British computer scientist named Tim Berners-Lee would forever change the world and our role in it.  Lee had created the world’s first web page, a milestone moment in the history of the internet.  For more than a quarter of a century, the internet and the World Wide Web have radically transformed how companies do business, how human beings interact, how armies fight wars, how nations rule their citizens – in short, how the world works.  As a powerful communications tool, the internet has shortened time and distance, and has become the largest repository for information and knowledge the world has ever seen.  But as dramatic as its impact has been, it is only beginning.  In Tim Berners-Lee’s words – “The Web as I envisaged it, we have not seen it yet.  The future is still so much bigger than the past.”

Ladies and gentlemen, the march of the digital revolution shows no abating.  The coming decades will witness extraordinary transformations in energy, bioengineering, robotics, artificial intelligence, genetics, cyber warfare – you name it.  And like the agricultural and industrial revolutions of previous centuries, the digital revolution will be coupled with disruptions.  The challenge before the United States and India, two democracies with 1.7 billion people, is how to minimize these disruptions and ensure the digital revolution enhances global prosperity and stability.   This will require a meeting of the minds on how we manage the global commons – which includes a rules-based approach for cyber security and cyber norms – as well as greater cooperation on building cyber infrastructure, including internet connectivity, to ensure our citizens can take full advantage of the 21st century digital economy.

Let me start on the first issue.  Our convergence on the global cyber commons and cyber security has never been closer, and our discussions never so candid.  Three weeks ago, at the second annual Strategic and Commercial Dialogue here in Delhi, I signed a Framework for the U.S.-India Cyber Relationship alongside India’s cybersecurity coordinator, Dr. Gulshan Rai.  Never before has the United States signed such a document with a foreign partner.

The Framework outlines priority areas for U.S.-India cyber cooperation, including strengthening critical internet infrastructure and undertaking skill development and capacity-building programs.  The Framework also reiterates the basic values our two nations share with regard to the internet, including the multi-stakeholder model of internet governance and respecting fundamental internet freedoms.  We look forward to working with India to fulfill the tenets of the Framework at the end of the month, when senior Indian and U.S. officials meet here in Delhi for the Cyber and Information Communication Technology Dialogues.

A critical component of the cyber commons is how we manage and counter cyber threats, such as terrorist use of the internet.  In an interconnected world, it only takes the push of a button for terrorist groups like ISIL to reach a global audience.  That’s why the Department of Justice and Federal Bureau of Investigation hosted a workshop in Delhi last week on how we can improve cooperation against terrorist groups seeking to use the internet to recruit and radicalize individuals.  By sharing expertise and best practices, we can better deal with the challenges associated with terrorist use of the internet, while respecting our respective criminal justice and constitutional systems.

Let me now turn to the other critical component of our cooperation: increasing internet accessibility and bridging the digital divide.  William Gibson, the celebrated science fiction writer, famously said: “The future is already here – it’s just not very evenly distributed.”  I think that aptly describes some of the challenges we’re seeing with access to digital technologies and the internet.  By historical measures, internet penetration has proceeded at a rapid pace: radio took 38 years to reach 50 million users, while the web took only four years to reach the same level.  But the fact remains that three out of every five people in the world are still without internet access.  This is unacceptable, because in today’s digital economy, to be unconnected is to fall behind.

That’s why the United States launched the Global Connect Initiative (GCI) last year.  To put it simply, we view internet connectivity as essential infrastructure, the same as roads, bridges, and ports.  At the inaugural GCI meeting in April, Secretary of State John Kerry and leaders from all over the world announced $20 billion in investments to help bridge the digital divide and bring an additional 1.5 billion people online by 2020.  The United States appreciated the support of IT Minister Ravi Shankar Prasad, who stated that the GCI’s goals mirror those of Prime Minister Modi’s Digital India initiative.

Since the launch of Global Connect, the United States has announced more than $1 billion dollars in worldwide financing through our development agency partners, such as USAID.  In India, the U.S. Overseas Private Investment Corporation, or OPIC, is providing $141 million in financing for a low-cost, rapidly scalable wireless broadband network, which will help bring affordable internet to unconnected villages.  I commend our colleagues in the Indian government, OPIC, and the IEEE for their support of this incredible project.

There’s a huge payoff for governments when they decide to invest in broadband connectivity.  According to a World Bank report, for every 10 percent increase in broadband access, a country can see up to a 2 percent increase in GDP.  This means digital access is one of the smartest investments that governments can make.  In the words of President Obama, “The Internet is not a luxury; it is a necessity.”

The greatest barrier to achieving universal access to the internet is often not technological.  Everyday there are technological advances, yielding more options for consumers with greater speed and efficiency.  The challenge is more often financial resources and political will.  All nations, including the United States, have to champion policies that strengthen the incentives for their telecommunications, mobile, and internet industries to invest in internet infrastructure and network coverage expansion.

India stands as a stellar example of a country that is working hard – and creatively – to expand internet connectivity.  Prime Minister Modi’s Digital India initiative highlights India’s commitment to enhancing digital capacity, across a variety of sectors, and bridging the divide between urban and rural communities.  India understands that when we talk about infrastructure today, we have to include the internet right alongside roads, bridges, dams, and power grids.  This comes as no surprise given the critical role the internet and technology have played in India’s economic rise, whether it is through e-commerce, IT services, or product and software development.

Let me conclude by underscoring why this regional workshop in India is so important.  Simply put, when it comes to internet connectivity and technology access, there’s no country more exciting than India given the scale of opportunity.  India will one day have the world’s largest middle class and the largest number of college graduates.  60% of the Indian population is under the age of 30, and by 2030, India will be the world’s most populous nation and the third-largest economy.  Two-thirds of the India of 2030 is yet to be built.  If India seizes the full potential of the 21st century digital economy, it will transform the lives of more than a sixth of humanity.  That’s a goal worth striving for.  Moreover, India can share its insights and expertise with countries that are just now embracing the importance of digital connectivity.  Even the United States can learn lessons from India, given the digital divide in our country between rural and urban areas.

25 years ago, Tim Berners-Lee never fathomed the immense impact his research and work would have on human society.  I’m confident the next 25 years will be even more transformative and who knows, an Indian scientist maybe the one who pioneers the next disruptive technology.  That’s why the case for India and the United States working together has never been so clear or compelling.  By leveraging our technological prowess and shared values, we can enable affordable internet access for those without it and strengthen international cyber norms to ensure an internet that is resilient, open, and secure.

Thank you all for your efforts to connect the unconnected, not just in India or the United States, but all over the world.  This is important work that will transform lives.