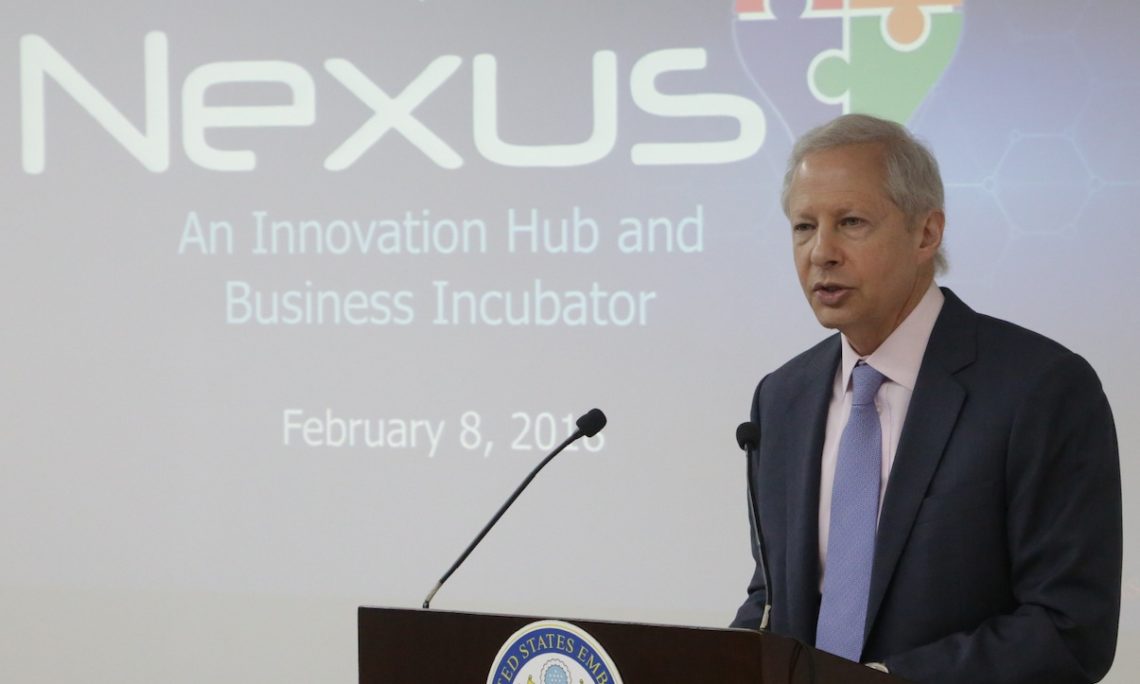 Good afternoon. On behalf of my colleagues at the U.S. Embassy, we would like to congratulate all of you who have played a role in launching Nexus: Startup Hub at the American Center. In particular, we would like to thank our partner, the IC-Squared Institute of the University of Texas at Austin, which is represented here today by the Institute’s director, Dr. Greg Pogue. Thanks as well to the Nexus founding director, Erik Azulay, and his colleagues, Rajneesh Kumar and Sameer Malik, for their dedication, persistence, and skillful handling of Nexus during its initial phases.

We are all impressed by the innovation, commitment, and determination that the Nexus entrepreneurs have brought to this endeavor. What you have already accomplished is noteworthy:

* You have presented ideas that can improve the healthcare sector through technologies that make screenings, diagnostics, and payments much easier for both doctors and patients.

* In addition, individuals in this room are poised to improve the Indian agricultural sector with state-of-the-art fertilizing machines, devices that enable rice farmers to increase productivity and profit, and organic pesticides that lower costs while protecting the environment.

* Nexus projects will also have an impact on financial technology, education, and a host of other fields.

As with all initiatives in their early phases, the road ahead may seem long and challenging. However, given the talents, drive, and innovative ideas of the Nexus entrepreneurs, I believe we will be hearing about many of you in the future.

Entrepreneurship and innovation embody the best of the India-U.S. partnership. Both of our governments appreciate the critical and positive impact that an enabling environment for entrepreneurship and innovation has on a nation’s economy and overall progress. We saw evidence of this last November, when India and the United States co-hosted the Global Entrepreneurship Summit in Hyderabad. Through training workshops, mentoring sessions, and hundreds of impromptu networking opportunities, the Summit enabled entrepreneurs to pitch their ideas, build partnerships, secure funding, and create innovative products and services that will have a significant impact on our societies.

The theme of the Summit was “Women First, Prosperity for All.” Women entrepreneurs represent a tremendous, largely untapped pool of talent for economic growth and prosperity. However, they often face barriers to building businesses that their male counterparts simply do not encounter.

To help address this problem, we are pleased to announce that the U.S. Department of State has committed to expanding our Nexus offerings by providing special training, mentoring, and networking opportunities for female entrepreneurs throughout India. This program is designed to support and empower women with entrepreneurial interests who are currently studying at India’s leading universities.

We are also pleased to announce the official launch of South Asia Connect at Nexus. Inspired by the early successes of Nexus, the State Department’s Bureau of South and Central Asian Affairs has elected to provide a second grant to the IC-Squared Institute. This grant supports the expansion of the Nexus offerings – including training, mentorship, and networking opportunities – to startups in Bangladesh, Bhutan, Nepal, and Sri Lanka. The American Center and IC-Squared, through Nexus and South Asia Connect, will help foster an increasingly dynamic, integrated, and innovative startup ecosystem across the region.

Finally, we would like to extend our thanks to the members of the Nexus Advisory Board for taking time out of your busy schedules to help guide this initiative. Some of you have reviewed the work of the first two cohorts of startups and selected a few to continue on for longer-term incubation. Many of you have joined the Nexus network of mentors and, therefore, continue to guide affiliated startups. Your contributions and support are a vital part of what Nexus – and indeed the American Center – are all about: a physical and virtual space where people with complementary talents and expertise converge to explore new, innovative business models.

Thanks to all of you and a special word of good luck to our young entrepreneurs.