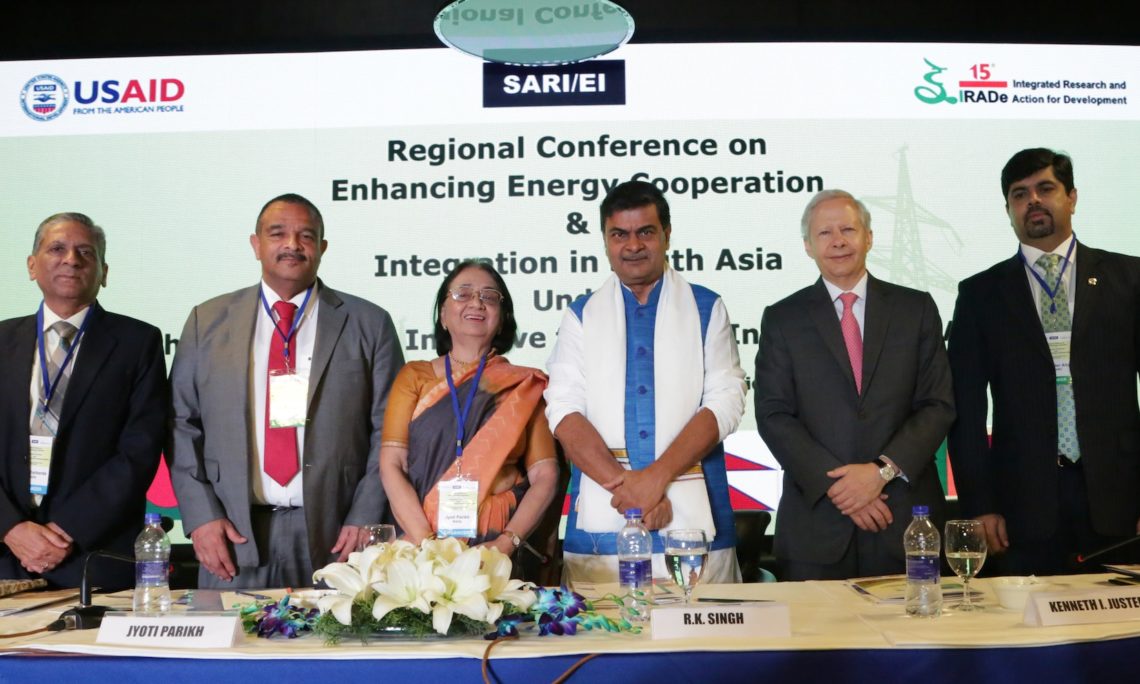 New Delhi: At a public event organized by the United States Agency for International Development (USAID) and Integrated Research and Action for Development (IRADe), Shri RK Singh, Honorable Minister of Power of the Government of India, and Kenneth I. Juster, U.S. Ambassador to India, inaugurated the Regional Conference on Enhancing Energy Co-operation and Integration in South Asia.

Access to reliable, affordable, and clean energy is a high priority for each country in South Asia to sustain economic growth, social development, and prosperity in the region.  Increasingly the countries are looking beyond their own borders to meet energy requirements.  The two-day conference celebrates the work undertaken by the USAID-funded South Asia Regional Initiative for Energy Integration (SARI/EI) over the last six years.  The conference brings together more than 100 participants, including senior officials from South Asian countries, policy makers, energy experts, think tanks, and multilateral banks to discuss and deliberate on a roadmap for a more integrated energy network in South Asia.

During his special address at the inaugural session of the conference, Ambassador Juster said, “I applaud all our colleagues in the region for joining in this pursuit of regional grid integration.  The United States is proud to partner with each country to ensure energy security, expand prosperity, and promote a rules-based order in South Asia.”

South Asia has a vast diversity of energy resources, particularly hydropower and renewable energy.  With rapidly rising energy demand across all the countries in the region, there are huge opportunities for regional development and the optimization of available energy resources through an interconnected power system, enabled by cross-border electricity trade.  Presently, approximately 2500 MW of electricity are traded in the region, a figure expected to double by the end of 2020.

Minister Singh, while delivering the keynote address, stressed opportunities for collaboration on cross-border power trade:  “Power trade will enable sharing of competitive advantage and will bring prices down for everyone in the region.  We have seen the benefits of power trade bilaterally and we must now extend it regionally.  There is a huge journey ahead which we have to do together.”

Mr. Ali Haider Altaf, Director of Energy at the South Asian Association for Regional Cooperation (SAARC) secretariat, in his special address listed the various initiatives undertaken by SAARC to improve energy integration in the region.  He said, “The SAARC Framework Agreement for Energy Cooperation was signed in 2014 to develop a market for electricity.  It has been ratified by six countries till date and will allow unrestricted cross-border trade of electricity.  A forum of the SAARC Energy regulators has also been established to promote regional energy integration.  The SAARC Energy Centre is actively pursuing the overall objective of regional integration in energy.”

Dr. Jyoti Parikh, Executive Director of IRADe, welcomed dignitaries and outlined the goals of the conference.  She also highlighted some of the key achievements of the SARI/EI program, including the first mock exercise for a regional power exchange platform, the establishment of a network of think tanks in the region, capacity building for more than 500 people, and 20 extensive studies on regional connectivity.

The conference witnessed the release of key reports including the “Compendium of Electricity Regulations of SAARC Countries,” “Framework & Guidelines for Non-discriminatory Open Access in Transmission for Facilitating Cross Border Electricity Trade in South Asia,” and “Macro-economic Benefits of Power Trade in the Bhutan, Bangladesh, India, and Nepal Region.”