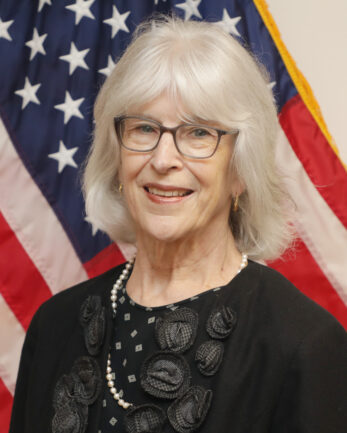 Ambassador A. Elizabeth (Beth) Jones spent 38 years in the U.S. Foreign Service, where she achieved the highest rank of Career Ambassador. Her senior assignments included: Assistant Secretary of State for Europe and Eurasia, Assistant Secretary of State for the Near East (Acting), Ambassador to Kazakhstan, Principal Deputy Special Representative for Afghanistan and Pakistan, Deputy Permanent U.S. Representative of the U.S. Mission to the UN, Principal Deputy Assistant Secretary for the Near East, Senior Advisor for Caspian Energy Diplomacy, Executive Assistant to Secretary of State Warren Christopher, Deputy Chief of Mission, U.S. Embassy, Bonn and Deputy Chief of Mission, U.S. Embassy, Islamabad. She recently served as the Coordinator for Afghan Relocation Efforts. Her other overseas posts included Kabul, Cairo, Amman, Baghdad and West Berlin.

Ambassador Jones served on several nonprofit boards, including the Middle East Institute, the Atlantic Council, IREX, the Eurasia Foundation for Central Asia, the American Academy of Diplomacy, the Institute for the Study of Diplomacy at Georgetown University, Supporters of Civil Society in Russia, the Una Chapman Cox Foundation and Ascend Athletics.

Beth Jones has a master’s degree in International Relations-Strategic Studies from Boston University and a Bachelor of Arts degree from Swarthmore College. She is married to Don Ruschman and has two adult children.