Richard Verma serves as the 25th United States Ambassador to India. He was nominated by President Obama in September 2014 and confirmed by the U.S. Senate in December 2014. Ambassador Verma oversees one of the largest U.S. Missions in the world, including four consulates across India and nearly every agency of the U.S. government.

Ambassador Verma was previously the Assistant Secretary of State for Legislative Affairs, where he led the State Department’s efforts on Capitol Hill. He worked in the Senate for many years, serving as Senior National Security Advisor to the Senate Majority Leader and he also worked in the House of Representatives. He is veteran of the U.S. Air Force, where he served on active duty as a Judge Advocate. His military decorations include the Meritorious Service Medal and Air Force Commendation Medal. 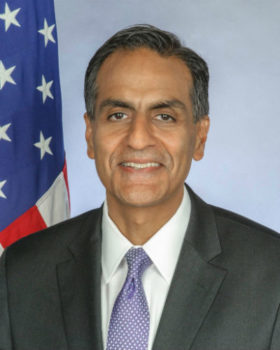 The Ambassador also has a distinguished career in the private sector, serving as partner at the global law firm of Steptoe & Johnson LLP, and as Senior Counselor to the Albright Stonebridge Group.  He served as a commissioner on the Prevention of Weapons of Mass Destruction and Terrorism Commission and is a co-author of their landmark report, “World at Risk.”  He was also a National Security Fellow at the Center for American Progress, a DC-based think tank.

Ambassador Verma is the recipient of the State Department’s Distinguished Service Award, the Council on Foreign Relations International Affairs Fellowship, and was ranked by India Abroad as one of the 50 most influential Indian Americans. Ambassador Verma holds degrees from the Georgetown University Law Center (LLM), American University’s Washington College of Law (JD), and Lehigh University (BS).

Ambassador Verma on his two years in India