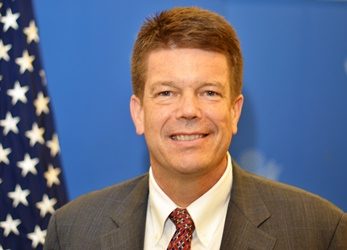 Robert G. Burgess assumed the post of U.S. Consul General in Chennai on August 6, 2017.  As Consul General, he is responsible for American interests and promoting U.S.-India relations in the Indian states of Tamil Nadu, Karnataka, and Kerala and the Union Territories of Puducherry and the Andaman and Nicobar Islands.

Robert Burgess previously served as the director of the Office of Regional Affairs in the Bureau of South and Central Asia at the State Department in Washington, D.C.  Prior to that, he was Deputy Chief of Mission at the U.S. Embassy in Dushanbe, Tajikistan.  Other diplomatic posts include Bishkek, Kyrgyzstan; Baku, Azerbaijan; Lilongwe, Malawi; and Karachi, Pakistan.  His other Washington assignments include deputy director of the Office of Central Asian Affairs.  In his pre-foreign service life, Robert worked as an attorney.

Consul General Burgess, who hails from Waukegan, Illinois, has a Bachelor of Arts in History from Colorado College.  He also holds a Juris Doctor degree from the University of California, Hastings College of the Law, and an MBA from the University of Texas at Austin.  He is a 2012 graduate of the U.S. National War College with a Master of Science in National Security Strategy.