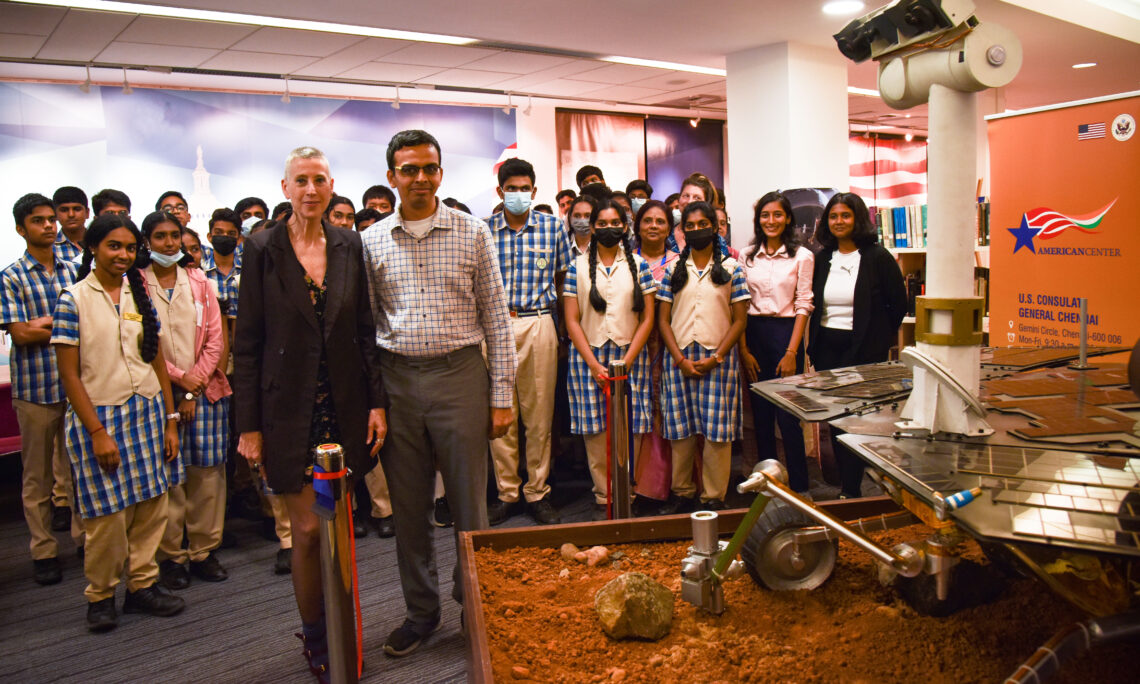 Full-scale model of NASA’s Mars Rover Opportunity on exhibit and open to the public at the U.S. Consulate General Chennai

The American Center, located inside of the U.S. Consulate General Chennai, invites students, teachers, and science enthusiasts to visit the new Mars Rover exhibit. Built by Cornell University students, the full-scale model was previously on display at the Smithsonian’s Air and Space Museum in Washington D.C. and at the U.S. Pavillion during the 2020 World Expo in Dubai. The temporary interactive exhibit, tailored to visiting school groups, features activities built around the Mars Rover and space exploration. The exhibit will be open to the public Monday through Friday between 10:00 a.m. and 4:00 p.m. through January 2023. School groups must book slots in advance by contacting the American Center.

NASA’s Opportunity was launched in 2003 and landed on Mars in 2004 with the goal of searching for evidence that water once existed on the planet’s surface. The Opportunity made several key discoveries during its mission, including evidence of the previous existence of water on Mars and conditions at that time could have been suitable for sustaining microbial life. The rover explored the Martian terrain for almost 15 years, far outlasting her planned 90-day mission.

U.S. Consul General Chennai Judith Ravin said: “In 1970 – 52 years ago – here in Chennai people were talking about moon rocks and lunar exploration – and hoping to inspire young generations of Indians to understand more about the moon-earth system… Today, you are here to see the Mars Rover, renowned for its planetary exploration… The technologies developed in support of space exploration have real-world applications that affect all of us, from advancements in telecommunications and satellite navigation to agricultural monitoring and weather forecasting.”

The Consul General added: “Our U.S. and Indian scientists and engineers have an opportunity to work together to change the world… We hope that the ties between our two countries in the space sector, including between NASA and ISRO, will continue to expand with future missions to Mars and beyond. We hope this exhibit will inspire students such as yourselves to explore all the opportunities that lie ahead for you in the space sector as you begin to think through what you want to study and where you work. We hope that many of you will take inspiration from today’s visit to explore a career or further education in the field of space – the emerging future and the ‘final frontier.’”

Plan to Visit the American Center Chennai:  The American Center in Chennai is part of a network of nearly 700 American cultural and information centers across the globe.  Since 1947, the Center (formerly and still sometimes known as the American Library) has played a special role in fostering relationships between the people of the United States and South India.  There is something for everyone at the American Center — from English language workshops to entrepreneurial mentoring to sessions on U.S. higher education and film screenings.  The American Center is a platform for Indians and Americans from all walks of life to come together to engage on issues of common and global interest.