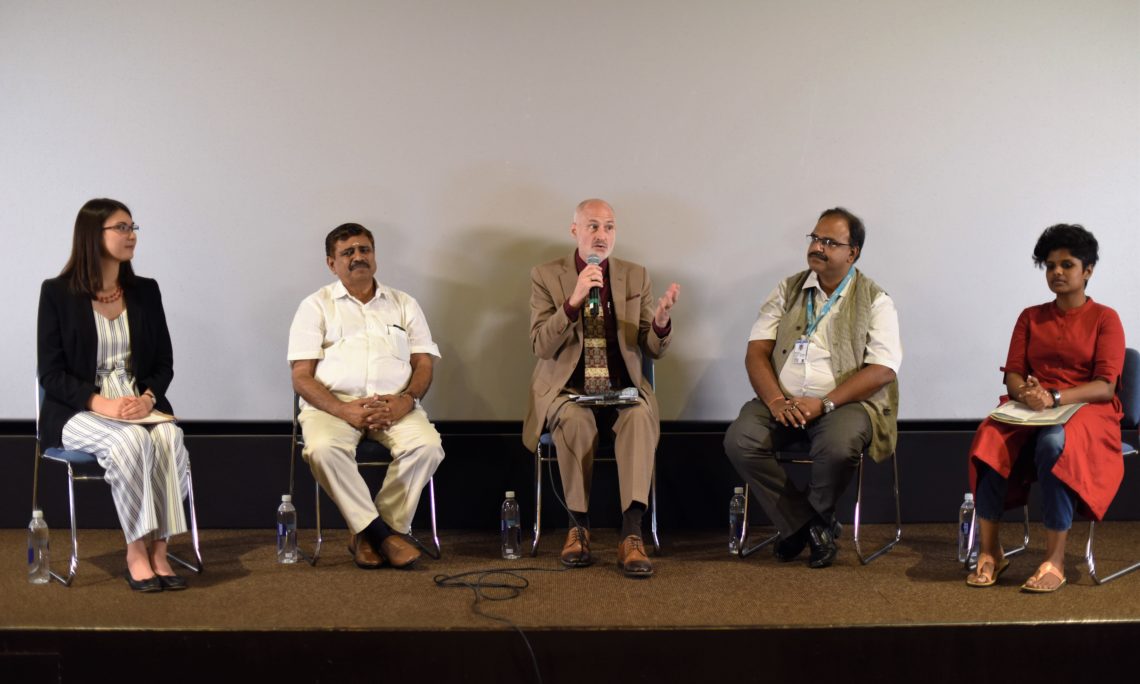 Chennai, July 31:  The U.S. Consulate General, Chennai in partnership with Netflix, UNICEF, and SPI Cinemas hosted a screening of the Oscar-winning documentary Period. End of Sentence on July 31 at Sathyam Cinemas.  The screening was followed by a panel discussion on how menstrual health and hygiene impact women’s social and economic empowerment.

Coimbatore-based social entrepreneur, Mr. Arunachalam Muruganantham, inspired the short film.  He invented a machine to produce a low-cost sanitary napkin in 2006, which transformed the lives of thousands of women across India and the world.  Mr. Muruganantham has received numerous national and international awards including the Padma Shri Award for this invention.

UNICEF Communications Specialist Mr. Sugata Roy said during the panel, “Addressing menstrual hygiene is imperative to achieve the Sustainable Development Goals around girls’ health, education, and sanitation.  It is also about gender equality by empowering girls and women by busting the age-old myths and misconceptions surrounding menstruation.”

The U.S. Consulate General’s Acting Public Affairs Officer Moulik Berkana said, “Inadequate sanitation and myths around menstruation harm the development of girls and often prevent their full engagement in school, the workplace, and society.  That is why my colleagues in USAID are working to provide safe sanitation facilities and education, to de-stigmatize menstrual hygiene and promote equity and opportunity for the most vulnerable populations.”

About the film:  Period.  End of Sentence won the Academy Award (Oscar) for Best Documentary Short Subject in 2019.  The 26-minute film follows a group of girls and women in Hapur village, 60 kms from New Delhi and their experiences with installing a machine that would make low-cost, biodegradable sanitary napkins.  This would not only create a micro-economy for the women in the village, but would allow hundreds of adolescent girls in the village to return to school and pursue their dreams of higher education and a career in the future.  Most importantly, the pad-machine would break the taboo against menstruation and highlight the importance of women’s health and hygiene.  (https://www.thepadproject.org/)