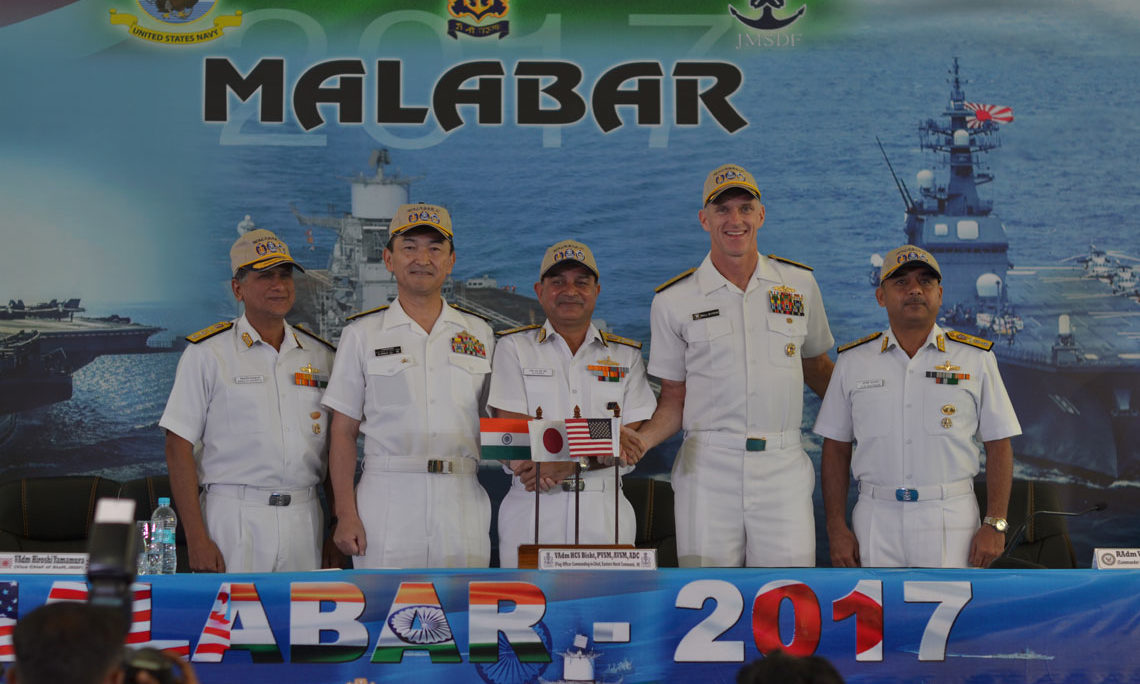 July 11, 2017 | Op-Ed by Chargé d’Affaires MaryKay Carlson in the Times of India

Billions of dollars’ worth of commerce and millions of tons of cargo move through the Bay of Bengal each year, but this week the Bay is especially active as vessels from the US Navy, Indian Navy, and the Japanese Maritime Self-Defense Force are in Chennai for the 21st iteration of combined naval exercise Malabar.

We are honoured that India is welcoming thousands of US sailors who will build upon our countries’ strong relationship and forge new friendships. This year’s Malabar exercise will be the largest and most complex in years.

The aircraft carrier USS Nimitz and her strike group will participate, as will, for the first time, the Indian Navy aircraft carrier INS Vikramaditya and the helicopter destroyer JS Izumo, the largest ship in the Japanese fleet. Malabar 2017 will involve over 7,000 US personnel on board four surface ships carrying close to a 100 aircraft.

Starting July 10 and going until July 17, Indian, Japanese and US naval forces will come together to sharpen their skills. Experts will exchange best practices and crews will practise communication, search and rescue, antisubmarine operations, boarding tactics, and more.

By spending a week working and training side by side, participants from all three countries will learn from each other, build interoperability, and make sure we are prepared to work together in any future mission. On shore, American sailors will experience Chennai’s history and culture by visiting schools, seeing the sights, and playing sports with local teams.

Exercises such as Malabar play a critical role in ensuring that those of us who operate in the Indo-Pacific region are ready to protect our shared interests, whether we are responding to the threat from piracy or to humanitarian disasters.

This June, ships from the US and Indian navies rushed to Sri Lanka to assist with medical and disaster relief when floods gripped the island nation. Our navies are often the first responders when crisis strikes. Building maritime partnerships, enhancing interoperability, and increasing joint capacity help foster security and stability in the region.

Two weeks ago when he met with President Donald Trump in Washington, Prime Minister Narendra Modi highlighted the Malabar exercise and the importance of freedom of navigation, overflight, and commerce. President Trump noted that our militaries are working every day to enhance cooperation, and both leaders encouraged more maritime security cooperation.

The United States welcomes India’s growing defence capabilities and its commitment to a common set of principles for the region, according to which sovereignty and international law are respected.

The week of exercises and exchanges will be dramatic, with ships from three great seafaring nations assembling in the waters off Chennai and their aircraft crossing the skies. But as impressive as it is, Malabar is only a small part of the growing US-India partnership.

Whether we are talking about our joint efforts to stabilise Afghanistan, the campaign to defeat international terrorism, the work of our scientists to combat emerging health threats, or efforts to spur global entrepreneurship, our two nations – and the world – benefit when India and the United States work side by side for common purpose.

Once again, thank you to our hosts – the Indian Navy and the city of Chennai – for everything you have done to make Malabar 2017 a success, and allow me to join you in welcoming the sailors of the US Navy and the Japanese Maritime Self-Defense Force to India. Forward together!

DISCLAIMER : Views expressed above are the author’s own.

The writer is the Chargé d’Affaires at the US Embassy in New Delhi.